The ManpowerGroup Employment Outlook Survey for Q4 2019 was conducted by interviewing a representative sample of 5,131 employers in India

In what could be good news for job-seekers, Indian employers have reported upbeat hiring intentions for Q4 (September to December) 2019.

With 20 percent of employers anticipating an increase in payrolls, none forecasting a decrease and 52 percent expecting no change, the resulting Net Employment Outlook is 20 percent. 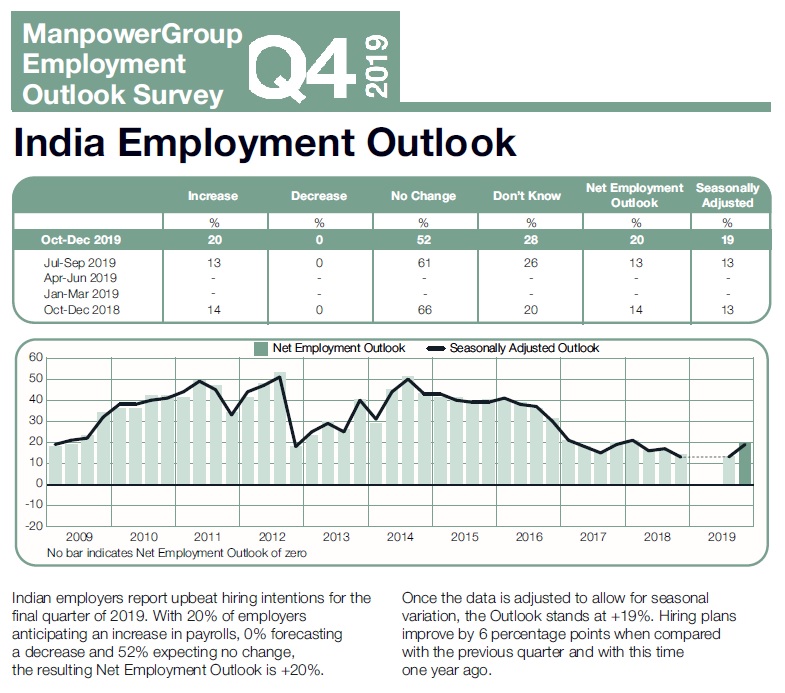 The ManpowerGroup Employment Outlook Survey for Q4 2019 was conducted by interviewing a representative sample of 5,131 employers in India.

All survey participants were asked, “How do you anticipate total employment at your location to change in the three months to the end of December as compared to the current quarter?"

Once the data is adjusted to allow for seasonal variation, the Outlook stands at 19 percent. Hiring plans improved six percentage points when compared with the previous quarter and at the same period a year back.

Also read: Looking for a job? Head to these cash-rich startups

Employers expect to increase payrolls in all three organisation sized categories during the forthcoming quarter.

However, medium employers report the strongest hiring intentions with a Net Employment Outlook of 23 percent. Among others, the Outlook stands at 17 percent for large employers and 10 percent for small firms.

Regional comparisons
Workforce gains are expected in all four regions during the upcoming quarter. The strongest labour market is anticipated in eastern India, where the net employment outlook of 38 percent reflects robust hiring prospects.

Steady hiring activity is forecast for the south and west, with outlooks of 19 percent and 18 percent, respectively. Outlook for the north stands at 16 percent. In a year-over-year comparison, employers in the east report a sharp increase of 23 percentage points.

Sector-wise comparisons
Employers anticipate payroll gains in all seven industry sectors during the Q4 2019. The strongest labour market is forecast for the public administration and education sector, where the net employment outlook stands at 27 percent.

Optimistic hiring plans are also seen in the wholesale & retail trade sector and the services sector, with outlooks of 25 percent and 22 percent, respectively. Elsewhere, employers expect steady hiring activity in manufacturing, with an outlook of 16 percent, and in finance, insurance & real estate sector, where the outlook stands at 14 percent. 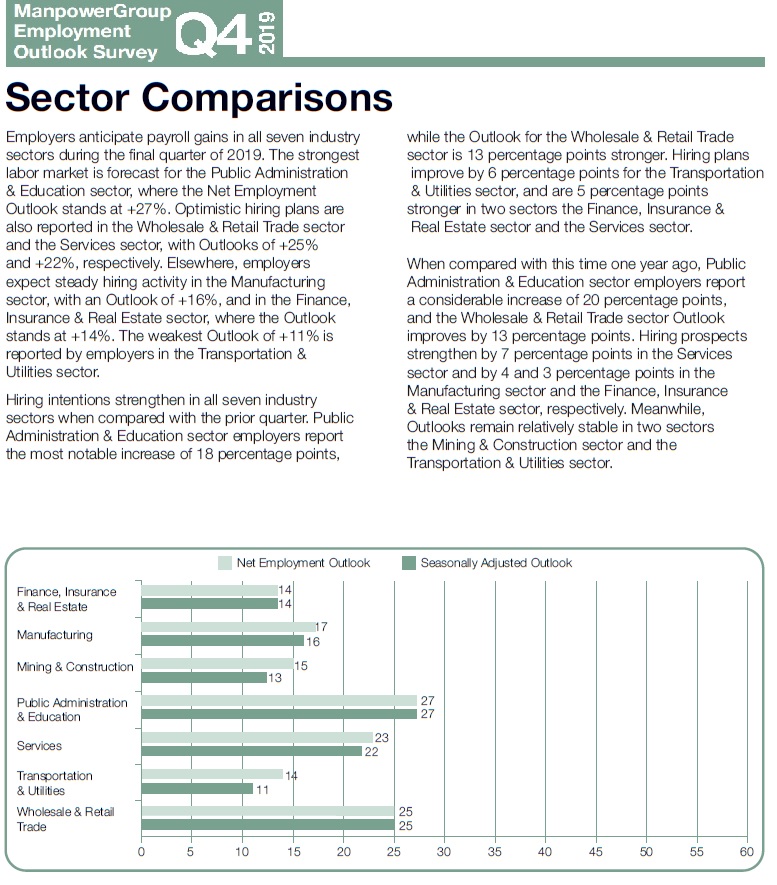 The weakest outlook of 11 percent is reported by employers in the transportation and utilities sector.

The ManpowerGroup Employment Outlook Survey has been structured to be representative of each national economy. The margin of error for all national, regional and global data is not greater than plus or minus 3.9 percent.

Coronavirus impact on masks and sanitisers