In the year, when the pandemic restricted trade, upended logistics networks and shut down factories, India's exports to China rose 27.7 percent in FY21. A closer look at official figures however show that the growth was fueled by higher prices of iron ores, organic chemicals and petroleum.

In the year when global trade was plagued by the pandemic and India's exports to most nations across most categories suffered, shipments to China increased to $ 21.2 billion in FY21 from $16.6 billion in FY20.

While offering hope to policymakers, the rise of more than 27 percent was still considered baffling, especially when exports to India's northern neighbor had fallen by 0.8 percent in 2019-20, even before the pandemic.

But rather than being a sign of sudden growth in India's industrial prowess or export clout, in-depth assessment shows higher global commodity prices was the main driver of this growth, government officials said.

Most of this is due to iron ore exports from India, 86 percent of which was shipped to China in 2020-21. Half of the $ 4 billion increase in exports to China in FY21 ($ 2.1 billion) came from iron ore exports, government officials said, pointing to data reviewed by Moneycontrol. 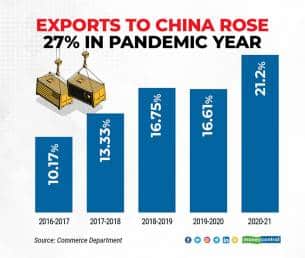 This becomes clear when seen in the context of iron ore prices, which have skyrocketed since November.

Similarly, about a billion dollars worth of the growth came from downstream products which were also affected by higher iron ore prices. This included export of various products made of iron and non-alloy steel.

"The value of shipments carrying product categories such as semi-finished and flat rolled iron and steel products saw a boost in FY21," a senior Commerce Department official said.

The largest consumer of metals and other construction products on earth, China has seen prices of hot rolled steel coils, cement and copper all climb by more than 30 percent, according to Reuters.

Other commodities such as organic chemicals and petroleum constituted the third and fourth largest exports to China. Prices of both commodities had seen an uptick in 2020.

Higher amount of cumin seeds and chili peppers are also finding their way to China, led by growing appetite for Indian cuisines.

From being the third-largest destination of Indian exports, China has now become the second on the list. China's importance in India's overall exports has continued to incrementally rise over the last four years, with shipments to China now constituting 7.3 percent of all exports, jumping up from 5.3 percent. 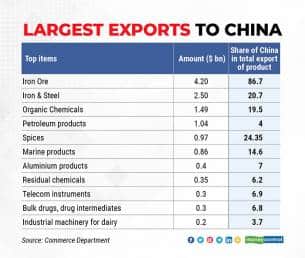 Overall, the sudden rise in global prices of key input materials such as steel, chemicals and plastics over the past 4 months have helped India's exports recover.

Ironically, this comes even as the Commerce Department has been aggressively trying to raise the share of value-added manufactured goods in the overall export basket.

"We have believed for some years now that long-term dependence on raw materials would be inherently detrimental to the export sector. At the least, it would rob the industry the chance to transition to higher value products, up the value chain," a senior Commerce Department official, said.

Interestingly, a report by the Confederation of Indian Industry (CII) has pointed out that since 2012, China itself has increasingly banked on imported commodities. "Beijing has instead, focused its efforts and state-run industries on creating a large pool of value-added products which fetch greater price in global markets," a senior trade policy expert said.

As the Chinese economy has transitioned to higher levels, a better educated populace, coupled with government policy has led to an accelerated growth in high-technology items, such as telecommunications equipment, automotive products, cellphones, he added.