Here are top 25 stocks held by LIC; will it have to cut stake before IPO?

Apart from IDBI Bank and LIC Housing Finance, the insurer holds more than 15 percent stake in firms like TCM, Gloster and ITC which it may have to bring down prior to its listing

Life Insurance Corporation of India (LIC) is all set to bring out its public issue. Being the largest institutional investor, LIC holds (as of December 31, 2019) stake in as many as 364 BSE firms. However, the insurer still holds more than 15 percent stake in nine companies which it will need to bring down.

As per insurance regulations, a company in the sector can buy upto 15 percent in another firm. A special exemption has been given to LIC to hold 51 percent stake in IDBI Bank. The Reserve Bank of India (RBI) has given the insurer 12 years to bring down the stake.

An analysis by Moneycontrol showed that apart from IDBI Bank and LIC Housing Finance (a wholly-owned subsidiary of LIC), LIC holds more than 15 percent stake in firms like TCM, Gloster, ITC, Simplex Realty and Standard Batteries as of Q3FY20. 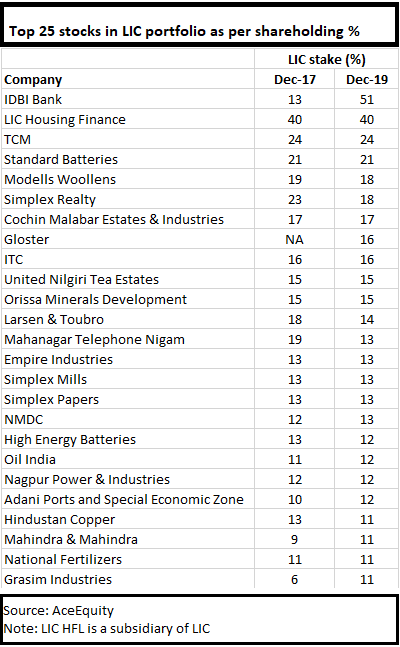 LIC also holds 18.24 percent stake in UTI MF and has been given time till December 2020 to bring down its stake to below 10 percent. This is even as UTI MF has begun the IPO process.

In legacy firms like ITC and Larsen & Toubro (L&T), LIC has traditionally held a higher stake. While LIC is below the cap in L&T with 14 percent, it is still above the 15 percent cap in ITC.

M R Kumar, LIC chairman, said on February 7 that there was some rebalancing happening as far as the equity shareholding was concerned. He added that the endeavour was to bring to follow the cap in firms like ITC where it had more than 15 percent. However, he did not give any timeline for this purpose.

Finance minister Nirmala Sitharaman, in her Budget 2020 speech on February 1, said that the government would divest its stake in LIC through an IPO. With the ministry giving a H2FY21 as the deadline for the listing of LIC, the insurer will be mandated to reduce its cross-holding in other listed firms.

Since LIC is a large institutional investor, any investment decision taken by the corporation affects the equity market as a whole. Abrupt pulling out of money by LIC from any stock is seen as a negative signal by the market and also impacts the behaviour of other market participants.

Data compiled by Moneycontrol showed that LIC's total equity holding value was at Rs 5.98 lakh crore at the end of the June quarter of FY20.

Among the sectors, LIC has invested across sectors like banking, realty, mining, power, oil and gas as well as textiles.

Similarly, in the case of Axis Bank and Punjab National Bank where LIC held 14 percent stake two years ago, it has brought it down to 9 percent and 5 percent respectively at the end of December 2019.

The insurance regulator is keen that LIC pare down its stake in other companies to 15 percent or below. But this reduction has to be gradual, Insurance Regulatory and Development Authority of India (IRDAI) Chairman Subhash Chandra Khuntia said.

"We would like LIC to bring down their stake in firms to below 15 percent. But this cannot happen before the (proposed) IPO. The reduction cannot be instant because it will lead to disruption and prices may get impacted. We will be fixing a timeline," said Khuntia on February 7.

Earlier, the Insurance Regulatory and Development Authority (IRDAI) gave time till December 2018 for LIC to bring down its stake to 15 percent or below in legacy investments like L&T, Corporation Bank and ITC among others. However, considering LIC investment corpus and the investee companies’ positions, the deadline was indefinitely extended.