Economic benefits of drones outweigh rare instances of them being used as weapons, says Drone Federation of India chief

Smit Shah weighs on weaponisation of drones and its implications for the nascent industry as he talks about how these unmanned aerial vehicles are increasingly being deployed in diverse fields and gaining acceptance.

The Unmanned Aircraft System Rules, 2021, was notified by the Centre on March 12.

The recent drone attack on the Jammu airbase has added a whole new dimension to the security threat in the country, with these unmanned aerial vehicles capable of wreaking havoc in a matter of minutes. What is more worrying is that these are also hard to detect.

Several recent sightings in sensitive areas along Jammu, which shares a border with Pakistan, has once again put the spotlight on drones. Players in the industry are quick to point out that it is not drones that are dangerous but the explosives they carrying.

Weaponisation of drones is the latest worry for the Indian security establishment but these unmanned aerial vehicles have been put to good use as well. From delivering vaccines in Telangana to helping corporations like the National Thermal Power Corporation in the inspection of its plants, spraying pesticides to ward off swarms of locusts to monitoring Covid containment zones in, drones are finding desparate use.

In an interview, Smit Shah, Director, Drone Federation of India, talks about the uses of drones, their prices and how one can become a drone pilot. Edited excerpts:

Are there any international regulations to prevent the use of drones in the kind of attacks that have been seen in Jammu and Kashmir and other places?

Are drones being used as weapons one of the flipsides of the global usage of drones?

The best way to answer this question is through an example. Economic benefits from the car industry outweigh the rare instances of a car being used as a bombing instrument. The same is true of the drone industry. Since the technology is quite new, it may seem like a threat and as we start analysing the threat and we conduct more research into the subject easy to deploy technology will emerge to identify and counter the threats from drones.

Is there any drone policy being developed in India to prevent drones from being used as weapons?

Do you think drones being used by alleged terrorists against Indian security will have any ramifications on use of drones in the other sectors?

What does anti-drone technology involve? Can you shoot down a hostile drone?

The anti-drone technology typically consists of three parts —first is detection to detect whether there is a drone or a flying object or not, then comes identification—whether the flying object is actually a drone or not and whether it is actually a threat or not. Then comes counter mechanisms. So basically detect, identify and neutralise. There are multiple technologies to take counter- actions to neutralise drones. For example, jammers, laser weapons, guns and smaller missiles in case the drone is large enough.

What are the rules for buying drones?

The UAS Rules 2021 laid down by the Ministry of Civil Aviation (MoCA) and guidelines by the ministry of defence govern the manufacture and selling of drones.

For civil purposes, an authorisation of manufacturer is needed which is given by the Directorate General of Civil Aviation (DGCA) and an airworthiness certificate, which is issued by the Quality Council of India (QCI) and notified by DGCA. Earlier, DGCA issued provisional certification to drone models but now it is in the hands of QCI.

What does QCI look at when certifying a drone?

QCI looks at various design analysis reports, test reports and conducts flight tests to ascertain that the drone model is safe to fly. A detailed criteria and process is available on the QCI’s website.

How long does the certification normally take?

Since the certification has just started, we are yet to see how long the process will take. It is expected that QCI should be able to certify each model in less than a month.

What goes into making a drone? 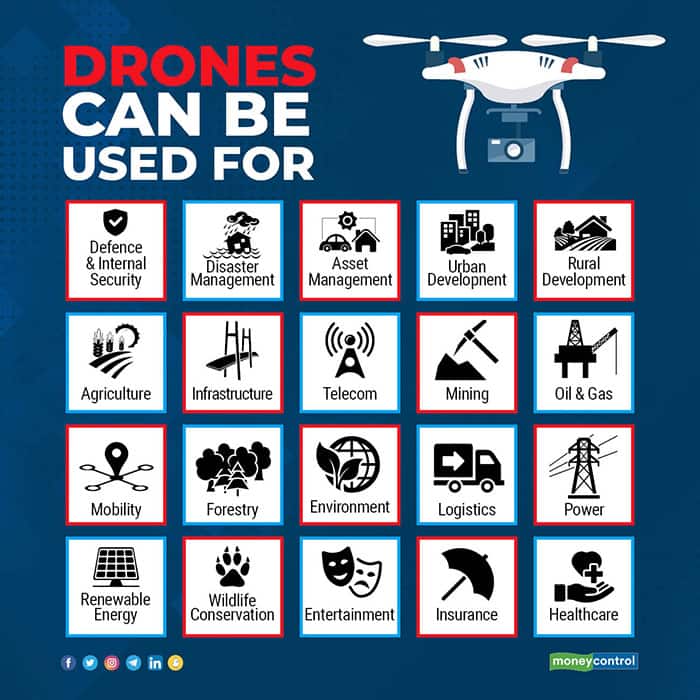 What obstacles do the industry and users of drones face in India?

The DigitalSky platform needs to be launched with airspace maps. Processes for licences need to be streamlined. The government may create focused-funding programmes and various financial incentives and infrastructure support for supporting Indian manufacturers of drones.

How does one get a licence to be a drone pilot?

A person requires training from a DGCA-authorised drone training school. The MoCA website shows that currently there are 16 drone schools in the country and 21 drone models have been certified.

What are the rules for operating and flying drones?

As per the Unmanned Aircraft System Rules 2021, the Indian airspace is divided into three zones:

-- Red Zone: Usually a no-fly zone where you can only fly with the permission of the Centre.

-- Yellow Zone: The area around airports involving possible proximity to manned aircraft. To be able to operate a drone in the Yellow Zone, you need permission from the respective Air Traffic Controller.

Permission for each zone is issued by the DigitalSky platform and governed by No Permission No Take off (NPNT).

At the moment, since the DigitalSky platform is being developed, most drone operations are happening through exemptions.

How long does it take to train a drone pilot?

DGCA mandates a five-day training course, which includes about two-and-a-half days of ground school that includes various subjects related to general aviation, weather, components of a drone and assembly of a drone. Another two days of flying school, which includes conduct of various flying exercises with the drones and a few tests as a part of the final evaluation.

Where is the training done?

There are multiple training schools across the country notified on the DigitalSky platform.

What percentage of the drone market in India is used for commercial and recreational activities?

About 10-15 percent of all drone operations in India are recreational. The rest include use of drones for commercial purposed like aerial cinematography, surveying, mining and agriculture spraying.

How much does a drone cost?

A spraying drone for agriculture may cost between Rs 7 to Rs 10 lakhs.  Defence drones being used for patrolling and surveillance could cost Rs 1 crore.

The larger drones purchased for strategic and tactical purposes could cost a few hundred crores.

Industry players do not compare the pricing based on category since it seems like comparing a toy car with a Rolls Royce or a racing car.

Which are the biggest selling drones in the country?

They are from different manufacturers. Till recently DJI was selling a lot of recreational drones, which are seen in photography and other related activities like weddings and concerts. Indian manufacturers have also taken a lead in various commercial and defence sectors.

Drone usage is penetrating various industries across the world. In India, drone usage is penetrating very aggressively in various industries. It is now being used for survey applications, inspection of bridges, inspection of telecom towers and monitoring of construction projects include rail, road and other. It will soon become a very common tool for any company. Major use is also being seen in emergency response and defence applications.
Ashwini Phadnis Senior journalist based in New Delhi
Tags: #aviation #drones #interview
first published: Jul 5, 2021 11:15 am