Larsen and Toubro (L&T) sales grew 24 percent year-on-year (YoY) in the third quarter ended December 2018 led by good execution in projects and services businesses. The performance eased the Street worries on order inflows and possibly a slow execution. Sales beat estimated growth of 12-16 percent. Order inflows were down 12 percent YoY at Rs 42,200 crore but in line with the management's expectation of a slowdown ahead of the elections, also precisely the reason for Q2FY19 order inflows growing at nearly 46 percent. 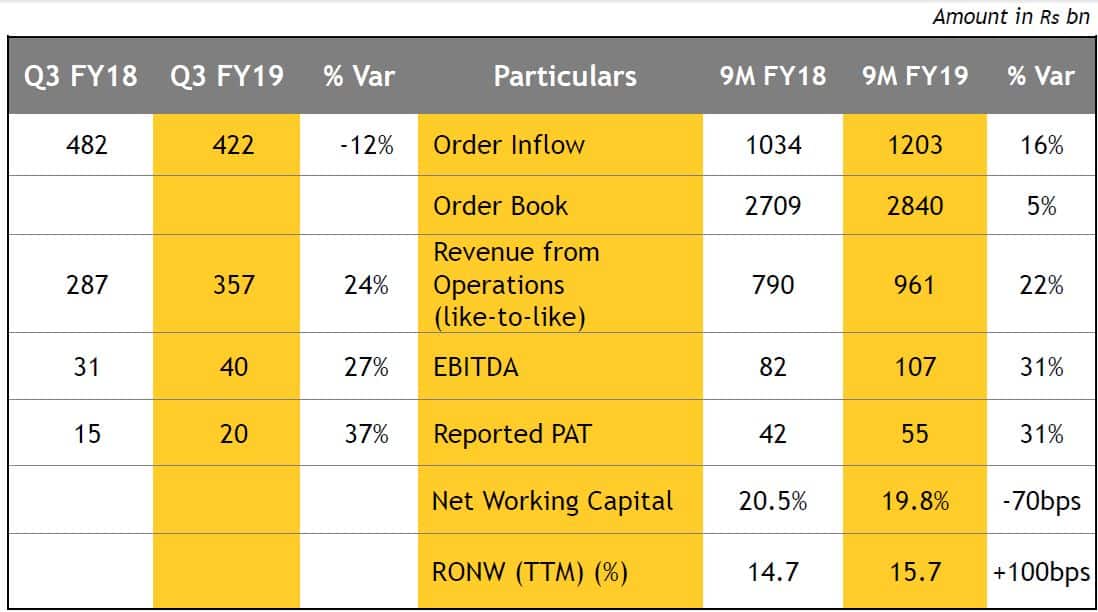 Interestingly, L&T managed to maintain overall operating margins despite margin erosion in the infrastructure segment that accounts for close to 47 percent of consolidated revenue. The consolidated EBITDA margin for the quarter expanded 30 basis points (bps) YoY to 11.2 percent. The infrastructure segment margin dropped 250 bps because of the project mix and cost provision in the transport segment pertaining to the cost overrun claims filed with the clients.

Nevertheless, heavy engineering segments, that accounts for 11 percent of the consolidated revenue, reported a strong 82 percent revenue growth, aiding sales growth and margins. EBITDA margin of the heavy engineering segment that caters to sectors like oil & gas, refineries, fertilisers and others jumped 800 bps to 28.4 percent. The company has been leveraging its engineering capabilities in this segment at a time when the capex cycle is up and the competition is low.

Among other segments that did well, hydrocarbon and defence segments grew 22 percent and 36 percent YoY, respectively. Defence is doing well as a result of some of its projects and programmes such as artillery guns reach the completion. On the other hand, the power segment continues to drag overall performance, as a result of a drop in order inflows and shrinking opportunities in the sector. Management said the excess capacity in the market is causing excessive competition and pressure on margins. Power segment reported one of the lowest operating margins of 2.4 percent.

Ahead of Street expectation

Overall, net profit grew 37 percent YoY to Rs 2,042 crore during the quarter, much higher than the Street estimates of 18-20 percent growth. This signifies is the full year numbers would now look much higher than the expectations of the management and analysts. The company has delivered a 31 percent net profit growth in the first nine months, which--despite slightly lower growth in the March quarter--should be sufficient to surpass the annual net profit growth estimate of about 18-20 percent.
Jitendra Kumar Gupta
TAGS: #(L&T #Business #Companies #Result Analysis
first published: Jan 25, 2019 06:52 pm