While to some it may appear that this is a result of the financial scams involving some of the biggest names in the diamond and jewellery business, the causes go much beyond that

The Indian diamond industry is being forced to change the way in works.

While to some it may appear that this is a result of financial scams involving some of the biggest names in the diamond and jewellery business, the causes go much beyond that. It's true that sharp practices by Indian diamantaires (such as scam accused Nirav Modi) made almost every international bank run shy of advancing money to the trade almost five years ago, but there are other developments that threaten to alter the way the trade works, not only in India, but globally as well.

In 2015, Betterdiamondinitiative.com stated the following:

More than 30 major diamond mines are rapidly reaching their end of life by 2030. Rough diamond production is forecasted to fall by more than 50 percent from current levels by 2030.

The scenario will further aggravate by 2050, when only 14 million carats of global rough diamond production is predicted by Frost & Sullivan. Similar forecasts have been made by Bain, McKinsey and De Beers.


A little over a month ago, Berenberg, in its report titled, 'Diamonds: Icy Winds of Change', dated September 19 announced similar conclusions. It stated that supply is falling and demand rising. “We think the inflection will occur around 2021, but between now and then we forecast a market surplus driven by the emergence of new mines, which are producing lots of low value, small diamonds. Adjusting for this, we think there will be market tightness in 2022. This led to a bifurcated market, with small diamond prices under pressure and large diamonds, where there are better margins for midstream participants, being structurally more attractive.”

More interestingly, both Better Diamond Initiative and Berenberg are in agreement that lab-grown diamonds (also referred to as synthetic diamonds by some) are a disrupter. Berenberg’s survey of around 2,000 millennial women from around the globe showed that while there is still a market for earth-mined diamonds, there was a growing preference for lab-grown diamonds. The reasons for this are many.

First, lab-grown diamonds generally have less flaws than earth-mined diamonds. In markets where flaws are considered inauspicious, the preference for lab-grown diamonds is growing. It is seen to be more friendly to the ecology (it does not scar the earth) and avoids the taint of blood diamonds.

Second, it is almost impossible to tell the difference between earth-mined and lab-grown diamonds.

Third, lab-grown diamonds are less expensive than earth-mined diamonds (sometime by over 30 percent). The market for this type of diamonds, as per the Berenberg report, could swell to $3.7 billion by 2030. That would help fill the vacuum that would otherwise have existed between the market for diamond jewellery and the supply of earth-mined roughs. What is equally interesting is that the price of earth-mined rough diamonds has begun to fall. The rate of price declines could be expected to accelerate.

There are several reasons for this.

Equally significant is the fact that even though De Beers has constantly espoused the cause of earth-mined diamonds – at one time it controlled over 9 percent of the supply of rough diamonds to the world – it too has begun producing lab-grown diamonds. More and more jewellers are beginning to train workers to cut and polish such diamonds.

Meanwhile, reducing demand for earth-mined diamonds and competition of lab-grown diamonds has caused prices of roughs to start falling (see chart below). This is notwithstanding the reduced supply of roughs in the world. People expect these prices to continue falling. Before rough prices started falling, De Beers managed to squeeze cutters and polishers of rough diamonds by constantly increasing the prices of roughs, while prices of polished diamonds remained soft because of market conditions. 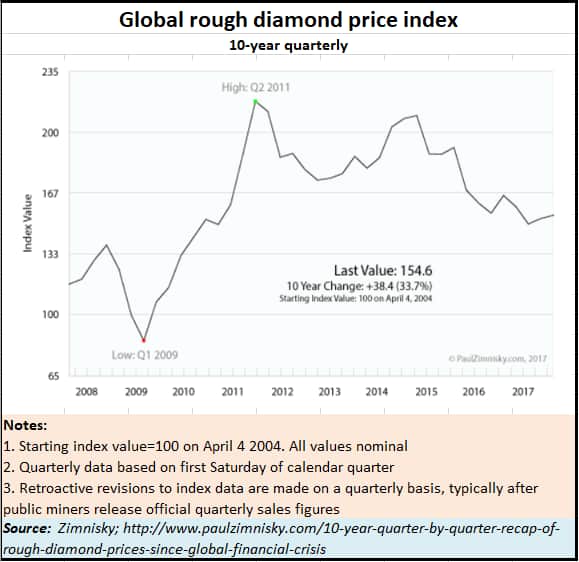 Yet the sparkle in diamond jewellery has only increased. This is because lab-grown diamonds offer a better sparkle. Moreover, the industry has even begun producing large stones. So, expect more developments on this front.

The author is consulting editor with Moneycontrol.com