Fiscal consolidation, policy reforms and higher capital expenditure to support growth are likely to be high on the finance minister’s agenda, says the Chief Investment Officer-Equities.

The reforms industry is rooting for in the Budget range from measures aimed at boosting consumption and capital expenditure to spurring investment and innovation.

Trideep Bhattacharya of Edelweiss Asset Management believes the valuation de-rating of tech stocks is broadly done while earnings estimates are in the process of calibration in sync with the demand scenario in the calendar year 2024.
Hence, Edelweiss AMC has reduced its under-weight position in Indian IT services stocks over last year and turned positive on select stocks, says Bhattacharya in an interview with Moneycontrol.
On the Budget 2023, the Chief Investment Officer-Equities with over two decades of experience in equity investing across Indian and global markets, says investors would focus on three key factors, including fiscal consolidation.

Do you think the government will mainly focus on infrastructure, education and healthcare sectors in Budget 2023 besides continuing the fiscal path while keeping tax rates stable?

Budget 2023 would be special – it would be the last full Budget before the nation goes to the polls in 2024. While historically pre-election Budgets have had populist tones, this was not the case in 2018. It would be fair to assume that the upcoming Budget would be a continuation of recent trends wherein the finance minister Nirmala Sitharaman may maintain a fine balance between fiscal consolidation and reforms, and so would focus on revenue generation and continuation of capex expenditure.
For equity investors, the focus would be on three key factors. First is fiscal consolidation. Whether the government keeps its commitment of bringing down the fiscal deficit to 4.5 percent of gross domestic product (GDP) over the medium term in FY26 would be keenly tracked.
Second, policy reforms to rationalise bottlenecks for growth such as subsidies, a clear roadmap for disinvestment targets and expediting the much-awaited PSU privatisation or consolidation.
Also, the focus would be on sops the FM announces to lift rural demand, deepening PLI schemes towards multiple sectors and keeping the pace of capital expenditure.
Net-net, sectors that are influenced by higher government infrastructure spend, indigenisation of defence, rural spend and the PLI beneficiaries, could see additional measures that could enable faster growth.
Stock-market participants would appreciate a general focus towards fiscal consolidation over the medium term. In the short term, however, nil or minimum tinkering with capital gains taxes on equities would be positive from a stock-market point of view. Such an approach could keep investor sentiment bullish towards domestic equities.

If you want to bet on IT stocks, what would be your preference – large-cap or midcap? Why?

We evaluate the margin of safety from a stock-specific point of view, based on bottom-up drivers over the medium term. From this perspective, we note that the valuation de-rating of tech stocks is broadly done while earnings estimates are in the process of calibration in sync with the demand scenario in CY24.
Hence, while we have reduced our under-weight position in Indian IT services over the last year, we are positive on select stocks where we are comfortable with earnings drivers over the medium term on a selective basis. 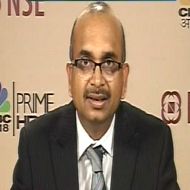 Do you expect the year 2023 to end with healthy double-digit gains for equities?

If I were to look at 2023 and summarise the equity environment, I would probably say that we are likely to face ‘recessionary conditions globally before rebound’ in 2023. In the first three to six months of CY23, we'll see the economic impact of the interest rate increases as the way that several countries have done it. We will see the impact of the same with regard to the growth rates of the companies and the growth rates of the economy. Once we tide through that somewhere around the second quarter of the calendar year, I think broadly global economies will probably bottom out and there can be a nice rebound economically.

Your thoughts on the current corporate earnings season and the management commentaries?

We expect the current result season to reflect strength in credit growth and domestic capex related sectors along with relative weakness in consumption. We expect management commentaries to reflect the macro-uncertainty but confidence in the bottom-up demand scenario going forward.