The bank’s management expects credit growth to pick up after its exit from the Reserve Bank of India’s Prompt Corrective Action (PCA) list.

Raising growth capital is expected to be Central Bank of India’s top priority after its exit on September 20 from the Reserve Bank of India’s stringent Prompt Corrective Action (PCA) framework.

Analysts caution that five years of restrictions clamped on the bank may have put it behind its peers in terms of both business growth and technological upgrades. Raising growth capital will be the top focus of Central Bank’s management after removal from the list, they said.

“The main challenge that we see with Central Bank of India is its loss of market share in both advances and deposits over the last few years as it has been in PCA,” said Karan Gupta, Director at India Ratings and Research.

“Further, as the bank has been under the PCA, advances’ growth has been weak in the last two years. Even now once it has gotten out of PCA and it starts growing again, CET1 (common equity tier-I) of 11.4%, which is lower than peer group average, could become a constraint on growth,” he added.

Central Bank of India was placed on RBI’s PCA list in June 2017 after continued deterioration in its financial performance.

During the last fiscal, Central Bank of India returned to profitability, posting a net profit of Rs 1,045 crore. Even so, its growth and asset quality are below its peer levels. 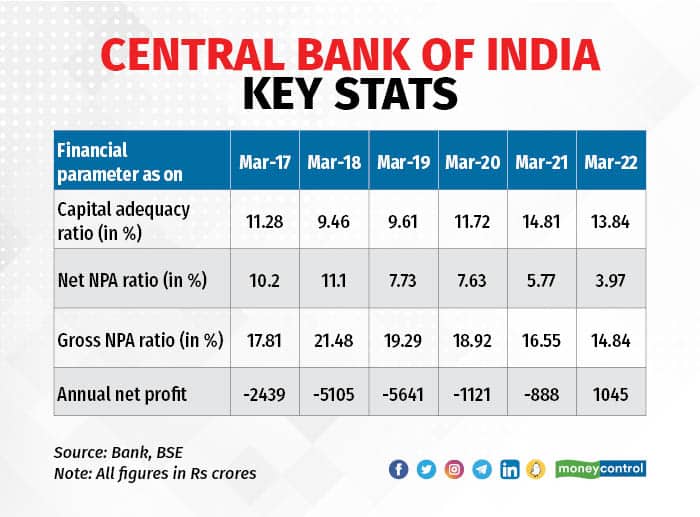 For instance, while the average year-on-year loan growth in the banking sector stands at about 15 per cent, as per RBI data, Central Bank of India’s gross advances grew 11.1 per cent year-on-year in the quarter ended June to reach Rs 1.94 lakh crore.

Credit growth is likely to pick after the removal of bank from the PCA framework, said the management.

“Going forward, when PCA is removed and we may be needing growth capital, we will definitely be exploring a market for these things. But that will be only done only after PCA is lifted,” said Central Bank Executive Director Vivek Wahi said in a post Q2 earnings call.

As of June-end, the bank’s capital adequacy ratio was 13.33 percent.

Further, Central Bank of India’s gross non-performing asset ratio of 14.90 percent and net NPA ratio of 3.93 percent as of June 30 were also higher the metrics of than its peers.

State Bank of India’s  gross and net NPAs stood at 3.91 percent and 1 percent as of June-end. Other PSU banks including Canara Bank and Bank of Baroda also reported single-digit gross NPAs during the quarter ended June.

M.V. Rao, Managing Director and Chief Executive Officer at Central Bank of India, said the lender was expecting some chunky NPA accounts to be overtaken by the newly formed National Asset Reconstruction Co Ltd (NARCL), which will likely result in a lowering of bad loans.

“But still there are issues we have to be sort out. I think it may take some more time,” he said in the analysts’ call.

“Meanwhile, for the next quarter, we are figuring out how we can reduce the gross NPA…most importantly is our net NPA, which was 5.09% in June 2021. Now it is at 3.93%. So, there is a lot of improvement in this. And going forward, we will be sticking to our earlier guidance of 3.5%,” the MD said.

A patient in the ICU

The PCA framework prevents from undertaking certain operations without prior permission from the regulator.

“The prime objective of PCA framework is to enforce supervisory intervention at an appropriate time so as to restore health of the bank,” says Suresh Khatanhar, deputy managing director at IDBI Bank.

“PCA tool is like keeping a patient in ICU for some time so that all vital parameters are checked, monitored so that bank revives to good health. PCA framework is successful, as regulator scrutinises the particular bank at an even deeper level and monitors its performance on specific parameters as per the remedial measures and roadmap drawn,” he said.

While Central Bank has been allowed to exit the RBI’s PCA list, it is still subject to “certain conditions” and continuous monitoring, the regulator said on Tuesday, without giving more details.

Central Bank was among the 13 Indian banks placed under restrictions for deterioration in asset quality. While some lenders were merged with bigger banks, Central Bank was the last to exit the list.

RBI’s PCA norms also affect banks’ profitability as they face restrictions on capital expenditure, other than for technological upgrades within Board approved limits, and face a reduction in variable operating costs.

This has led to Central Bank being left substantially behind its peers even on the technology front.

Central Bank of India, despite having a network of over 100,000 customer touch points across India and over 4,000 branches, ranked 14th in the list of the top Unified Payments Interface (UPI) remitter banks in August, according to National Payments Council of India (NPCI) data.

The bank undertook a total of 113.76 million transactions on its servers in August, but the approval rate of the transactions was among the lowest at all large banks, at 81.96 percent.

The approval rate of UPI transactions depends on two factors—a business decline that occurs on account of customer mistakes like a wrong Personal Identity Number or insufficient funds, and on account of technical declines caused by faulty bank servers.