Adults who love toys? The toy industry loves them, too

A cohort of shoppers like Dykstra—dubbed “kidults” by toy industry insiders—have helped US toy sales surge 37% over two years, to $28.6 billion in 2021, according to data tracker NPD Group.

Chloe Dykstra gave her Razor testimonial for a Kickstarter campaign for its newest scooter.

Chloe Dykstra’s seven Razor scooters have entertained her throughout the pandemic. During lockdown, she also occupied herself building a Lego typewriter. Now she’s eyeing a Sea-Monkeys Aquarium pet hatching kit. Although the toys were designed for kids, that doesn’t bother Dykstra, a 33-year-old writer and producer in Los Angeles. “Sometimes taking care of yourself looks like going back to childhood a little bit,” she says.

A cohort of shoppers like Dykstra—dubbed “kidults” by toy industry insiders—have helped US toy sales surge 37% over two years, to $28.6 billion in 2021, according to data tracker NPD Group. Executives more accustomed to the whims and preferences of children initially thought the spike in purchases of dolls and skateboards were for kids cooped up at home. But a survey last year from the US industry’s Toy Association found that 58% of adult respondents bought toys and games for themselves. 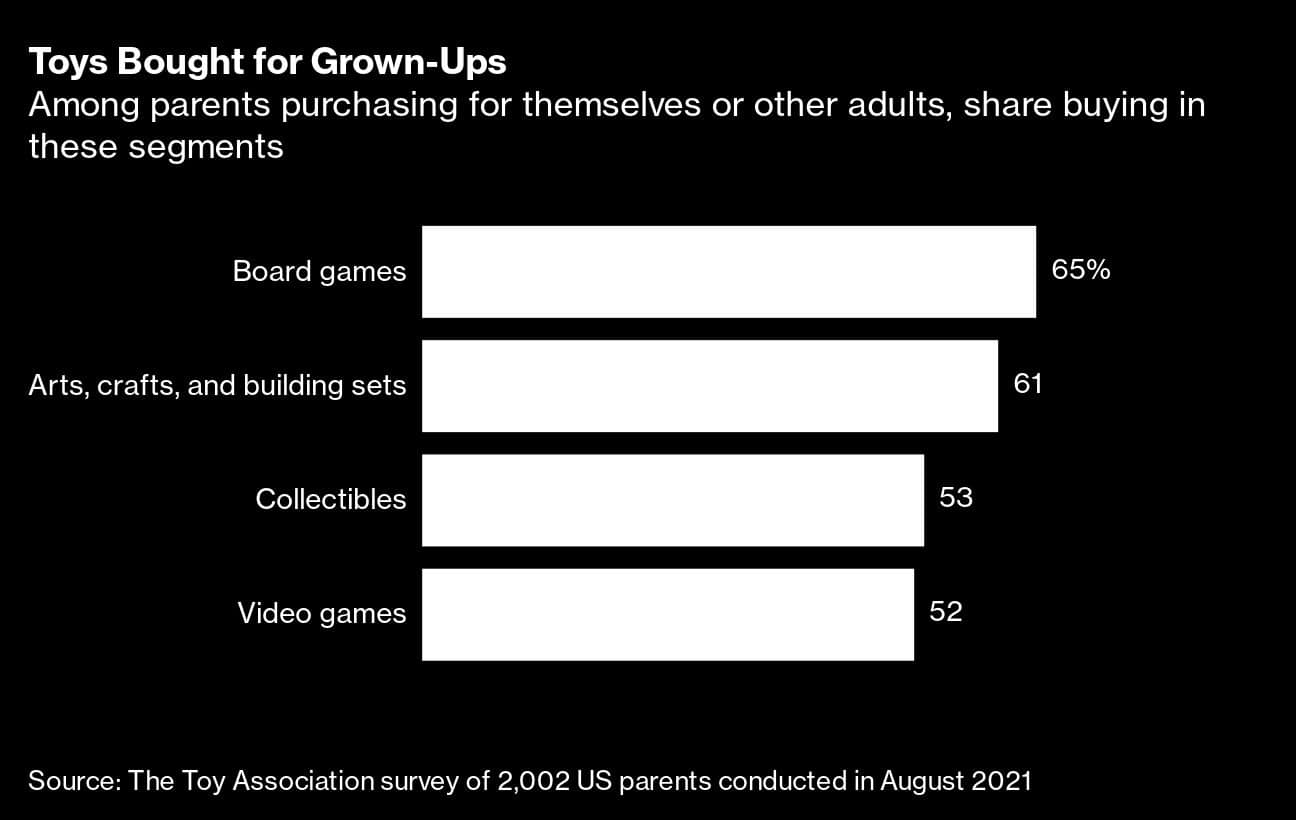 The question was included because members were hearing about grown-ups using toys as a means of escape, says Adrienne Appell, a marketing executive at the trade group. It’s hard to quantify precisely what the trend amounts to in dollars, but industry executives say they’ve seen enough evidence that the segment is growing to roll out new products and marketing just for adults.

As early as September, Razor USA LLC plans to introduce an adult-size electric version of its iconic kids’ scooter, first manufactured in 2000. It will sell for around $600, more than 10 times the lowest-priced child version. “With the kidulting, you’re seeing a continued focus on adults understanding the importance of having time for themselves,” says Jim Wagner, president of Razor USA. Dykstra, who’s been a fan of the scooters since she was a kid, gave her testimonial for Razor’s Kickstarter campaign for the newest scooter after she met the company’s art director on a Zoom birthday party.

In 2020, Lego A/S launched a marketing campaign called “Adults Welcome” and introduced a section on its website for older customers, with such items as a $170 Lego Starry Night painting and a $400 Lego Technic Ferrari Daytona sports car. In February its $50 Botanical Collection Flower Bouquet was named the 2022 Grown-Up Toy of the Year by the Toy Association, a category the group added to its annual product awards starting this year to reflect the trend. It beat rivals including a $100 Hot Wheels remote-controlled Tesla Cybertruck from Mattel Inc. and a $135 Beatles-themed Magna-Tiles set that maker CreateOn says is designed for “fans ages 3-99.”

In September, Basic Fun!, which owns the licenses for retro toys such as Care Bears, will introduce $100 Lite-Brites for grown-ups that can be turned into wall art. The backlit pegboards, into which users insert small, colored pieces to create images, first became popular with kids in the 1960s.

The Toy Association’s survey showed tabletop games were the biggest draw for grown-ups during the pandemic. That rings true for Elan Lee, chief executive officer of Exploding Kittens Inc., whose humorous card game is often enjoyed by adults over a few drinks. Throughout the pandemic, sales of the game have been up at least 20% from pre-pandemic times, Lee says. “It’s really nice to have something to do with friends and family that doesn’t involve electronics,” he says.

A segment of adults has always been drawn to kids’ toys. Grown-ups regularly line up to buy themselves collectible Star Wars figures and Snow White dolls at Walt Disney Co. theme parks and fan events. It might not go both ways, however: The cultural references in some of the new toys intended for adults could be lost on children. Mattel’s $20 Fisher-Price Little People, modeled after characters from Golden Girls, or the $105 Barbie dressed as David Bowie, are products “most kids wouldn’t relate to,” says Jim Silver, CEO of toy review site TTPM. Last month a group including former Disney CEO Bob Iger invested $263 million in Funko Inc., a maker of bobbleheads for adults—a sign of confidence in the segment.

The explosion in sales from grown-ups buying toys for themselves has boosted a sector coping with supply chain snarls, high commodity prices, and wage inflation. “It’s 50-50 whether that continues to grow or whether that is just a pretty standard part of the business now that we cater to,” says Jay Foreman, CEO of Basic Fun! “The good marketers will figure out how to get in front of the hardcore folks.”

Either way, toy executives are optimistic that grown-ups will keep tuning out the sadness of the world with a little childhood fun. “Adults were using play as a way to live through the Covid pandemic,” says Cristina Liquori, Lego’s head of US marketing. “Hopefully that’s a sticky behavior.”
Bloomberg
Tags: #adults #Toys #World News
first published: Jun 21, 2022 02:35 pm