Storyboard18: Passport design: Can the Indian passport be the neighbour’s envy and owner’s pride?

Passports could be a powerful reminder of our roots, our heritage and our symbols of pride. But in the rush to the future, is India losing out on evolving its design language?

(Representational image) The touch, the smell and the overall feel of the passport is so tied to nostalgia. It keeps our foot anchored in our country while we explore the world. (Image: Agus Dietrich/Unsplash)

Though I have been in the design profession for over two decades now, it wasn’t until recently that I started to pay attention to how passports are designed. Two articles I read got me thinking about the design choices countries must make in the process of creating the blueprint of the passports for their citizens.

Belgium has launched a new passport in which the inside pages draw upon iconic characters from comic strips such as Tintin, Willy and Wanda and The Smurfs to create greater standout. Comics have a special place in Belgian culture and are considered the 9th art. The design change is also accompanied with significantly superior technology features that make duplication almost impossible. 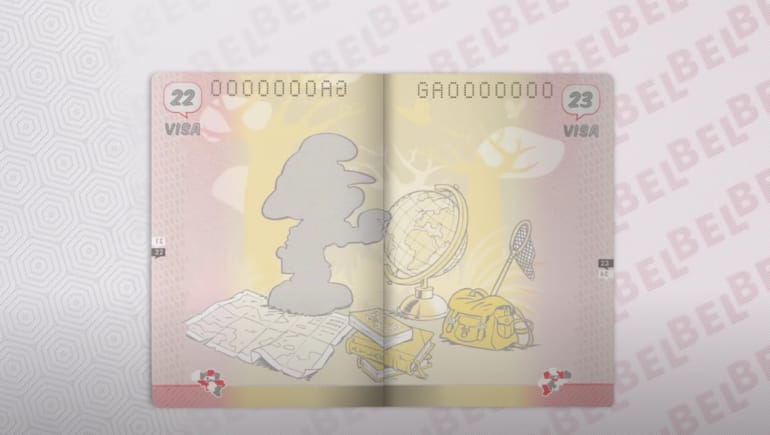 Speaking of futuristic technology, I was impressed and proud to hear the announcement by our Finance Minister, Nirmala Sitharaman, that India will be soon rolling out e-passports with embedded chips.

My Indian passport is one of my most prized possessions. I vividly remember the sheer joy and elation of holding it in my hand after the ordeal of the visit to the Passport Office in Mumbai in the 1990s. My passport represented freedom and global mobility to me, though the design didn’t necessarily reflect that.

The Indian passport is a deep blue colour with gold gilded writing. The cover design is a simple depiction of our national symbol: four Asiatic lions standing back-to-back, a graphical representation of the top of the Ashoka Pillar with the Ashoka chakra clearly visible. The inside pages are rather unimaginative with none of the intricate design details that many other countries choose to have.

Norway, for example, has inside pages that light up under a UV light to reveal the stunning Northern Lights. 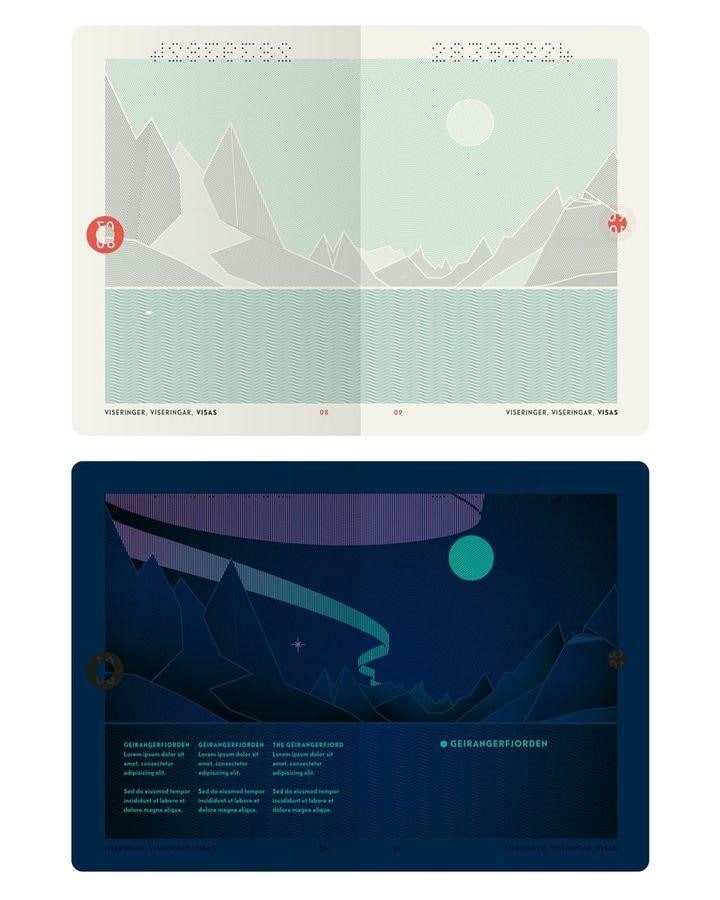 The vibrant inside pages of the Swiss Passport make me want to apply for Swiss citizenship right away!

What about the outside cover? Are they all straightjacketed and simple like India's, or is there a lot of variation? The answer is mostly the former. Rather surprising that a category like passports which has so much inherent potential for differentiation via design is boringly similar for the most part.

All regular passports are one of four colours. Blue is most popular, with 83 countries adopting this colour; 67 countries issue red passports; 42 have adopted green (almost all are Islamic countries); and only 7 are black. (https://www.passportindex.org/byColor.php). I wonder why no country has dared to break this conformity! Bright pink or Very Peri, anyone?

Almost all countries have some short of shield/insignia as the key visual and there is very little deviation from the standard layout.

The one that has extraordinary cover standout to me is the passport that New Zealand issues. It is black, uses silver rather than gold and has a beautiful supergraphic of the silver fern, the national symbol, an important plant for the Māori people. 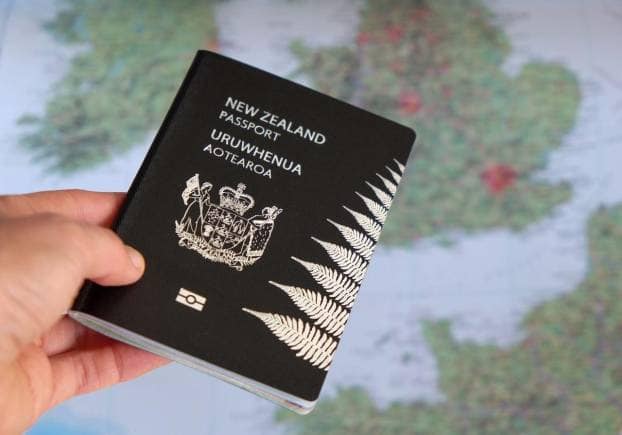 The inside pages are equally gorgeous and have themes of navigation and travel. The idea of owning an attractive passport from another country was cleverly used by an ad agency several years ago. On World’s Ocean Day in 2017, the Plastics Oceans Foundation and LadBible submitted an application to the UN to recognise Trash Isles as an official country. Trash Isles is nothing but a mammoth patch of trash in the Pacific, almost the size of France. This was a hugely innovative way of making the plastic problem visible and engaging audiences from around the world by inviting them to become citizens. The Trash Isles Passport mimics passports in their semiotics but is made from recycled materials, true to the cause it is advocating. 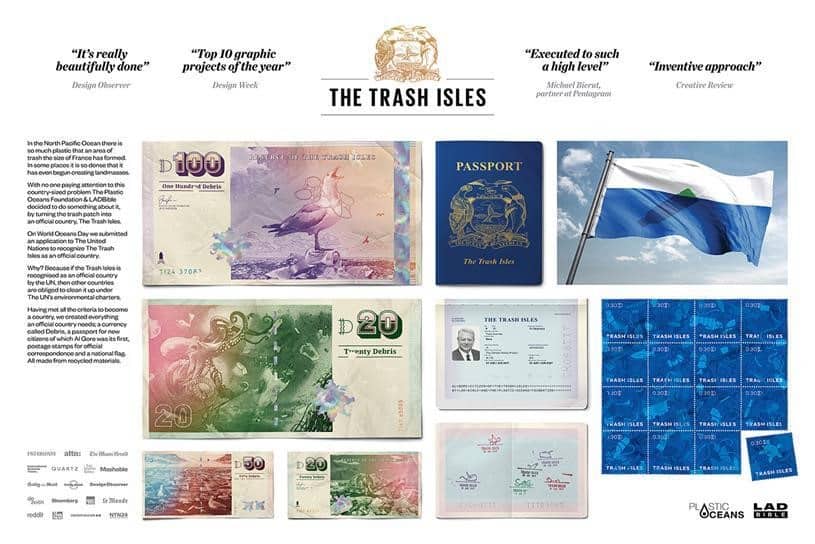 In 2017, the Plastics Oceans Foundation and LadBible submitted an application to the UN to recognise Trash Isles as an official country. (Image source: Campaignlive.com)

The thing about passports is that you don’t get to see them and enjoy their unique designs unless you have a lot of international friends from different countries or consciously study the design stories from online sources.

The one whose beauty you can truly admire and enjoy is your own - unless you have dual citizenship, of course.

I worry that in the rush to be futuristic and tech savvy, India may lose out on evolving the design language. Our passport could be far more aesthetically pleasing, especially when it comes to the selection of artworks for the inside pages.

We are a country with so much rich visual heritage to draw upon. When we were designing T3 in Delhi airport, we developed a graphic language that drew from our cultural symbols of architecture, music and dance to name just a few. Could the inside pages of the Indian passport take similar inspiration? What about the richness of typography we have across so many Indian languages? Or even our varied natural wonders from the Valley of Flowers in Ladakh to Jog Falls in Karnataka - can these iconic landmarks find a way to adorn our pages?

The touch, the smell and the overall feel of the passport is so tied to nostalgia. It keeps our foot anchored in our country while we explore the world. It could be a powerful reminder of our roots, our heritage and our symbols of pride.

Seeing all the recent design innovations by a few countries, India has a great opportunity to redesign our passport to make it “Neighbour’s envy, owner’s pride!”