Upcoming Event:Join us for the exciting discussion with Danone on role of nutrition, protein in working professionals’ quality of life on July 31, 3pm.
you are here: HomeNewsTrendsSports

Nadal’s march to GOATness, with stops in Chennai

Rafael Nadal, the boy loading up on calories at lunch in Chennai in the early 2000s - and then burning them off on the courts, is now at the pinnacle of his sport.

In the early to mid-2000s, Rafael Nadal was a regular at the Chennai Open. An abiding memory is of him doing furious spot sprints outside the press room. He was a teenager then and being spoken of as a potential Grand Slam winner. And the intense frown with which Nadal regards everything from a tennis ball to a question from the press was there even when he was going through a minor pre-match routine.

Only about a year after first prancing about the courts of Chennai, Nadal won the French Open in 2005, beating Roger Federer in the semifinal. He continued coming to Chennai. Another memory is of Nadal, while doing interviews over a meal in the players’ lounge, repeatedly saying “more” to the waiter serving him pasta.

Nadal extended his association with India in 2010, when he set up a centre for underprivileged children in Anantapur, Andhra Pradesh.

The boy loading up on calories at lunch in Chennai and then burning them off on the courts is now at the pinnacle of his sport.

On October 11, Nadal handed Novak Djokovic a drubbing in the French Open final for a record equaling 20th Grand Slam title. He now stands level with Federer in the majors list. Nadal also leads the head-to-head record against Federer. Federer, on his part, has won more career titles overall and has been world no. 1 longer than Nadal.

The matches between Federer and Nadal had an operatic dimension to them, thanks to the contrast offered by Federer’s breathtaking elegance and Nadal’s mindboggling retrieving ability and will. But the man Nadal eventually found harder to beat was Djokovic. This year, Djokovic hadn’t lost a single match. Every one therefore expected a bruising, Game of Thrones finale kind of a battle in Paris. 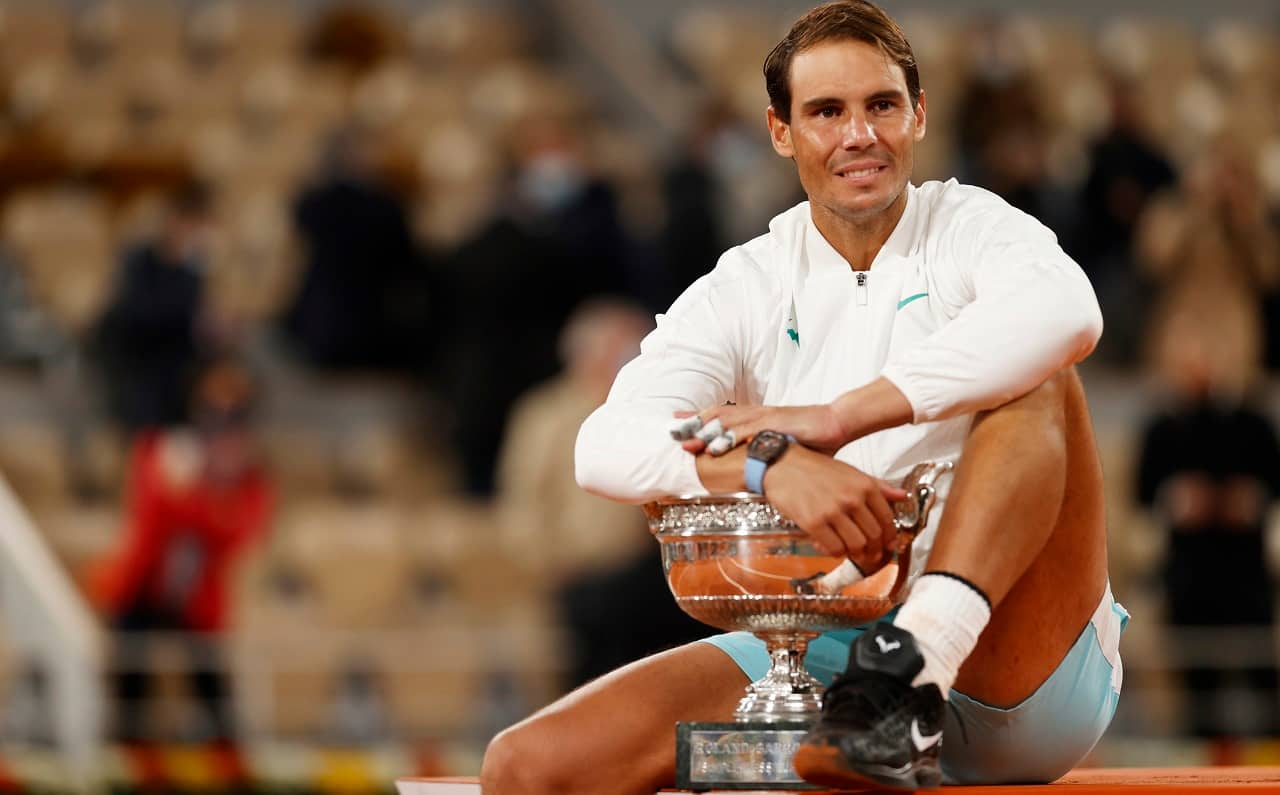 But like so many times he has done in his career, Nadal saved his best for the crunch. He made just 14 unforced errors, broke serve seven times and himself got broken only once, though Djokovic is one of the best returners of serve in the game.

In addition, Nadal mixed up his game and moved well. Often, during fast rallies, Nadal threw in a looping moonball, slowing the exchange, throwing Djokovic’s timing off. Characteristically, Nadal also dug out the heavy shelling from Djokovic to his forehand with a deceptively simple lunge of the left leg and a flick of the wrist.

It sent the ball back high and deep to Djokovic’s backhand. Nadal is the king of Hail Marys, because they are precise, deep and topspun Hail Marys that pull him out of trouble and drive his opponents insane with the thought. “How do I get the ball past this man?”

To make matters worse, Djokovic was below par. He made 52 unforced errors and won only 50 per cent of the points on his first serve. He also showed poor shot selection. On the verge of closing out the first game, he went for a cheeky drop shot and lob combo which flopped, and ultimately cost him the game. What should have been 1-0 and a strong start ended up becoming 0-1 and a shaky start. These are small steps but important ones in the larger context of a match. Nadal, as nervous as Djokovic initially, got an unexpected gift from a usually uncompromising opponent.

What followed was one of the most unexpected scorelines in the history of sport. Nadal won the first set 6-0. He had handed a bagel to the mighty - and gluten intolerant – Djokovic.

Also Read: Petra Kvitova and the art of not playing victim

Djokovic will think hard about that first game, as well as his excessive use of the drop shot. Nadal was wise to that trick far too often.

Set two was not much better for Djokovic. Finally, in the third, he woke up, roaring after drawing level at 3-3. But it was too late. On the last point, Nadal hit an ace and kneeled on the Roland Garros clay. He was not running anymore. He was not frowning either. He was beaming. Trailing Federer all these years in perception and the Grand Slam tally, he was now on par with him as the greatest of all time.
Akshay Sawai
Tags: #Rafael Nadal #Sports #Tennis
first published: Oct 12, 2020 09:52 am