Considered uber-cool during the 1920s—a decade that saw the rise of Art Deco architecture and design as well as flapper fashion—the jump hour movement, revived by Genta in 1996, is at the fulcrum of the Indian horology brand’s minimal new collection. Not many in India may have heard of Gerald Genta, considered a master watch designer in the world of luxury horology. The late Swiss designer was the creative force credited for the most significant watches ever made: Omega’s Constellation (a design he infused with a fresh perspective); Patek Philippe's Nautilus; Audemars Piguet’s Royal Oak; Bulgari-Bulgari, a watch that is rooted in the aesthetics and beauty of ancient Roman coins and became an emblem for Bulgari; besides several more.

Almost five years ago, Gaurav Mehta, Founder and CEO of ‘Made in India’ brand, Jaipur Watch Company, conceived a timepiece that pays lush homage to Genta’s genius. He launched the dream watch amidst a global pandemic. “The Jump Hour watches first caught everyone’s fancy in the 1920s, the years of the Art Deco movement. It, however, dates way back to the 18th century. The vintage jump hour movement was also popular in the pocket watches of the 1930s.” Gaurav Mehta, Founder and CEO of ‘Made in India’ brand, Jaipur Watch Company

It was in 1996 that Genta, under his eponymous label, first combined the retrograde minutes and a jumping hour counter in a watch. Bulgari acquired the original Gérald Genta firm and all its associated designs, patents, and trademarks in 2000.

Back to JWC’s limited edition watch, then. Part of the Harmony Collection, the Jump Hour Watch is an idiosyncratic timepiece that has an ‘hour window’ instead of an ‘hour hand’. “Unlike traditional watches in which the hour hand sweeps the dial, this watch has a disc behind a tiny window on the dial that ‘jumps’ to indicate the hour accurately when the minute hand touches 12 (60 minutes),” says Mehta. Every 60 minutes, the minute hand snaps back to zero as the hour counter rolls over. It took him over three years to develop the grand complication. “We had launched a similar disc model a few years ago, but the hour did not hold its position. Now we have a simple window that shows the hour as it ticks. And it holds the position till the minute comes to 12 o clock before it jumps to the next hour.”

Only 100 editions of the Jump Hour Watch, with a price tag of Rs 50,000 each, have been made and already, 52 have sold. The minimal 40mm and 46mm thick royal blue watches have an enamelled blue dial. Mehta says, “We believed that since 46mm is large, we would sell more of the 40mm. We sold almost 29 of the bigger watches, surprisingly.” The stainless steel watch, kitted out with a chrome finish and an embossed back, has a sleek design with curved edges and lugs that are signature to JWC. The first non-coin watch in the Harmony Collection, its bezel is inspired by a coin’s edge, a subtle way of referencing the brand’s passion for embellishing the dials of its prêt watch collections with vintage, colonial-era coins.

The hour window is placed right at the top of the enamelled blue dial. It has one long hand that sweeps the dial indicating the minutes and a sub-dial displaying a tiny second hand. The power reserve lasts for 42 hours. Part of the complexity of creating a jump hour movement is the regulation of power transferred to the hour disc. 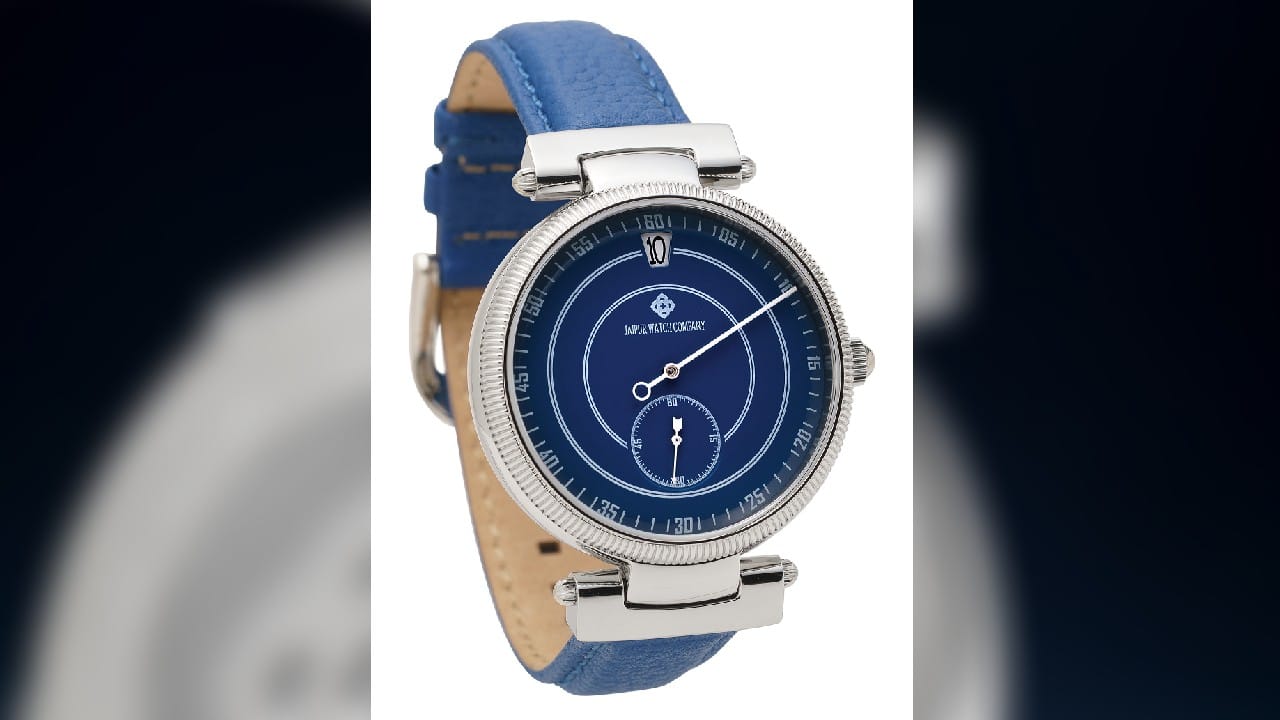 Launching a watch amidst a pandemic

Mehta recalls how everyone ‘wisely’ advised him against launching a watch amid a pandemic and economic disruption, especially one to which he was emotionally attached. “These are challenging times for all luxury brands. I introduced teasers on social media almost a month before the actual launch. I interacted with all my clients. To my surprise, six to seven of my clients booked the watch without even seeing it.” 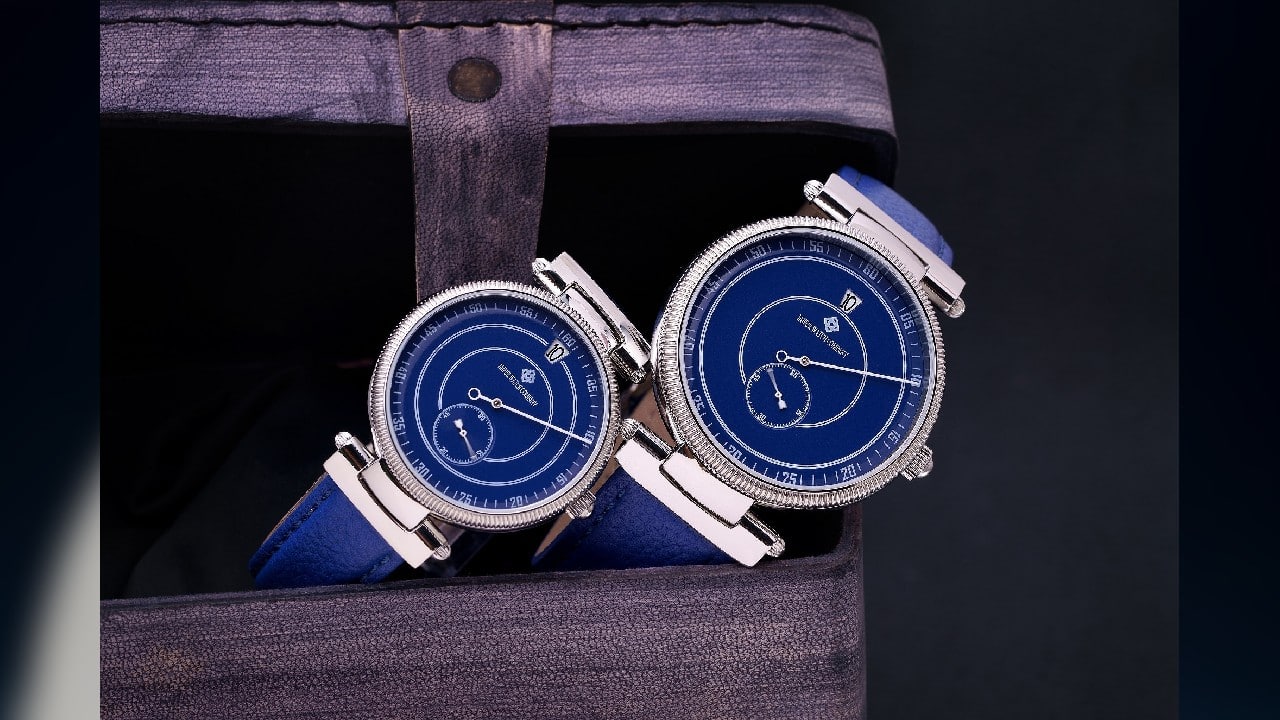 Since then, JWC has sold the watch not just to Indians in India but even to People of Indian origin in the US and Britain through Mehta’s network, the brand website, the store-in-store outpost within Taj Khazana in The Taj Palace, Delhi and through Tata Clique’s Indiluxe e-commerce platform.

Once a digital-shy brand (Mehta believes in traditional modes of selling and marketing), the pandemic and its disruptions have caused a cataclysmic shift in thought and attitude. “The world is now heavily skewed towards digital platforms for consuming media, information, for shopping and much more. We have had no choice but to play catch-up. There is a major game shift.” The focus on digital and social media marketing has paid rich dividends as JWC garners clients from B and C cities, which were not on their radar. The success of the Jump Hour Watch encouraged Mehta to launch another, the exquisite Filigree watch, handmade by artisans in Jaipur, about which we wrote in our Diwali gifting guide. “While the prêt and the lower end of the bespoke business—the Rs 70,000 to Rs 1 lakh bracket that involves modifying certain features as per client preferences—are picking up, the top-end segment is struggling because of the high gold prices. A watch that cost Rs 2.5 lakh a few months ago, now costs Rs 3.5 lakh due to steep gold prices.”