Exhibitions in 100 Indian cities, art school scholarships and a major show at Pompidou Centre in Paris to mark birth centenary celebrations of the master artist

Artist S.H. Raza's birth centenary celebrations will be held during 2021-22 in India and France. Raza lived in Paris for six decades.

Somewhere in the beginning of Yashodhara Dalmia's new book on artist S.H. Raza is an anecdote about a group exhibition in Mumbai in the 1950s. At the Gallery 59, Raza's work was priced at Rs 1,000 while his friend M.F. Husain's at Rs 500.

"Husain reacted negatively at this and walked out of the gallery. He returned the next day with three paintings that resembled Raza's work but were priced at five rupees each," writes art historian Dalmia in Sayed Haider Raza: The Journey of an Iconic Artist.

"This immediately thawed the ice and when the group (of artists) came together in the evening, Husain composed a verse: 'Aaj kya ho gaya, paisa khota ho gaya, mamala ulta ho gaya (Look what happened today, money has become worthless, everything has turned upside down).'"

Dalmia's new book is part of the celebrations to mark the centenary of Raza's birth this year. There are more than half a dozen books, including one for children and a Raza reader, scheduled to be released during the centenary year, along with a multi-art festival in six Indian cities, awards to young artists, a film, poetry readings, a major show at the famous Centre Pompidou in Paris and scholarships to art school students.

"Celebrations at this scale and size have never been organised for an Indian artist before," says poet Ashok Vajpeyi, Managing Trustee of the Raza Foundation, set up in 2001 by Raza to promote arts, culture and ideas in the country. "Very few artists have the stature that Raza achieved, although there are some like Husain, (V.S.) Gaitonde, (F.N.) Souza and Akbar Padamsee," he adds. "This country is not used to celebrating its great figures in culture in a great way."

Born on February 22, 1922 in one of the nine hutments in a tribal forest village in Mandla, Madhya Pradesh, Raza symbolises the Indian dream of rising from humble origins. He studied in a government school located on the fringes of the Kanha National Park before going to Nagpur to learn drawing and earning a scholarship to the prestigious Sir JJ School of Arts in Mumbai.

“At the age of 10-12, I sketched the Narmada river in Mandla,” Raza wrote in Passion: Life and Art of Raza, an autobiographical work he co-authored with Vajpeyi before his death at the age of 94 on July 23, 2016. The bindu, the leitmotif in Raza's works, was introduced to the young school student by his village school headmaster.

Worried about the wandering nature of his student, Nand Lal Jharia, the headmaster, summoned Raza 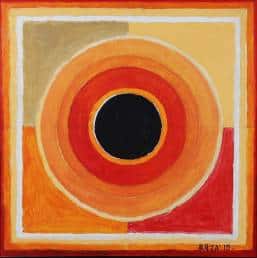 'Saprem', S.H. Raza's work with the bindu, the leitmotif in the artist's works.

one day. “Forget about study, forget about play. Forget about anything that I or someone else might have told you. Just concentrate on this dot,” the headmaster told the boy, pointing to a dot he had drawn on a piece of paper. The dot went on to follow him for the rest of his life, becoming an integral part of his works.

Practising art in Mumbai during the turbulent period of the Partition, Raza chose to stay in India while his family moved to Pakistan. "Raza believed in India, the India of Mahatma Gandhi. His stance both as an artist and a human being is so deeply Indian in times when the Indianness is narrowed down to become a majoritarianism norm," says Vajpeyi. 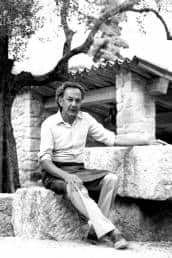 Raza in his native town of Mandla, Madhya Pradesh.

Raza retained his Indian citizenship though he lived in France for 60 years, after leaving on an art scholarship to Paris in 1950. Before he left, Raza had become a founding member of the Progressive Artists' Group with Husain, Gaitonde, Tyeb Mehta, Padamsee, Krishen Khanna, Ram Kumar and Souza.

"Raza always missed his life in Mumbai," says Bose Krishnamachari, artist and president of Kochi Biennale Foundation (KBF). "Whenever he came to Mumbai from France, I used to show him around the city," he recalls. "The KBF will organise an exhibition of his works in Kerala to honour his life and works," adds Krishnamachari, a JJ School alumnus.

"Raza's use of text, especially Sanskrit text, in abstract paintings is very important. No artist has ever used that before Raza," says Krishnamachari, who admires his enthusiasm in encouraging young artists and helping fellow artists. "He was concerned about other artists. Padamsee was also like that," he adds. (L to R) Art historian and author Yashodhara Dalmia, ambassador of France to India Emmanuel Lenain and poet and Raza Foundation managing trustee Ashok Vajpeyi at the release of 'Sayed Haider Raza: The Journey of an Iconic Artist'.

"Raza is the best example of what crossing lands can produce for culture," says Emmanuel Lenain, the ambassador of France to India, who opened the doors of his residence for the release of Dalmia's book on the artist last month. France will pay tribute to Raza with a major show of his works at Centre Pompidou in Paris from June 9 to August 22. More than 100 works, including 65 from Indian collectors, both private and public, and the rest of Europe will be part of the show.

Art lovers across the country will get the opportunity to see the artist's authorised prints in a travelling exhibition in 100 cities. A separate multi-art festival in Gwalior, Kolkata, Jaipur, Bhopal, Delhi and Mumbai featuring some of the young artists who have received the Raza Foundation awards is another highlight of the centenary celebrations.

Raza always said France taught him how to paint, but what to paint he learned in India.
- Ashok Vajpeyi, poet and managing trustee of The Raza Foundation

The screening of a film on Raza, a festival of poetry, discussions on Raza's vision and a specially choreographed event inspired by the artist's works are also planned. The choreographed events will witness the participation of famous classical dancers like Bharatanatyam exponent Malavika Sarukkai, Manipuri dance exponent Priti Patel, Mohiniyattam dancer Gopika Varma and Odissi dancer Sujata Mohapatra.

The centenary celebrations, organised by the Raza Foundation in collaboration with several other institutions like the Chhatrapati Shivaji Maharaj Vastu Sangrahalaya, Mumbai, Kolkata Centre for Creativity and Atal Bihari Vajpayee Indian Institute of Information Technology and Management, Gwalior, will also see new scholarships in art schools during the next academic year.