Behind the scenes: The rakhi makers of India

The manufacturing units are mostly dominated by women who start collecting raw materials to make rakhis in December; production gathers pace after April.

Shree Rakhi in Kolkata. From Kalna in West Bengal to Jaipur in Rajasthan, rakhi making generates income for thousands of women across the country.

It’s a hectic day at the office of Shree Rakhi in Kolkata. There are boxes everywhere, as women put finishing touches on rakhis. Crystals, stones and beads lay scattered along with colourful zari threads that will soon be crafted into shimmering rakhis.

Raksha Bandhan is the busiest time for Shree Rakhi, one of the largest manufacturer of rakhis in India. The seasonal business gets heightened as crores of rakhis make their way from the narrow lanes of Kolkata to the sparkly gift shops and kiosks of India. A rakhi and a Lumba rakhi by Shree Krishna Rakhi.

Rakhi to the rescue

The 60-plus-year-old rakhi business was started by Pushi Devi Mohta in 1962 in Kolkata. “My grandmother started making rakhis to supplement her husband Murli Dharji Mohta’s income who was working as a clerk in an accounting firm in Kolkata. Initially she started with simple resham rakhis as Kolkata was known for its resham threads. Then she added decorative elements which made the rakhis very popular with neighbours and people in the vicinity. But the business shut two years later after her death. It was revived by my uncle Jiwan Das Mohta,” explains Kamal Soni, third generation of this legacy rakhi brand.

With rising demand and design interventions, Shree Rakhi expanded the rakhi business to include more women in the manufacturing process. “Rakhis became a way to celebrate milestones and major achievements in the country. The postman rakhi, rupaya rakhi, Rakesh Sharma rakhi (when the Indian Air Force pilot landed in space) in the '80s and even Cadbury rakhi were some of the memorable rakhis launched by us,” says Soni, who claims to sell around 2.5 crore rakhis annually. Exports to countries like the US, UK, Fiji, Mauritius and Australia add to the numbers.

Kalna in West Bengal is known as the rakhi hub in India. There are at least three big and 20 small clusters associated with making rakhis and supplying those in Bengal and outside. The demand for rakhis shot up after the Mamata Banerjee government started observing the festival to celebrate brotherhood cutting across religious lines. The state government itself has been placing orders for over six lakhs rakhis every year.

The manufacturing units are mostly dominated by young women who start collecting raw materials to manufacture rakhis in December, and the production gathers pace after April. For the rest of the year, many of them are engaged in making wristbands and junk jewellery. 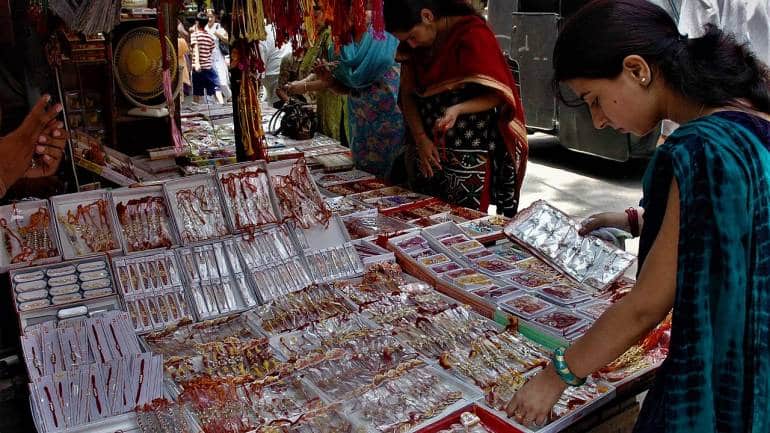 Howrah is another area which houses artisans of the rakhi making community. The industry being largely scattered and unorganised, it also has many middlemen from the closest business hub of Burrabazar. West Bengal Khadi and Village Industries Board (WBKVIB) is in fact working towards seeking the GI tag for rakhis made in Kalna in East Burdwan.

Jaipur in Rajasthan is another prominent rakhi making region in India. The tradition of ‘lumba’ rakhi, which is a rakhi tied between sisters-in-law, originated in Rajasthan.

“Lumba in the Marwari language roughly translates as ‘bangle.’ On Rakshabandhan, it is customary for a sister to not just tie rakhi on her brother’s wrist but also her sister-in-law’s. The trend is now followed by many North Indian families as well. The Lumba rakhi tied to the bangle of the sister-in-law or bhabhi dangles like a pendant, creating an impression of kalire which is worn by Punjabi brides,” says Simran Maheswari a jewellery designer from Jaipur.

When it comes to rakhi designs, jewellery trends plays a huge role. “Beaded, stone encrusted and Kundan rakhis do very well. Right now, the American Diamond series of rakhis are flying off the shelf,” says Soni.

The most sought after rakhis include the one with famous cartoon characters like Pokemon and Chota Bheem. Kids love these rakhis festooned with lights and sound. Rakhis made with seeds, flowers and even rice have been rising up the popularity charts in the last couple of years. Indibni a Jaipur-based design company has been making seed rakhis with the help of artisans from women's self-help groups (SHGs) and Ficci Ladies Organisation (FLO).

“Every year 620 million non-biodegradable rakhis are dumped in waste, generating 1.18 billion tons of carbon footprint. It took us two years of intense research and hard work to bring seed rakhi into existence,” says Nitin Jain, one of the co-founders of the start-up Indibni.

Unlike regular rakhis that are embedded with plastic, stones, glitter and non-degradable waste which then ends up polluting the environment, these rakhis are crafted from seeds of sunflower, amaltas, papaya, rice and basil, which can be planted once the festival is over. Rakhis made from water hyacinth are also making waves in West Bengal's Nadia district. Over 400 pieces of such rakhis have been made by women trained by craftsman Debasish Biswas. Water hyacinth plants with stems of at least 2.5-feet length are washed, leaves separated and dried. The fibres inside the stems are then cut out for making the rakhis.

“The craft of Bastar was dying. We wanted to revive this craft and earn respect and living for the artisans of Bastar. Making rakhis out of bamboo, which is found in bulk here, has served that purpose,” says Mohit Arya, founder, Arya Prerna Samiti, a non-profit working for sustainable livelihood of tribal people in Chhattisgarh.

It is not easy work. Women have to painstakingly separate fine threads from raw bamboo before drying and knotting stones onto them.