The gems and jewellery segment in India may be facing losses of Rs 75,000 crore, but affluent Indians have found a new obsession: online jewellery auction of rare and collectable pieces with pedigree and provenance.

In May, bang in the middle of a pandemic, Cartier’s Tutti Frutti — an Art Deco masterpiece which epitomises a classic synergy between Indian royalty and the French watch and haute joaillerie house — sold for a staggering $1.34 million, far beyond its reserve price between $600,000 and $800,000.

Despite the pandemic and the global economic crisis that presumably has set in, for the esoteric world of online auctions (or even traditional auctions), this was a new high. Auctioned by Sotheby’s, it is the highest price achieved for any jewel sold at auction in 2020 by any house. The auction house’s jewellery maestro Frank Everett says Cartier’s tutti frutti collection is considered a holy grail of all jewels, given its close linkages to India’s royalty and its jewellery heritage.

“In 1911, the founder Pierre Cartier’s brother, Jacques Cartier, set off on his first voyage to India. His travels further influenced the development of tutti frutti jewellery (with coloured gemstones, unlike diamond-studded jewels that were popular, till then) when the master jeweller returned to Paris. Impressed by the bright colours and traditionally carved cabochons used in local designs, he sought to also incorporate those elements into his pieces. The subsequent designs pay homage to Mughal decorative art.” This particular piece was commissioned by Queen Alexandra to wear with her three Indian gowns, gifted to her by Mary Curzon, the wife of the Viceroy of India at the time.

Social-distancing mandates have put an abrupt halt to auction houses and forced them to transition to online sales. Instead of affecting sales, more people are seemingly parking their money in investment-worthy jewellery in online auctions. Over four sales throughout March and April, Sotheby’s had estimated that it would bring in, at the most, $5.7 million. But the auction house ended up bringing in $6.1 million. In the high-energy world of global auctions, not just Indian jewels with provenance, but even Indian buyers are of immense importance at the moment. An insider at Sotheby’s requesting anonymity (client privacy is sacrosanct unless they’re open about a pubic revelation) says, “Jewels with Indian pedigree have always done extremely well because of their provenance, their link to royalty, their beauty and finesse, and the brilliant use of stones such as rubies and emeralds. Now, Indians themselves are decent-sized participants in the auctions, particularly over the last four months.”

Not that there were no online auctions before, but the industry believes it has seen a major shift in the way the affluent world will buy their jewellery: far more online, far more pedigreed antique jewels, more collectables that can be cherished by generations and are a serious investment, instead of new-age pieces with very little heritage.

Rahul Kadakia, international head of jewellery at Christie’s, is excited about the possibility that has opened up. “The spectacular 28.86 carat D colour diamond was the highest valued lot ever offered in a Christie’s online sale and was competed for by many clients from four continents, spanning America to Asia. It received 31 bids. The stone possesses transparency and purity of colour, which can only be found in the world’s finest natural diamonds.” The entire sale totalled $4,164,500, with 93 percent sold by lot, 100 percent sold by value, and 64 percent of lots selling above their high estimate. Bidders represented 27 countries and five continents. The auction saw a 70 percent increase in unique visitors when compared to the online sale hosted in June 2019.

Such high-yielding sales far beyond the reserve price have rarely been seen by auction houses, particularly online, and come in the face of the abysmal losses that the jewellery industry is facing globally. Kadakia reveals, “Since lockdown on March 18, all our sales have been conducted online – a radical move but the only possibility to continue our business. A total of 83 online sales took place in the first five months of the year, as many as the firm conducted in total in 2019. The jewellery online sales concluded with a combined sell-through rate of 91 percent. Clients from 80 countries have participated in online sales, with 35 percent of buyers new to Christie.”

Neither of the auction houses is letting us in on who ultimately bought these two pieces, but both have seen higher participation and buying by Indians. As Kadakia has said, “Indians know a thing or two about buying jewellery. Indians, with their history of buying jewellery, art, architecture have it in their DNA to be collectors, to be educated connoisseurs of every area of the art market.” 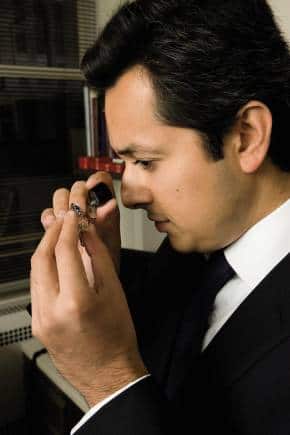 Rahul Kadakia checks the quality of a diamond.

One of the biggest contemporary names in the multi-billion dollar global auction world is an Indian: Mumbai-based jewellery Viren Bhagat. Unfortunately, very few pieces by Bhagat are coming to the auction market and when they do, the pieces tend to sell far above pre-sale estimate.

Kadakia, who comes from a family of Mumbai jewellers, mentions a beautiful diamond brooch designed by Bhagat that Cartier offered for $40,000-60,000 in their legendary ‘Maharajas & Mughal Magnificence’ auction last year in New York, where it sold for $212,500. Bhagat is much in demand for the unmistakable style in which he threads old gems and natural pearls in an east-meets-west design.

The answer as to why more people are buying at auctions online could lie in the fact that these are collectible jewels, seen as investments by Indians, and there are more Indians looking for investments beyond real estate, as a Knight Frank Wealth Report 2020 points out.

The prices in the recent sales are also designed to be inviting and which Indian does not like a bargain, however affluent. Catharine Becket, Senior Vice President and head of Sotheby’s Magnificent Jewelry division says, “In decades of collections we know that conservative pricing yields the higher price and attracts more bidders.” She added that 30 percent of the bidders at the auction were age 40 or under and a comparable percent were new to Sotheby’s.

How do online auctions function?

In the regular world, executives and top stars of the auction houses jet-set across the world, armed with the star jewels going up for auction, previewing them in private audience or at glamorous evening showcases within luxury hotels. Now, it is all about online viewing rooms run using cutting-edge technology, with the right-to-entry reserved. The auction houses, of course, are coasting on their past reputation to ensure sales given that physical examination of the jewels is not possible. 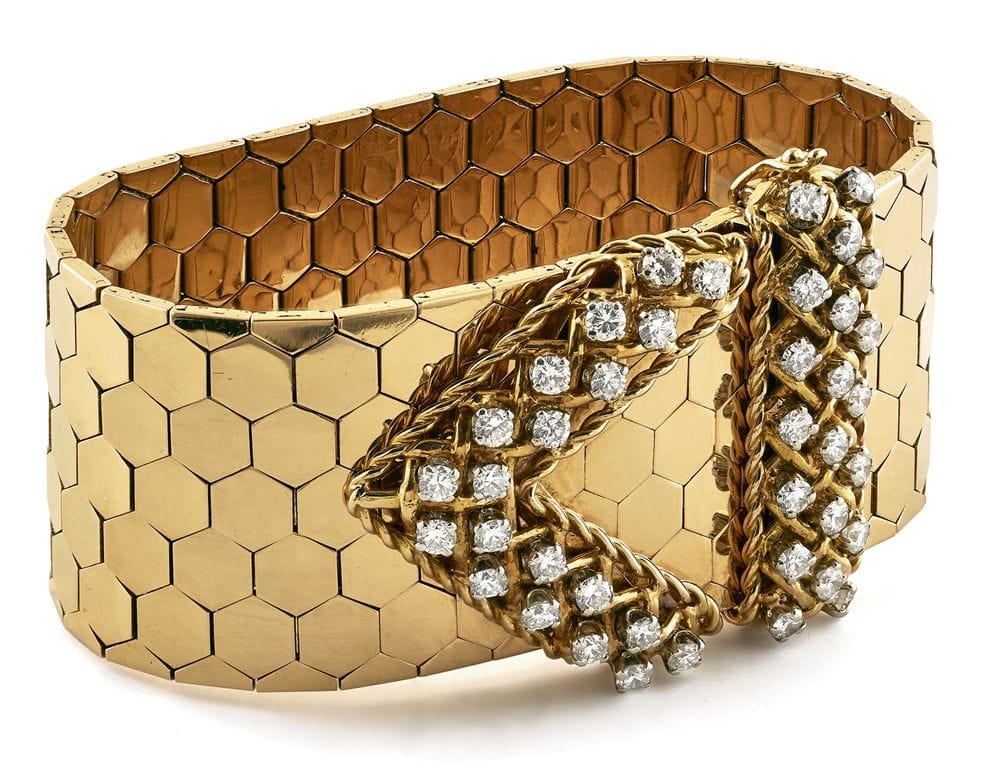 A gold and diamond retro bracelet.

The fact that Indians are ready to buy online speaks of a shift in mindset, according to jewellery historian Usha R Balakrishnan. “For centuries, we have been told that we need to look at the jewels, touch them, even those with serious provenance, before we buy. That now we are ready to put serious money into buying jewellery online, speaks of our shift in mindset. Online auctions and retail will become a larger part of our lives.” This is where certifying labs will come in: a certificate from a renowned lab is worth its weight in gold, or diamond and gemstones in this case.

Interestingly, the country has its own home-grown auction infrastructure, nurtured by auction houses such as SaffronArt and AstaGuru.

AstaGuru has reported some interesting sales in the recent past: An 18k gold and diamond retro bracelet, estimated between Rs 6.5 lakh and Rs 7.5lakh, which sold for Rs 9.25 lakh. A set of miniature paintings, rock crystal, turquoise, natural pearl and gold ceremonial necklace, with a Jaipur provenance, sold for Rs 16.44 lakh against an estimate price of Rs 12 to 15 lakh. The stunning neckpiece is a canvas for 61 miniature paintings, with the primary ones mounted on octagon panels with turquoise drops. But what set new benchmarks is a two-strand emerald necklace, with 42 emeralds brushing against each other in two strands, which recently auctioned for Rs 1,64,22,000.

Jay Sagar, Specialist – Jewellery, of AstaGuru, says, “India has a huge potential to grow as a jewellery auction hub. We have merely uncovered the tip of the iceberg. We are at a nascent stage when we compare to the western auction market, but the scope for development is immense.” Since 2017, AstaGuru has been conducting standalone auctions for the segment against its earlier decision to bundle it with its collectibles portfolio. Over the lockdown, Sagar contends that the Indian jewellery auction market has maintained its stability. The most amount of traction has come from the metropolitan cities. “The demand for vintage jewellery has not witnessed a decline. From our understanding, the segment that has been affected the most is the new jewellery segment since it is mass retail in nature.”

This uptick doesn’t mean that Indians will stop buying their jewellery from that family jeweller or their favourite Indian brands. It just means that the jewellery auction market will see far more Indian participation as it evolves. Antique, collectable jewellery has the potential of not just becoming an investment segment for India, but we are more likely to wear those jewels instead of leaving them locked away, which seemingly most of the world does.