Upcoming Webinar:'COLLECTIVE FORCE: India Inc. unites to tackle the second wave of COVID-19' on June 23, 11 am. Register Now!
you are here: HomeNewsTrendsFeatures

Burn out is a stressor with no known time limit. It consumes your internal resources to the point of depletion. Its effects are lasting because it has eaten into your reserves. And work isn’t its only source.

Think of yourself as a wrestler up against a worthy opponent. Your aim is to dislodge his balance without disrupting your own. You play a mental and physical game simultaneously. You mind your footwork, keep up stamina

and agility, but also map your opponent’s concentration, movements, and weaknesses. He does the same to you. It’s an invigorating round that lasts an hour. You’re fatigued but will collect a sweet cash prize at the end and go home. Now imagine playing multiple opponents. Now imagine the prize is survival. Now imagine there is no hour to the round, it extends indefinitely. There is no home to return to when the fight is done, that’s the venue.

The result is what you are feeling now: burn out.

Burn out is an extended stressor with no known time limit. It consumes your internal resources to the point of depletion. Its effects are long lasting because it has eaten into your reserves. Work isn’t the only source.

Caregivers of terminally or chronically ill patients, overwhelmed women who look after extended families experience it too. Even bosses who inflict it on subordinates have it inflicted on them by their superiors. Stress can be invigorating for brief periods. In a fight of a fixed duration, it can pump you up. It can be a motivator in the right proportion. When it’s relentless, it has the opposite effect: the fight is rigged against you.

We are a year into a uniquely hostile environment which primes us for anxiety. The atmosphere is fearful, jobs are scarce, expenses are high. The home is weaponised. What was once a space of retreat has become filled with triggers. Not only has it shrunk because it is shared to the point of overlap, but its dramas and weaknesses (the things you feel private about: inadequate space, noisy family, awkwardly doting mom, etc.) are vulnerable to the outside gaze of colleagues and the constant threat of virus. You are defending what you also feel attacked by.

You have been standing in wrestler’s pose, hands up front, fists clenched, ready for defence or attack for over a year. Your mind and body have been erecting boundaries to restore an internal sense of structure. How long can you keep up a defensive posture? It creates a physical strain on the shoulders, neck, upper arms, back, knees, the feet. Your jaw is constantly clenched. Tension adheres to the body like an exoskeleton. You can become internally rigid: frantic about cleaning or meal times, or you can completely disengage from timetables, sending you into a spiral. You can’t bring yourself to bathe, or wear ironed clothes, even putting dishes in the sink feels like an effort. You become less tolerant of questions, everything seems like an attack when you are on the defensive. When you feel powerless, you say ‘No’ to things you could easily accommodate; this becomes a way of taking your power back. This is also why teens and the elderly become rebellious. They might invert their day. Awake at night, asleep by day, it allows them to reclaim some territory.

You turn on yourself. You internalise the outward aggression. You begin to punish yourself. You don’t eat or rest sufficiently because you don’t deserve it, after all you’re not productive enough. You’re a slacker, a loser; the negative self-talk begins. This sparks self-soothing, comfort eating, sleeping, feeling shut down.

It’s important to restore the boundaries of the fight. You fight only inside the ring, at a specific time. You know, before it begins, when it will end. You need to know the rules are ethical and fair. These are rules the HRs need to communicate.

Use strategic detachment. Disengage from the toxic parts of your family or work life. Walk away from what crosses boundaries. If it’s a call, say the electricity went off or your signal died. If it’s an argument at home, go for a walk or a bath, shut a door. Have strict cut off times for work. Have separate spaces for work and home. Don’t eat, talk to family, watch a show, or rest where you work. You have only a little strength left: use it to push back. Reclaim the game. 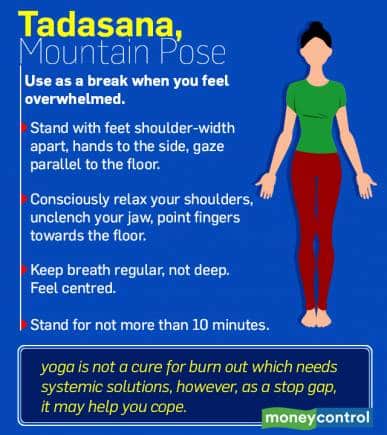 Gayatri Jayaraman Gayatri is a mind body spirit therapist and author of 'Sit Your Self Down', a novice’s journey to the heart of Vipassana and the forthcoming 'Anitya', a guide to coping with change.
TAGS: #Burn out #Healing Space #mental health #Pandemic anxiety #Self care #weekend reads
first published: May 16, 2021 11:26 am