Book Review | Preparing for Death is a poignant work, a reminder to accept the inevitable

Mortality is not optional but one can choose whether to live in denial or with equanimity is Arun Shourie’s message.

Preparing for Death (2020), written by Arun Shourie, is a comforting book to read as you segue into the new year and get ready to begin on a fresh note. The title might sound a bit depressing, especially for a pandemic year, but the pages are filled with insights gained through personal experience and wisdom borrowed from verse and scripture. Published by Penguin Random House India under its Viking imprint, this tome runs into 528 pages and 19 chapters—ideal for leisurely reading, with short breaks for reflection and journaling.

Those who do not see eye to eye with Shourie because of the choices he has made as an economist, journalist and politician might feel inclined to skip this volume but that would be a lost opportunity. This book is a poignant, timely offering for people in need of a reminder that death is not the undesirable monster one is conditioned to fear; it is built into the fabric of life. Decay and disintegration are natural processes, and it is possible to train the human mind—through gentle persistence—to accept this truth even if it seems abhorrent at first.

Shourie writes, “That instinct, that unstated conviction—‘I will not die this year, in any case not today’—is perhaps a Darwinian one, programmed into us to help us survive, to get us to put in the effort that today requires. And yet it also gets us to shut our eyes to what is around the corner.” According to him, “One way to prepare for the inevitable is to get to know it.” This can be done by looking upon death “not as a destination that we will one day reach but as a companion that is always walking arm-in-arm with us.” What a sobering realisation! 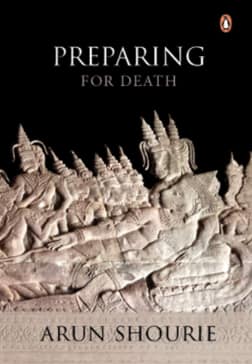 The author writes tenderly about the death of his parents, his wife’s experience with Parkinson’s disease and his worries about his 45-year-old son who has grown up with cerebral palsy. In addition, Shourie opens up a little about his own stay in the so-called “departure lounge”—a euphemism for the intensive care unit in a hospital—after his brain injury. These expressions of vulnerability are in keeping with the book’s core message that mortality is not optional but one can choose whether to live in denial or with equanimity.

The author weaves in excerpts from religious texts such as the Upanishads, the Dhammapada, the Bhagavad Gita, and the Bardo Thodol while ruminating on themes of impermanence, illness, suffering and mindfulness. His emphasis here is on the philosophy not the rituals. Displaying an affinity for Buddhist teachings, Shourie makes it clear that he is interested in coming to terms with “absolute aloneness” as an immutable fact of existence rather than seeking refuge in the fantasy of immortality and other kinds of speculations about the afterlife.

One way to prepare for the inevitable is to get to know it.
-Arun Shourie

To prepare for death is to “chip away at the ego” patiently and consistently. The author uses a pertinent example from the corridors of power that he is familiar with. He writes, “One gets accustomed to special attention, to being taken out of queues—not just while buying tickets but also in hospitals, even in temples; to not being checked at airports; to the restaurant owner refusing to charge one for the meal... We become our jobs, our nameplates, we become the room we are assigned—larger than the one occupied by others in the department.”

While Shourie’s reflections anticipate the forced obsolescence that is associated with old age, they are also relevant for younger people learning to adapt to change. As layoffs become more commonplace with companies merging or shutting down, their employees are forced to review their financial situation and take the necessary steps. Getting a new job could be difficult, and being self-employed or an entrepreneur is not everyone’s cup of tea. Such unforeseen situations fit into the larger reality that the only thing one can be sure of is uncertainty.

The knowledge that death can strike at any time is deeply unsettling for people who like to have everything planned in advance and are thrown into disarray when life springs a surprise. Shourie seems to have found solace and inspiration in spiritual teachers such as Gautama Buddha, Ramakrishna Paramahamsa, Ramana Maharshi, Basho, Chogyam Trungpa, Bulleh Shah and Ajahn Chah. He quotes them liberally and also poets and philosophers such as Faiz Ahmed Faiz, Mahatma Gandhi, Kabir, Vinoba Bhave and Hafeez Jalandhari.

These extracts can seem tedious at times because of their frequency and length. The book could have certainly benefited from some pruning. That said, the literary elements do serve to balance the pragmatism in other parts of the book where Shourie provides explicit guidance on how to write and register a will to minimise the inconvenience caused to loved ones left behind. This book will appeal to readers with a reflective bent of mind, who are not spooked by the thought of death and are willing to think about it with an open mind.