With a plethora of options now available in the segment, including a majority from Realme’s own stable, does the Realme C12 manage to out-do the competition? Our Realme C12 review will help you decide.

The budget smartphone space in India recently had some slots to fill, courtesy of the GST hike, and some other factors that forced brands to increase the price of their smartphones. Looking to make the most of it, Realme has launched a bunch of budget smartphones under Rs 10,000 lately under the C-series, one of which is the Realme C12.

The nomenclature might confuse you to think that Realme C12 is a successor to the Realme C11 that was launched earlier this year, but no. The entry-level smartphone sits between the C11 and C15 and is priced at Rs 8,999.

Realme provided us with a Realme C12 review unit for us to analyse and help you decide if this is the best smartphone under Rs 10,000 for you, the consumer.

With a plethora of options now available in the segment, including a majority from Realme’s own stable, does the Realme C12 manage to outdo the competition? Our Realme C12 review will help you decide.

Before we begin our Realme C12 review, let’s take a look at the spec-sheet.

Realme C12 has a 6.5-inch HD+ LCD with a 720*1,600 pixels resolution. Realme has tried to keep the bezels narrow on the sides but the chin bezel is considerably thick, just like the overall phone which is 9.8mm thick. Blame that massive 6,000 mAh battery for eating up so much room.

The company says that despite that chunky bottom bezel, Realme C12 has an 88.7 percent screen-to-body ratio for an immersive viewing experience. 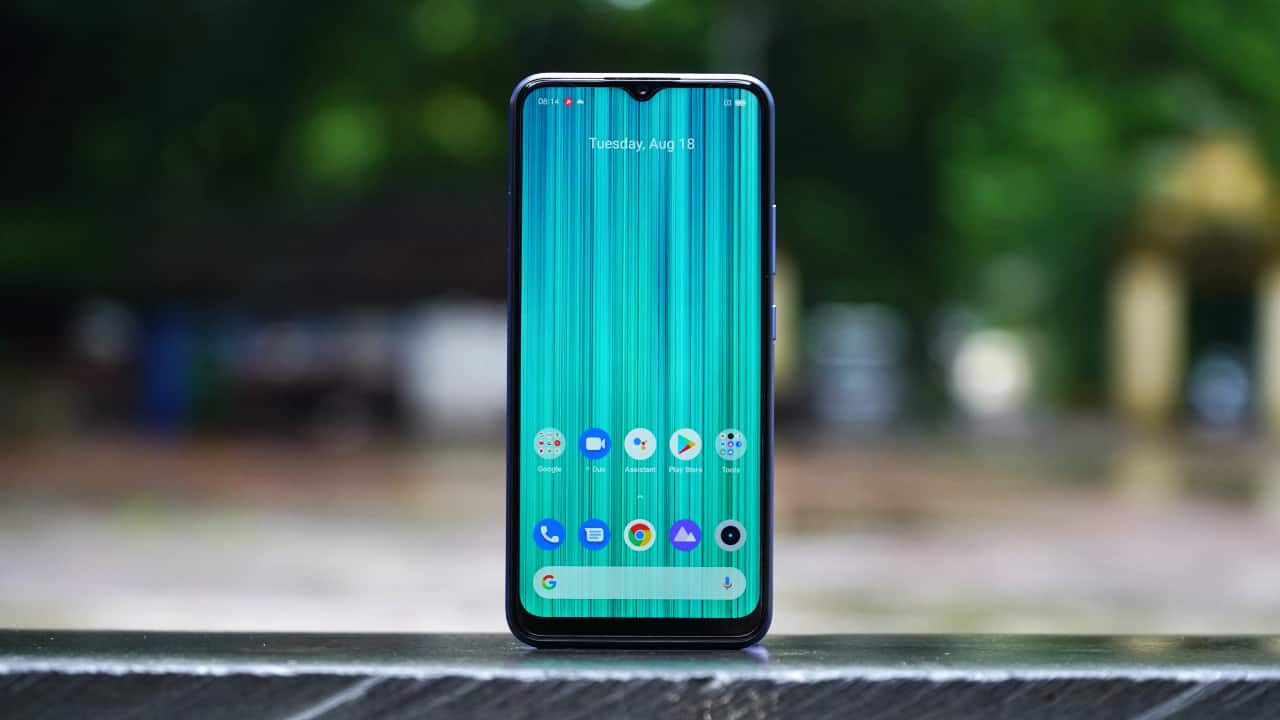 Viewing angles are quite okay and we noticed the display to be on the warmer side of the colour spectrum. You can play around with the screen colour temperature in the Settings app and adjust it to a cooler colour tone. The claimed brightness of 450 nits is more than enough for indoors but you might want to push the bar to full for being able to read what’s on the screen when outdoors.

You would also want to either use wired 3.5mm headphones or wireless earphones while watching video content. Although the bottom-firing mono-speaker, next to the micro-USB port and 3.5mm jack is loud, the quality deteriorates on full volume.

Realme C12 is also quite heavy at 209 grams. The polycarbonate back has what Realme calls a Geometric Gradient design with trapezoid lines dividing the rear panel into three areas with different shades of Blue. 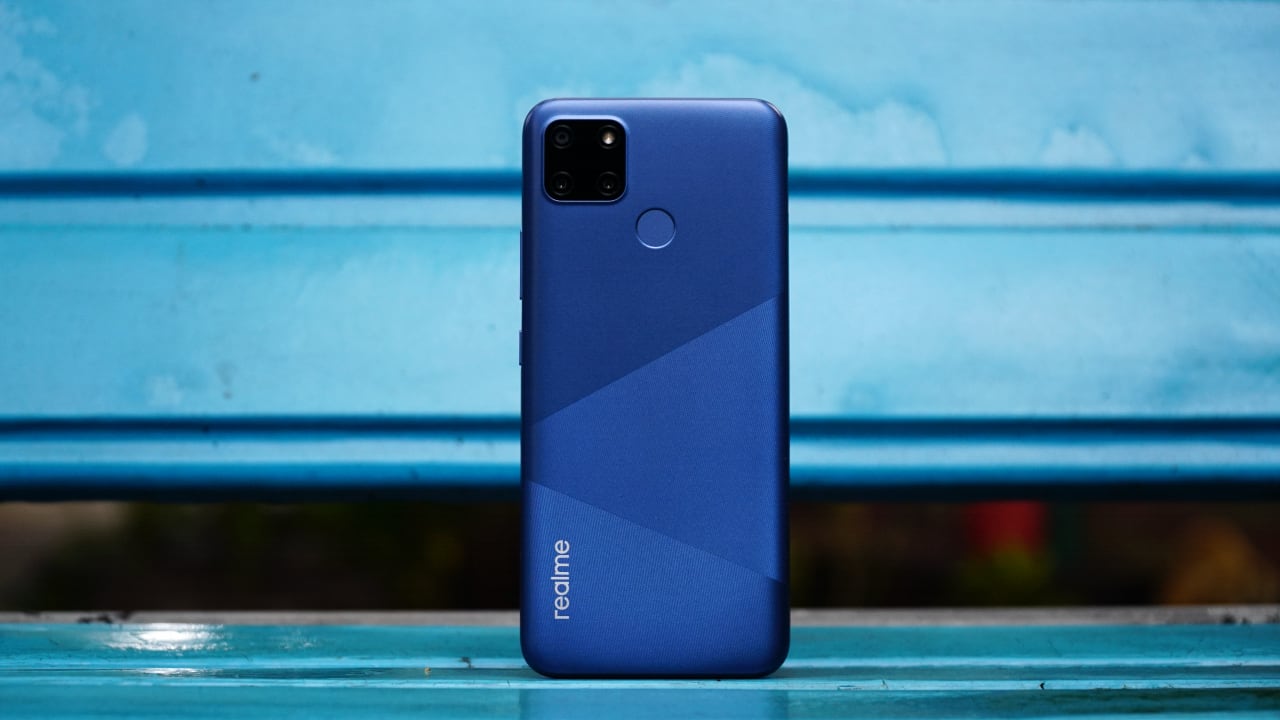 Realme calls this colour option Power Blue. In case that’s not your preferred colour, you might want to have a look at the Power Silver colour option. Fortunately, the back panel has tiny ridges that help in providing a better grip, unlike the smooth side frame which houses the power and volume buttons on the right edge.

There’s also a snappy fingerprint scanner etched on the back to unlock the device.

Thankfully, Realme has ditched the now-boring vertical camera array on the Realme C12 While we are at it, let’s get on to the camera performance of the Realme C12.

Realme C12 has a total of four camera sensors — three at the back and one front camera. The rear camera module gets a refreshed design. The three camera sensors — 13MP main, 2MP macro, 2MP depth sensor — and the LED flash are placed inside a square-shaped module. If you are someone who likes saturated colours, Realme C12’s main camera performs just like that. The software tends to boost up the greens. Else, images are mostly colour accurate. Photos are well exposed and you will only notice a lack in detail when you zoom in. Dynamic range is below average and the phone does not capture adequate details in shadows even in shots clicked during the day.

In low-light, the camera struggles, even with the night mode. The software softens the images to handle grains and noise but that also leads to loss of details. Night mode bumps the exposure to give you a slightly better output.

Portrait mode worked better than what we expected from a budget smartphone. Although edge detection is not accurate all the time, we were satisfied with the results overall. The 2MP macro lens produces usable photos provided there’s ample light. Keep in mind that you need to get the 4cm focal length right to get sharp images.

As for the 5MP front camera inside the notch, Realme’s done quite a good job. Colours are vibrant and the skin is not as smoothened as many other budget smartphones in the segment. This is of course after you turn off the beauty mode toggle.

Check the Flicker slideshow below to check photos clicked on Realme C12. 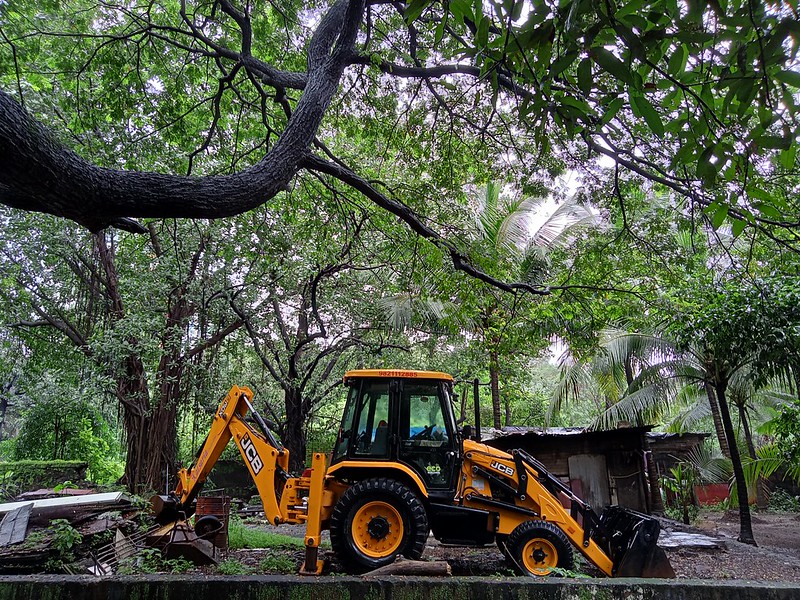 Realme C12’s USP is its battery. The 6,000 mAh battery can easily last for a couple of days with ease. Even if you play games on your smartphones, the phone can easily provide a screen-on time of 10+ hours. But, the problem is, you might not have a smooth gaming experience. The MediaTek Helio G35, although a gaming-based processor, struggles with graphics-heavy games like PUBG. While playing PUBG on the max settings — HD graphics and Medium frame rate — we experienced lag and switched to Smooth graphics and Low frame rate. For lite games like Ludo and Stick Cricket, the phone performs quite well. There is an occasional stutter here and there while performing day-to-day tasks either. The software does close some apps, courtesy of just 3GB RAM. But you can use Realme UI features like App Lock that prevent these selected apps from shutting down. A couple of areas where Realme C12 disappointed us is the addition of micro-USB port and a 10W charging. Its 2020 and launching phones with a micro-USB port must be a thing of the past. Realme should have launched the Realme C12 with a USB Type-C port at least. To keep the costs down, Realme is shipping the C12 with a 10W charger. That adapter takes close to three hours to charge the mammoth 6,000 mAh battery. Offering support for fast charging, if not a fast charger would have been better.

So who should buy Realme C12? If you want a smartphone under Rs 9,000 with big battery life and a large display, the Realme C12 can be an option. The smartphone also scores points for its reasonably good camera system but loses out on the performance part.

What are the alternatives? The problem for Realme is that it has so many options that can confuse buyers… and maybe even themselves. The Realme C3 fights for its space in an already-crowded segment involving the likes of Redmi 9 Prime, Realme’s own Realme C15, Realme C3 and Narzo 10A.

The Realme C3 (Review) offers a slightly faster MediaTek G70 chipset for better gaming performance and has a large 5,000 mAh battery for Rs 8,999. The Realme C3's display is also slightly brighter at 480 nits compared to the Realme C12.

The Narzo 10A (Review), another budget smartphone under Rs 10,000, offers the MediaTek G70 chipset + 5,000 mAh combo and similar camera setup for Rs 8,999. It is fairly identical to the Realme C3 but offers a different rear panel design.

If you can consider pushing your budget to Rs 10,000, consider buying the Redmi 9 Prime (Review). We believe that Redmi 9 Prime is the best smartphone under Rs 10,000 that ticks most boxes right with its value-for-money performance package.