2020 Audi RS7 review: Can it be your ultimate everyday car?

A look at whether this 600hp, four-door torpedo strikes the right balance between being enthralling, engaging and practical.

I can clearly recall the time I took the keys (or rather key fob) to the Mk1 Audi RS7, shortly after it’s India launch, back in 2014. Even with that Sportback roofline, it appeared relatively tame. Tame enough for me to ignore the unwritten statutory warning that accompanies all four-door torpedoes packing 553bhp of power.

Whatever trace of tameness the previous RS7 possessed, appears to have gone the way of the mastodon when it comes to the new, 2020 RS7. The powers that be at Audi have decided to lavish it with supercar musculature, throwing in a hint of restraint and making it, in my opinion, the sharpest looking Audi currently sold and quite possibly, one of the most sensational looking cars of all time. Quite a departure then, from the souped-up A7 that was its predecessor. The new RS7 goes up against similarly beefed-up and pedigreed super-sedans like the BMW M5 and the Mercedes-AMG E63 S, so the big question remains - does it have the chops to be the ringleader of this utterly baffling, yet exclusive club of cars? Ones which make outrageous power and furthermore, outrageous claims of everyday practicality? There’s bespoke levels of quality here, which goes a long way in justifying its staggering Rs 1.9 crore price tag. But just how much substance belies those devilish good looks? 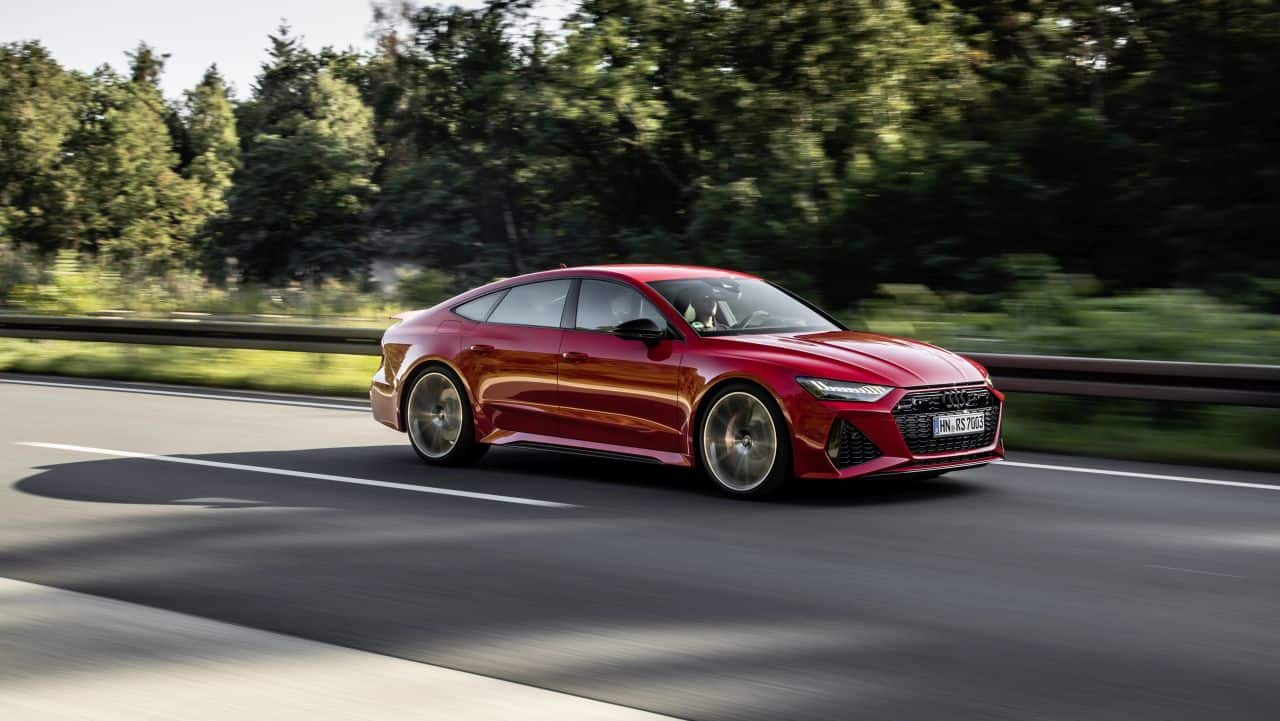 Up close, the RS7 seems chiseled to perfection. A large, hexagonal, single-frame grille, gaping air-intakes and popped-out wheel arches; the new RS7 looks the business. Audi has spared no effort and no expense in making the RS7 look and feel like a vastly superior breed of performance car, and the two additional doors in the middle of the front and that Sportback tail, are just semicolons punctuating a rather lengthy bit of prose, allowing your eyes to linger on that glorious frame a little longer, before you decide to step in. Translation: it’s enormous.

A global obsession with coupé-like rooflines notwithstanding, the RS7 does make a pretty strong case for it, especially since that rear is accompanied by enormous, oval tailpipes and an electronically-operated spoiler that remains tucked-in at speeds under 100kph. The real star may be that 4.0-litre, twin-turbo V8 engine, but what makes the RS7 stand-out is the fact that it drips with quality. There isn’t a crevice, contour or corner that isn’t gasp-inducingly plush. Thus far, it was the twin-turbo V6 powered RS5 that marked a breakthrough in Audi’s RS-powered cars. There was barely a hint of turbo lag and despite running short of two cylinders and afflicting the engine note with forced induction, the RS5 produced a soundtrack that was most invigorating. The RS7 being considerably more powerful, with a twin-turbo V8 engine producing 596bhp of power and 800Nm of torque (rivaling the previous generation RS7 Performance), makes for an interesting study,  just which Audi delivers the best RS level performance, pound-for-pound?. Especially considering the fact that the RS7 packs several more pounds, weighing a smidge over two tonnes.

All the math, power-to-weight ratios, and even the most compelling laws of physics, fade into oblivion, the second you floor the throttle. And that’s saying something because this car does 0-100 in 3.6 seconds. The RS7 brings back the gentle blow to the gut, that feels increasingly muted as time and G-forces roll by. Aside from that V8, there’s a 48V mild-hybrid system at work and cylinder deactivation tech that comes as standard, switching to a V4 under light loads. The 8-speed automatic, making do with a single clutch because the torque on this would straight up fry a twin-clutch arrangement. The standard air suspension girds itself in Audi’s ‘Dynamic’ driving mode, with rear-wheel steering does go a long way in masking its dimensions, but in no way is the RS7 B-road friendly. What it is, is a good sport. Far greater than its predecessor, which liked to err on the side of caution and constraint. The 2020 car has no such compunctions. It’s even got a foreboding ‘RS’ switch on the steering, which allows you to initiate, poorly-thought out drifts, sending 85% of power to the rear, much against the instincts of the super nanny that is Audi’s patented Quattro system.

Pressing that ‘RS’ button results in a sudden deepening of the RS7’s voice, with a heads-up-display throwing-up a boomerang-shaped rev counter, that makes one’s inner nine-year-old, giddy with joy. Bless their heart, Audi has gone as far as equipping the RS7 with room for a tow-bar which can pull caravans for eager European holiday makers. They’ve even thrown in a split-bench at the back, so it’s clear that they wish to make it as practical as possible. And having spent considerable time behind its flat-bottomed, leather-wrapped wheel, I daresay, it is. Despite encountering speed bumps the size of hillocks, and lunar surface mimicking roads, the RS7 coasted along with perfect ease. In ‘Comfort’ mode, the suspension is as supple and pliable as any other comfort-oriented Audi. It goes from that to hardcore at the literal flick of a switch. There are even two ‘RS’ settings allowing you to customise the drivetrain setup to your liking.

What Audi has done here is heeded the advice of enthusiasts in making the RS7 more engaging and a bit less serious. However, in typical Audi fashion, they’ve done this keeping in mind that its predominant characteristic must be of an avuncular grand tourer, which, when calibrated right, can turn into a hellraiser. It’s the RS7’s ability to switch characters like a master thespian that puts it in the hall of greats. And it is its grown-up and evolved mannerisms that will keep it out of the garage, and on the roads for most of its lifespan.
Parth Charan is a Mumbai-based writer who’s written extensively on cars for over seven years.
Parth Charan
Tags: #Audi #Audi RS7 #Auto #Technology
first published: Nov 28, 2020 11:33 am