Last month, Asus launched its first gaming laptop powered by the new Ryzen 4000 H series processors in India. The company refreshed its affordable TUF lineup with AMD's new 7nm mobile processors coupled with Nvidia's GTX 16 series GPUs. The TUF A15 can be equipped with up to an AMD Ryzen 9 4900H processor and up to an Nvidia RTX 2060 graphics card.

Our model arrived with an AMD Ryzen 5 4600H CPU and an Nvidia GTX 1650Ti GPU, an ideal configuration for an entry-level gaming laptop. So, without any further delays, let's get into the full review of the Asus TUF A15 gaming laptop. The Asus TUF A15 starts from Rs 60,990, but our model was priced at Rs 70,990.

The new TUF laptops are available in two colour options, Fortress Grey and Bonfire Black. Our model arrived in Bonfire Black, although the Fortress Grey finish does look a tad bit better. The lid of the A15 has a brushed finish and is made up of aluminium and plastic. For an entry-level gaming laptop, the design, build quality, and finish are all top-notch. Asus has also left a small bump on the lid to allow you to open the laptop with one hand. The one gripe we had with this laptop was with the hinges, which unfortunately wobbles a lot. It is not a big deal but can be a little distracting when you are typing up something on your lap.

The TUF A15 has a generous assortment of ports. On the left, you get two USB 3.2 Type-A ports, an HDMI input, a USB Type-C port, a headphone/microphone jack, and an all-important RJ-45 Ethernet port for a fast and reliable wired internet connection, which is of the utmost importance while gaming. The left side houses a USB 2.0 port and a Kensington lock slot. There's no SD card slot, but that didn't bother us, the selection of ports is excellent here. Asus has incorporated a full-size keyboard with traditional ROG fonts on the new TUF A15. The keyboard features zonal RGB backlighting and can be customized using Asus' proprietary software. Additionally, the "WASD" keys are translucent, while the keys in general feature a nice travel distance that is quite pleasing for both gaming and typing. The A15 has a smooth trackpad with a plastic finish, which may not be as good as the glass trackpads on expensive laptops, but gets the job done really well. It also has support for Windows Precision Drivers.

The TUF A15 arrives with a 15.6-inch Full HD (1080p) IPS panel. For the 15-inch model, Asus offers 60 and 144-hertz refresh rate options, while the A17 maxes out at 120Hz. Our model featured a 144Hz refresh rate. The high refresh rate panel is ideal for gaming, particularly in first-person shooters. However, beyond gaming and watching content, the display is not particularly useful. The screen is quite dim, even at the highest level of brightness and colour accuracy is certainly sub-par, even for a gaming laptop. Don't get us wrong; it is still a good screen for gaming and watching content, while basic editing of photos and videos shouldn't be much of a problem. Lastly, the response time on the panel isn't very good as well, we didn't notice much of a difference while gaming, but if you are a competitive fps gamer, you might notice a difference.

Our TUF A15 model featured an AMD Ryzen 5 4600H paired with a dedicated GTX GeForce 1650Ti graphics card. The notebook featured 8GB DDR4 3200MHz SDRAM, 1TB SATA HDD and a 256GB PCIe Gen3 SSD. In Cinebench R20, AMD's Ryzen 5 4600H CPU managed a score of 451 and 3212 in single and multi-threaded performance, respectively. This puts the Ryzen 5 on par with some of Intel's best, including some of Intel's 10th Gen Core i7 processors.

We tested multiple games on the TUF A15, including AAA and multiplayer titles.

In Battlefield V, we managed 60 fps on average on high settings. Since we tested it in campaign mode, we recommend playing multiplayer on medium settings to ensure frame rates don't fall below 60 fps.

Shadow of the Tomb Raider

In Shadow of the Tomb Raider, you can just about hit 60 fps on medium settings. However, you can easily play the game on high settings with an average of 50 fps.

Apex Legends, on the other hand, managed between 55 to 65 fps on high settings and can easily surpass 75 fps on average in medium settings.

Borderlands 3 hit 63 fps on average on medium settings, while turning it up to high settings can take a significant hit on frame rates, dropping it to as low as 43 fps. 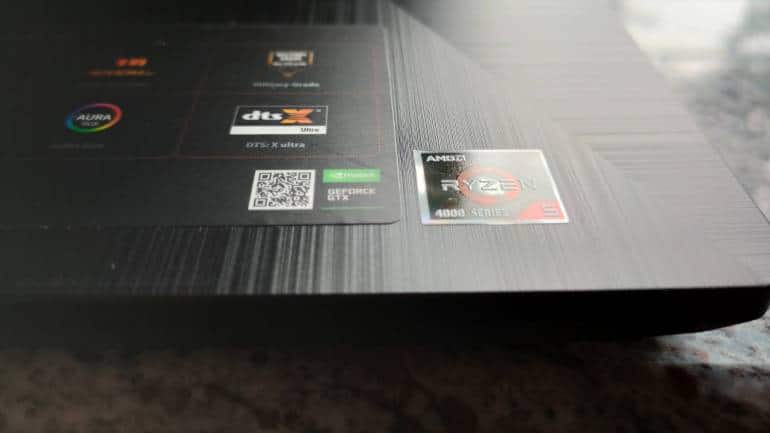 One of the big questions' users posed was why Asus added a 144Hz display when games on the laptop barely push past 60 fps. In our opinion, the high refresh rate display is meant for gamers who want to play competitive multiplayer titles and don't mind sacrificing graphics for more fps. We tested a couple of older titles that easily managed to push past the 144Hz threshold.

DOTA 2 managed an average of 108 fps on ultra, while Heroes of the Storm pushed past 80 fps on average with the settings maxed out. Both games can hit the 144 fps mark by simply lowering the settings.

In terms of older fps titles, both CS: GO, and Overwatch managed to cross the 100 fps mark, with the latter managing 140 fps on high settings. Fortnite is yet another popular title that can take advantage of the 144Hz panel. You can expect anywhere between 80 and 100 fps in Fortnite on high settings, while medium settings yield 135 fps on average.

Now, if you are not interested in multiplayer games, and do not see the point of a high refresh rate screen, Asus has another option. Yes, the TUF A15 is available with a 60Hz display option, which is around Rs 10,000 less than this model, which we feel is a fair trade-off.

Asus' cooling solution on the TUF A15 is not the best, especially considering the company has been impressive in this area in the past. However, the cooling system gets the job done adequately. The CPU and GPU can hit 85 degrees, but temperatures are slightly lower than older laptops 9th Gen and Ryzen 3000 laptops at this price. For the most part, thermal throttling remains a non-issue here. Overall, the TUF A15 does an excellent job in terms of performance for its price. But this is the first notebook we've tested with the new Ryzen 4000 series chip, so it is still too early to say if Asus has managed to perfectly adopt AMD's new Ryzen CPU here.

The Asus TUF A15 packs a 48 Wh lithium-polymer battery, which can deliver impressive battery life. We managed to eke out a little over four and a half hours with some intense multi-tasking, between Chrome, Excel, and Word. During our test, we set the screen at around 70-percent brightness. The battery gains further benefit from AMD's 7nm Zen 2 architecture, which offers big gains in power efficiency. While watching videos on YouTube or shows on Netflix, you can get around six hours of battery life. We felt battery life to be above the average offered by competitors or previous Asus gaming laptops in this price range. For audio performance, you get stereo speakers with DTS:X Ultra sound. The speakers can get quite loud, while audio does not sound distorted on high volumes. It is not the best speaker system for music but gets the job done while gaming and watching movies. Additionally, the speakers are loud enough to be audible without getting drowned out by the fan noise. The TUF A15 has a 720p webcam in the top bezel, the camera and microphone are pretty average here. But with Asus gaming laptops, 'average webcam is better than no webcam'.

Overall, the new Asus TUF A15 is a pretty strong gaming laptop, the new Ryzen chip brings some big gains in performance, while also aiding with power efficiency. This is the perfect laptop for a working professional, looking to get back to the good old gaming days. The TUF A15's performance will allow you to play just about any game. And while lowering settings might not seem appealing, it is a fair tradeoff in competitive multiplayer games, where the name of the game is 'winning at all cost'.Beyond performance, the TUF A15 does above average in other areas as well, including design, build quality, port selection, battery life, and keyboard. Even audio performance is better than decent for its relative price. However, the one area where the TUF A15 struggles quite a bit is in 'display'. We felt the display to be sub-par, even at this price. If you are looking to buy a laptop with a Rs 60,000 to 70,000 budget, this is a pretty good pick. In our opinion, the performance gains delivered by the new Ryzen chip are enough to overcome the sub-par display.
Carlsen Martin
TAGS: #AMD #Asus #gaming #laptops
first published: Jul 11, 2020 02:30 pm