The Bharatiya Janata Party (BJP) is all set to form the government in Assam for the second consecutive term after an emphatic win in the north-eastern state. The saffron alliance won 75 seats, while the opposition 'Grand Alliance' comprising the Congress, AIUDF and eight other parties drew 50.

The ruling BJP was seeking to return to power amid competition from 'Mahajoth' or 'Grand Alliance' comprising the Congress, AIUDF, Bodoland Peoples' Front (BPF), and CPI(M).

Sonowal said the people had blessed them. “A victory for Barak-Brahmaputra, Hills & Plains. Thank you Hon’ble PM Narendra Modi,” he said.

Click here for key highlights from the counting day 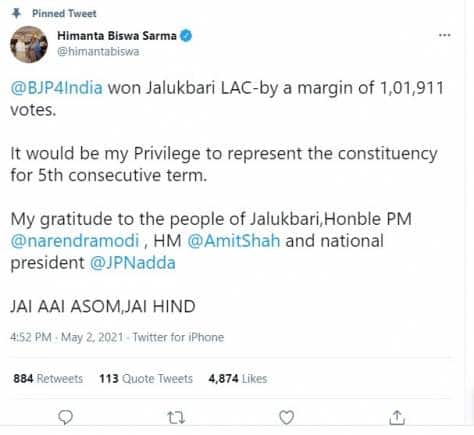 Sarma said the BJP will soon form the government in the state and the party will decide who will be made the next chief minister.

Speaker of the outgoing assembly Hitendra Nath Goswami, who was trailing in the earlier rounds behind former Congress MLA Rana Goswami, managed to clinch a victory by a margin of 6488 votes. His deputy Aminul Haque Laskar, however, lost the race in Sonai constituency to AIUDF's Karimuddin

Among other heavyweight candidates, jailed Raijor Dal President and anti-CAA activist Akhil Gogoi, who contested as an independent, won the Sibsagar constituency by defeating his nearest BJP rival Surabhi Rajkonwari by 11.878 votes.

The new political party Assam Jatiya Parishad made a disastrous electoral foray. It failed to open its account and the party president Lurinjyoti Gogoi lost from both the constituencies he contested.

Congress' Assam president Ripun Bora too lost and resigned after the poll debacle. "...I courageously accept the verdict of the people. We fought till the end. I would also like to thank all those who supported me. But we will continue our fight for peace, democracy and secularism," Bora said.

Assam has a 126-member assembly and 64 seats are needed for a simple majority.