What hike in natural gas price means for stakeholders

In the recent bi-annual revision, the domestic prices of natural gas were hiked by almost 6 percent. This is the second consecutive hike after five previous price cuts. The new rates would be applicable for gas sales between April to September 2018. Amid rapidly increasing demand for natural gas, the move provides some respite for the domestic upstream oil and gas companies who could foresee a tad uptick in realizations, though it might lead to increased costs for consumers, both domestic and industrial. 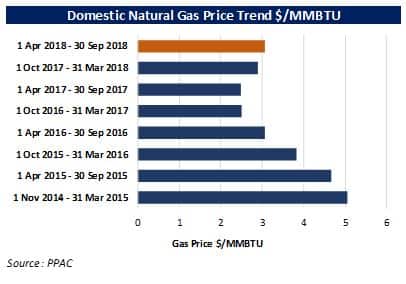 The domestic prices of natural gas have been revised upward by around 6 percent applicable between April – September 2018. This takes prices to USD 3.06 per MMBTU (million British thermal units) from the earlier USD 2.89 per MMBTU, with a price ceiling for gas from deep and ultra-deep water and high pressure-high temperature areas at USD 6.78 per MMBTU, an uptick of around 7.6 percent. Although the highest in the last two years, the revised price still remains significantly lower than the prices prevailing at the time of introduction of the new pricing formula in November 2014 and much below profitable levels.

Domestic gas consumption has been much more than total gas production in India and around 50 percent of the total domestic demand is met through imports. The percentage contribution of imports has been on a rapid uptick since 2011 when gas imports contributed a mere 21 percent. Apart from operational and technical constraints, low prices keep domestic gas exploration and production unattractive for the companies and thereby hinder rapid ramping up of output.

What it holds for upstream oil companies

The hike in the rates provides some relief to the upstream oil and gas companies like ONGC, Oil India etc. for whom the production of gas broadly remains either a break-even or a loss-making proposition. However, absolute impact of the hike on the EPS and profitability remains limited due to the minor contribution of gas in the overall revenues and profits of the upstream companies. Natural gas forms around 17-18 percent of the overall revenue for the public sector upstream oil companies like ONGC and Oil India and mere 1 percent for Reliance Industries.

As per the ONGC management USD 4.2 per MMBTU is the level at which the gas production segment turns profitable and anywhere below that level makes it a negative profits proposition. During 2016-17 alone, low prices set by the government ate away almost Rs 3,000 crore from the profits of ONGC.

Impact on the consumers and industries Post the announcement of the hike in benchmark rates, the prices of CNG and piped gas were revised in Delhi NCR. Following suit, downstream gas companies are expected to pass on the impact of gas hike to consumers both domestic as well as industrial. This would lead to an increase in costs for many industries which use gas as an input.

The cost of domestic gas-based power generation companies is expected to go up by about 3 percent. The hike would also result in an upward revision of CNG and piped cooking gas prices by 50p-55p and 35p-40p per standard cubic meter, respectively. It would also lead to higher cost of production for fertilizer and urea companies and to a certain extent the petrochemical companies who use gas as an input.

Although the move would provide some relief to gas producers, the impact of the benefit would remain limited owing to the little contribution of gas revenue in the total revenue profile. Moreover, the current price level still remains much lower than the profitable level due to which gas production and exploration would continue to remain non-lucrative. The increase in prices however has the potential to bring higher production costs for domestic power generation, fertilizers and urea producers, Petrochemical companies and other industries which are dependent on gas as an input for production and operations.