Climate-change, depleting reservoirs and the blindness to water treatment and recycling

India can certainly avoid water-riots if it manages water well – the way China and Israel have. Unlike them, India recycles only 30 percent of its waste water.

Climate change is the buzz word. And it is likely that both agriculture and water availability will be severely hit, unless the right measures are taken immediately. Unseasonal rains and excessive heat affect crop productivity adversely. Finally, as ground water resources get depleted, water scarcity will become excruciatingly painful.

Uma Aslekar, who works on groundwater with an NGO called ACWADAM, headquartered in Pune, puts it succinctly, "Groundwater is one of the most ignored subjects in Maharashtra, as well as in India. We cannot ignore groundwater, because more than 90 percent to 95 percent of our public water supply schemes are based on groundwater."

She points out how 65 percent of irrigation is groundwater-based in India (in Maharashtra it is 95 percent). "It's very difficult for people to understand this, because it's a source which is out of sight and hence, often, out of mind as well," she adds. "We need to make people aware about the concept of aquifers."

As the entire world gets racked by climate change, at least two-thirds of humanity which currently lives in zones that experience water scarcity for at least one month a year will find water more difficult to come by. Unless new methods are adopted to gather water, treat it, and recycle it.

That is why, the check-dams-strategy that Narendra Modi advocated and got implemented while he was Chief Minister of Gujarat needs to be commended and replicated. Ditto with the Jal Yukt Shivir programme launched by Maharashtra Chief Minister Devendra Fadnavis (though this has often been misused.)

Earlier it used to rain for 40-45 days. Today, rainfall occurs for just 15 days – though with greater intensity. So while water had the time to lazily flow through fields and soak into the ground earlier, today you have bigger runoffs, causing water to flow into drains and then into the sea.  Maharashtra's disastrous cropping pattern focussing on sugarcane also adds to the crisis, and is primarily responsible for over 12,000 farmer suicides during the past four years.

Nothing destroys groundwater as quickly as untreated sewage and industrial effluents. This is another area that India has ignored, much to its own peril. As pointed out earlier in this series, India is blessed with more water than many Asian countries. But it has misused and abused water to the point where it has become scarce and is now causing death and destruction.

SwachIndia, of NDTV.com, puts this across quite well. "India is the biggest consumer of freshwater in the world today, accounting for about 750 billion cubic metres annually... For a country which accounts for only 4 percent of the world's water resources despite hosting 17 percent of the world's population, the water crisis is a looming danger we should be wary of. The Central Pollution Control Board (CPCB) estimates that by 2030, India's water demand is expected to rise to 1.5 trillion cubic metres."

India can certainly avoid water-riots if it manages water well – the way China and Israel have. Unlike them, India recycles only 30 percent of its waste water. But even this figure is generous. In many states, barely 5 percent of the solid waste generated gets collected and treated. In fact, the highest figure comes to around 30 percent (see chart alongside). 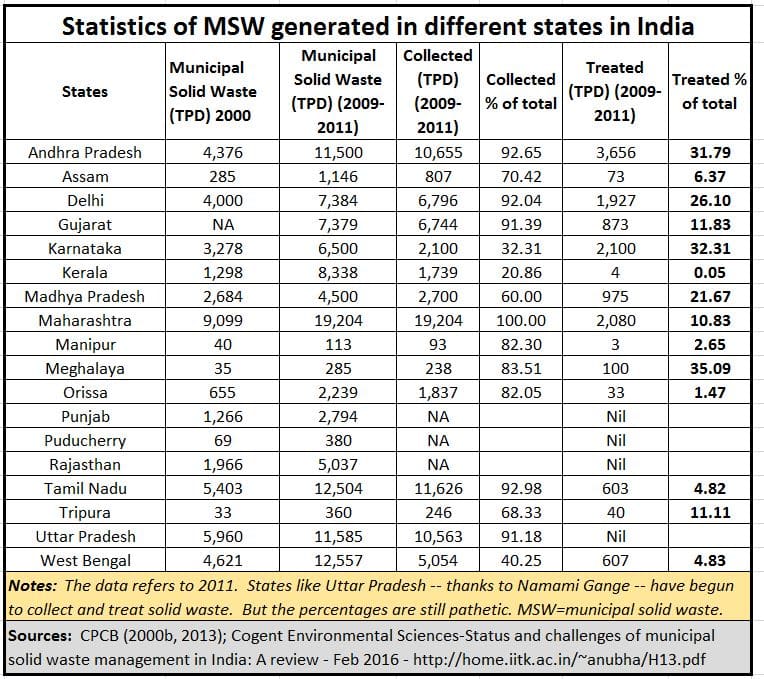 All waste invariably goes underground and contaminates ground water reserves. This becomes more serious when one deals with industrial waste, because it has more contaminants that can kill and maim future generations. Unfortunately, the present state of effluent treatment and monitoring can be very messy because, as the Madhav Gadgil report on environment in the Western Ghats of India points out, some industrial units try to escape treatment of effluents by recklessly drilling holes in the ground and make the discharge disappear there. This has the potential of destroying countless generations of people in the vicinity.

Moreover, there is no attempt to enforce the rule of "polluter pays". By paying more for more toxic or difficult-to-treat effluents, the onus rests on the companies that emit more hazardous pollutants. Instead, India still prefers to adopt a single flat tariff for effluent treatment from all units in an industrial zone – and even this is not paid for fully.

Thus, sewage discharge continues to grow. According to ENVIS Centre on Hygiene, Sanitation, Sewage Treatment Systems and Technology, India produces a total sewage of 61,754 million litres daily (MLD), and untreated sewage of 38,791 MLD. Against this, the total sewage treatment capacity is only 22,963 MLD or 23 percent of the sewage output.

According to the UN World Water Development Report, while wastewater treatment levels can reach 70 percent in high-income countries, the ratio in upper-middle-income and in lower-middle-income countries drops to 38 percent and 28 percent, respectively. Thus the figures given above (23 percent) are lower. The only saving grace is that India does not resemble a low-income country where only 8 percent of industrial and municipal wastewater undergoes treatment of any kind.

Unfortunately, much of India's sewage gets discharged directly into rivers or lakes. That explains why the Ganges and the Yamuna are so polluted. It is cheaper and easier to stop sewage discharge into the rivers, than it is to clean them. India has often ignored the former.

The UN states that over 8,00,000 people die every year because of contaminated drinking water, and not being able to properly wash their hands. Water-related diseases claim nearly 3.5 million lives annually in Africa, Asia and Latin America — more than the global death toll from AIDS and car crashes combined. More details on the views of the UN can be found from The United Nations World Water Development Report 2019. 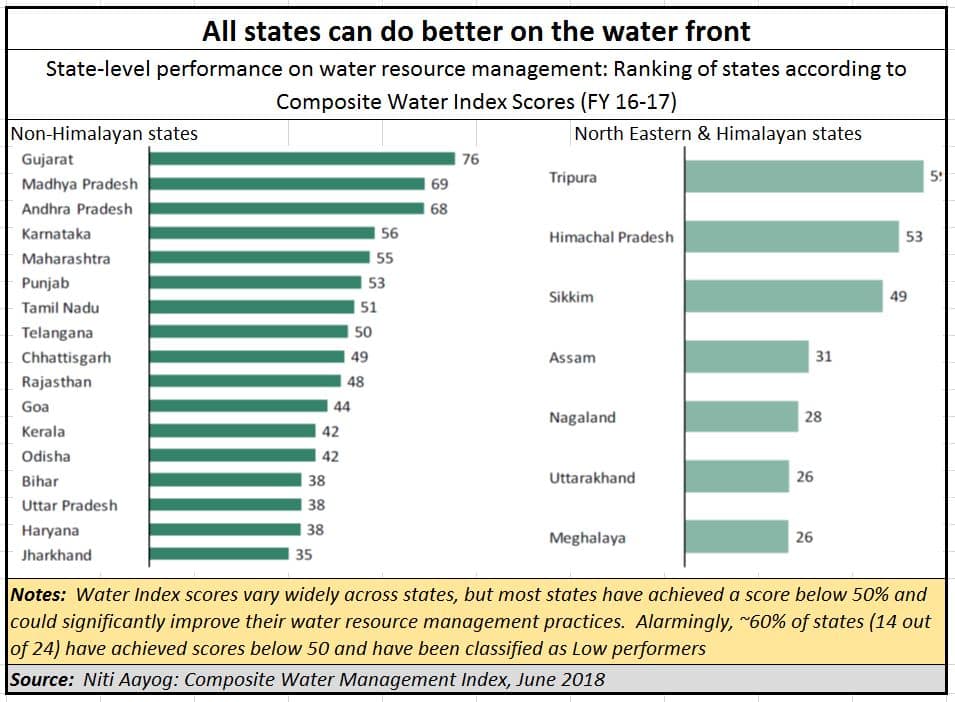 Even so, most states have a terrible record when it comes to water management. As a Niti Aayog document shows (see chart), more than 60 percent of the states score less than 50 percent on the water management front. This needs to change. And even while the UN expects to halve the proportion of untreated wastewater and increase safe water reuse worldwide, India will first have to work towards better legislation, better compliance and more enforcement of severe penalties for any disrespect for water by bureaucrat or consumer.

This is where new policies need to be crafted. Fortunately, there is plenty of money to be made from water and waste management. And from new technologies in agriculture.

But more on that later.