Pre-Budget series | Barbarians at the gates of education

Unfortunately, successive governments – both at the Centre and the states – allowed primary education to get degraded and debased. As a result, only children of privileged families can now afford good education.

I write this note both as a journalist as well as a person closely involved with the world of academics. And also as a concerned citizen.

I write this note also because – of all investments any government can make in any country (especially in developing economies) the most crucial are investments in education.  This is particularly true of primary and secondary education, which are also constitutional obligations on any government in charge of affairs in this country.

It is school education that can be a great leveller.  It is the best way by which a child from an underprivileged background can hope to be at par with, or even outclass children from a more affluent background.  It is the foundation for making a more egalitarian society.  It is also the surest way of creating a future manpower pool that can generate economic wealth for the country.

In this context, I would like to highlight an issue that most people often forget.  India was never a champion of universal education in the past.  True it had gurukuls.  But they were for children of nobility and priestly classes (like elsewhere in the world).  Then the Buddhists arrived on the scene, and set up Nalanda and Takshashila.  True, they were for monks, and were monasteries as well, but they were meant for all children and students, not for those belonging to privileged backgrounds. Then came the Jesuits and set up schools.  India then adopted the Jesuit model and the Constitution of India guaranteed universal school education.

Unfortunately, successive governments – both at the Centre and the states – allowed primary education to get degraded and debased. As a result, only children of privileged families can now afford good education.  The masses were left with schools which actually corroded human capital.  It is not surprising that India’s scores on the Human Capital Index (HCI) introduced by the World Bank a couple of years ago, were lower than those of any of its neighbours with the exception of Pakistan. But Pakistan cannot be a benchmark for India, isn't it?

So, what should you do to help India become stronger?

It is important to point out here that spending on education was 2.7 percent of GDP for the financial year 2018, down from 3.1 percent in FY13. Undoubtedly, the allocation went up in 2019, as pointed out by the HRD minister to 4.6 per cent.  But it is still very low. Compared to peers, India spends the least on education. 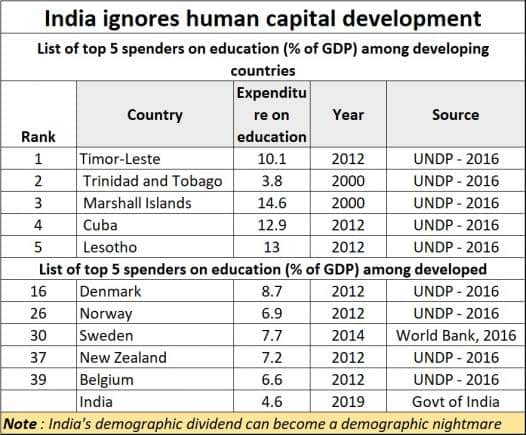 Second, withhold financial incentives to trusts managing schools and colleges if they do not improve literacy and employability rates

That can be done by measuring outcomes, not just by going through exam scores.

Just look at the results.  India's literacy rates are quite low even today.  True, the government claims a rate of 79.31 percent (2011 census).  Other sources put it much lower at 64.7 percent.  It could be much lower because India's official definition of literacy still remains anyone who can read and write his or her name. So if Uma can read and write just the three letters of her name, she would be classified as literate.

In fact, look at the scores Pratham's Aser report comes up with. It points our how, in 2018, only 44.2 percent of the boys in Std V could read the books meant for Std II.  The score had declined from 53.1 percent in 2008.  That is certainly not a comfortable situation to be in.

But worse, take employability.  Just look at the government’s own reply in the Lok Sabha (see chart). 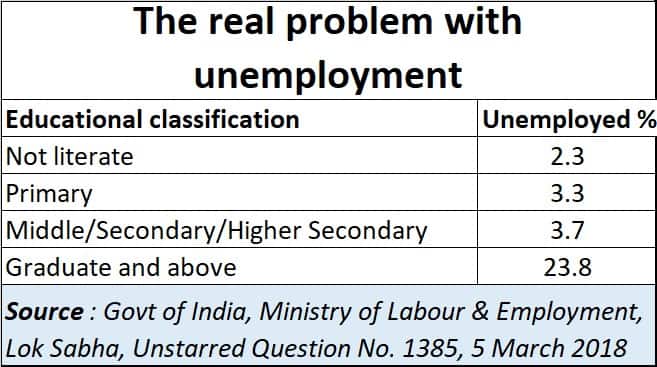 There are hardly any unemployed people among the not-literate. The real problem of employment is among graduates-and-above.

But this is primarily because Indian graduates are unemployable.  Ask TCS and McKenzie and they will tell you that barely 20-30 percent of India’s graduates are employable. Ask the big law firms and they will put the employability figure at under 5 percent. This is because colleges and universities have to deal with "sub-standard" students coming from schools.   No amount of good college education can remedy the rot that comes from schools.

Sadly, when too many students fail, politicians insist that they be promoted on humanitarian grounds. When a student commits suicide, there is a clamour to make tests easier, and syllabi simpler.

So this is what the finance ministry, in conjunction with the HRD ministry, should do.  Increase budgetary allocations.  Pay more to teachers.  But measure their outcomes.  See how many students improved scores through methods like the one Pratham uses, through reliable third-party inspections.

Then, in conjunction with the HRD ministry, it should do two other things.  First, just as it has brought in all-India NEET exams for engineering and medical college admissions, it should use such scores for all students to get into colleges.  Students who do not meet the grade should not be allowed to go to colleges.

That will make graduates employable.  That will stop wasting five more years of students, and push them towards other vocational courses that are equally lucrative. And it would save on funds which could be used to bolster primary and secondary education.

Finally, remember that education is the basic building block for any economic growth.  Just as the country has learnt to respect merit and competence for cricket teams and the military, it must be told that you must have merit governing the intake of teachers. You cannot have reservations in lieu of merit there because they will corrode the entire generation of future economy makers. Just last fortnight, teachers of prestigious IITs and IIMs too decided to protest to the government over moves to bring in reservation at these institutes of higher learning.

Is the government going to push India back to the ancient times when education was a privilege only for the privileged?  Will India create an army of Yahoos (as described in Gulliver's Travels of Jonathan Swift)?

If there has to be economic revival, focus on merit is critical – for education and for jobs.  If there has to be preferential treatment, it must be at primary and secondary school stages.  Increase the allocations ten times.  Make sure that the most underprivileged of children gets exclusive attention from competent teachers.  But after high school, let merit take centre stage.

If you want to create an India that people can be proud of, make its people more competent and confident.  That happens through education and focus on merit.  The finance ministry has a crucial role in this because the purse strings are with the finance ministry.  Use these powers with vision. Make India a great country again!