This number was 31,000 in 2020. With demand for technology services continuing to outstrip supply, the IT companies stepped up fresher hiring

Three IT companies -- TCS, Infosys and Wipro -- added a record 1.7 lakh employees for 2021, a multi-fold increase from the 31,000 they had hired in 2020. This jump in hiring comes on the back of acceleration in digital technologies and rising attrition.

With demand for technology services continuing to outstrip supply, the IT companies also stepped up their fresher hiring to meet the growing demand.

For the first three quarters of FY22, the three companies hired 1.34 lakh employees, compared with 35,000 between April and December 2020.

The three IT firms stepped up their fresher hiring numbers in FY22. At 17,500, Wipro’s fresher hiring is 70 percent more than what the company hired in FY21. Infosys will hire 55,000 freshers in FY22, and TCS has on-boarded a record 78,000 campus recruits so far.

This momentum is likely to continue in the next year as well. When the pandemic hit, it resulted in increased consumption of technology services as consumers adapted to online services, from buying vegetables and other essentials to consulting doctors and transacting virtually.

This meant that businesses had to move to digital and fast. After the initial drop in discretionary spending at the beginning of the pandemic in 2020, enterprises the world over are heavily investing in digital services, to create online presence and for migrating to the cloud. These companies are working with IT service providers for accelerating the process for them.

All this have resulted in huge IT demand, which is expected to sustain in the coming year, going by the commentary from IT executives. This has translated to double-digit growth for IT.

Another reason for increasing hiring is attrition. With the demand so high, technology professionals are more in demand than ever before, and companies are fighting over the limited talent pool, especially in the area of new-age digital skills.

This war for talent is one of the biggest challenges for the companies.

Rishad Premji, executive chairman, Wipro, in a recent event, shared that companies that win the war for talent will have an upper hand in the market.

TCS, Infosys and Wipro reported 15.3 percent, 25.5 percent and 22.7 percent attrition respectively for the quarter ending December 2021. This is after recording one of the lowest rates in the beginning of 2021. 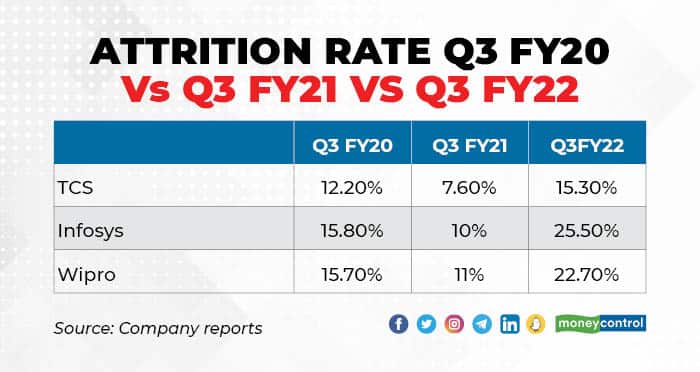 What are companies doing to address the issue?

In recent interactions, multiple executives and recruiters have shared that attrition is likely to continue, but is expected to stabilise as more freshers join the productive workforce. An executive with a mid-tier IT firm pointed out that employee churn is expected to come down by mid-2022.

In the meantime, IT firms are taking multiple measures.

Thierry Delaporte, CEO, Wipro, said that while attrition at 22.7 percent is lower than anticipated, the company is building its talent pipeline to cater to the demand by increasing its fresher supply. The company plans to hire 30,000 freshers in FY23.

While TCS has always been one of the largest recruiters on the campuses, it almost doubled its fresher supply for the year. From 40,000 in FY21, it has already on-boarded 78,000 campus hires so far. Infosys too upped its fresher hiring twice in the year on the back of unprecedented demand.

There is a huge focus on reskilling as well. Premji shared during the event that with the huge gap in the demand and supply, there is focus on upskilling and reskilling employees to make them ready for the opportunities coming in.

TCS, in the earnings statement, said that 32.3 percent of open positions were fulfilled through up-skilling/cross-skilling.