Tax experts are of the view that the government should consider bringing under-construction properties under the same GST bracket as ready-to-move-in properties. This would help homebuyers immensely.

While there is no GST on properties with occupation certificates (OCs), those without OCs and under construction are charged at 1 per cent in the case of affordable housing and 5 percent in other cases.

The goods and services tax regime completes five years on July 1. Since it came into existence in 2017, the GST Council has met 47 times and has made several changes in tax slabs and policies. The real estate sector has also witnessed changes in the tax slabs, one of them being the abolition of input tax credit (IT).

The government introduced the new tax slabs for the sector in 2019 and did away with ITC and brought in the composite scheme.

Tax experts are of the view that the removal of ITC has increased property prices for the end users, i.e. homebuyers.

“In the absence of ITC, the additional tax implication gets added to the value of the flats, thus impacting the homebuyers,” said Vishal Poddar, tax consultant and Head Indirect Tax-Training at Edukating.

While there is no GST on properties with occupation certificates (OCs), those without OCs and under construction are charged at 1 percent in the case of affordable housing and 5 percent in other cases. Those houses priced under Rs 45 lakh or having area under 60 sq m in metro cities and 90 sq m in non-metro cities come under the affordable category, Poddar explained.

Ravi Tanwar is looking forward to move into his 3-BHK flat in Greater Noida in Uttar Pradesh next year. Since the project is under construction, he pre-booked the flat, which burned a hole in his pocket as he would be paying 5 percent GST as well as stamp duty. Had it been a ready-to-move-in unit, Tanwar wouldn’t have had to pay the GST.

In May 2019, the government had given builders a one-time option to choose between the old GST rate (12 percent) with ITC or the new, lower GST (1 or 5 percent) sans ITC for the projects launched before 2019.

Amit Saxena (name changed) invested in an under-construction property from a leading developer and had to pay GST at 12 percent as the developer had opted for the old tax regime. The project was launched before 2019.

Vipin Kumar (name changed), who bought a flat in resale in Sector 129 in Noida, a Delhi suburb, said that he had to pay multiple charges like 18 percent GST each on transfer charges, club charges and maintenance advance.

Then, there has been ambiguity over the GST rate the developer should charge for infrastructure development fees.

“If any additional charges are levied by the builder which eventually adds to the value of the property, then the rate of the flat applies to these charges be it infrastructure development charges, provision of electricity and water or society formation charges,” said Poddar.

Tanwar said that the central government should help homebuyers by bringing under-construction property in same GST bracket as a ready-to-move-in one.

Santosh Dalvi, partner and deputy head of indirect taxes, KPMG India, said the government has already rationalised the tax by bringing it down to 5 percent.

The GST Council at its 47th meeting held on June 28-29 clarified many issues where there was a dispute related to tax slab rates.

“There have been ambiguities with regard to preferential location charges as levied by the builders. There was a dispute whether this should be charged at normal flat rate or as a special consideration taxable to other rates. Now the GST Council has clarified that it should be treated at consideration of the flat. So, now it will automatically come in the 1 percent or 5 percent criteria,” explained Poddar.

In relation to developed plots, Gujarat Authority for Ruling (GAAR) in the matter of Dipesh Anil Kumar Naik 2020, treated it as a taxable supply while the Goa Authority for Advance Ruling (in case of Shantilal Real Estate Services) did not consider it as supply, hence not taxable. The council has clarified that if a land developer undertakes development of any plots with basic amenities like drainage, roads, etc, then sale of such plotted land won’t be taxable. The council also clarified that sewage water treatment would attract no GST and the council has omitted the word ‘purified’ to clear the cloud around it.

GST: With and without ITC

Under the GST regime before 2019, the rate for the real estate sector was 12 per cent with ITC. Developers were allowed to collect tax from the customer and set off his taxes on purchases and works contracts paid to his vendor, thus effectively reducing his cost of construction to the extent of input tax available. Then came the composite scheme in 2019.

“Under composition scheme, a developer can collect tax at a compounded rate, but he cannot avail input credit on his purchases, which results in tax cascading, i.e., tax on tax. This, in turn, leads to an increase in the cost of construction to the extent of tax paid on purchases. The increase in input cost due to tax cascading is 28 percent on the cement portion of the construction cost, 18 percent on steel, 18 percent on the entire cost of services portion of construction cost,” said V. Sivakumar, CFO, Columbia Pacific Communities, a Bengaluru-based provider of serviced homes for senior citizens. 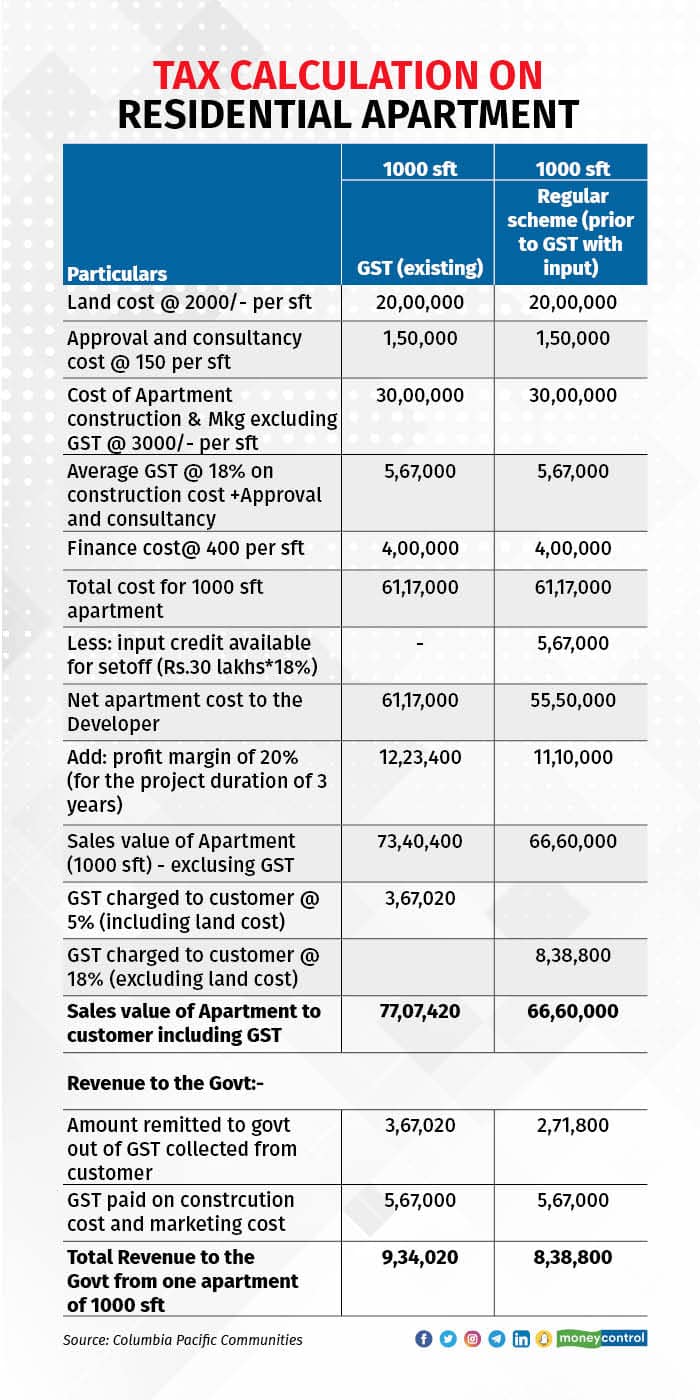 The impact of the reduction of GST from 12 percent to 5 percent is more significant on the luxury housing segment, said Abhishek Kapoor, CEO, Puravankara Ltd.

For example, a property worth Rs 70 lakh under the old regime at 12 percent helped the government collect Rs 8.4 lakh. Under the new regime, at 5 percent, the same property gave Rs 9.98 lakh to the government. (Please see table) However, in the case of a property worth Rs 2.5 crore, the collection of Rs 30 lakh (12 percent) under the old regime reduced to Rs 19.7 lakh (5 percent) under the new regime, explained Kapoor. Key issues with the current GST system for real estate

Prashant Chopra, chairman of PS Group, a Kolkata-based developer, said the GST Council should rationalise rates on the real estate sector considering the availability of ITC for residential properties.

“Though it appears that the current GST rates represent significant savings for the end user, this is not entirely true. In fact, there is an increased GST outflow for the consumer when these GST rates are applied on the revised property prices that have resulted from the increased construction costs due to restrictions on ITC,” said Chopra.

Another issue is that currently, GST is levied on the sale of under-construction units wherein the entire value of the unit (including value of underlying land) is taxed after giving ad-hoc deduction of one-third of the value of the unit towards land irrespective of the actual value of land.

“This deemed restriction of land cost has, however, been held ultra vires the valuation provision in Munjaal Manishbhai Bhatt Vs Union of India (Gujarat High Court) case,” said Sivakumar of Columbia Pacific Communities.

Also Read: Four Years of GST: Charting the Road Ahead for the Real Estate Sector

Realtors say that the government should allow developers to go back to the old regular scheme, in which the GST rate was 18 percent excluding land cost or 12 percent including land cost with full input credit available as a setoff to the developer, and that the present compounded scheme may be given as an option.

Rohit Gera, managing director of Pune-based builders Gera Developments, said that the real estate sector is reeling under tremendous inflation of materials and restoration of the ITC for homes under construction will provide some amount of relief as well as help absorb some of the inflation.

Kapoor of Puravankara suggested the restoration of ITC with an increase in the GST rate from 5 percent to 8 percent. “As against the earlier rate of 12 percent GST charged on sale value, we propose that the government should collect 8 percent as GST now instead of today’s 5 percent but allow input tax credit. Allowing input tax credit protects the downside for the mid-income housing segment,” he said.
Akash Sinha
Tags: #developers #GST #Real Estate
first published: Jul 2, 2022 07:47 am