As many as 69 percent of hospital beds in India are concentrated in urban areas; Pune outranks other cities on health parameters

The Delhi-National Capital Region, which covers the national capital, Gurugram, Faridabad, Noida, Greater Noida and Ghaziabad, was ranked the lowest in the list, primarily because of the region’s poor scores on air and water quality, sanitation and performance of municipal bodies.

Hyderabad, Chennai and Kolkata occupy the fifth, sixth and seventh positions, respectively, the report titled State of Healthcare in India – Indian cities through the lens of healthcare has said.

Each parameter is assigned a substantial weight depending upon the criticality of the parameter. The final arrived scores are used to determine the rank of the city. 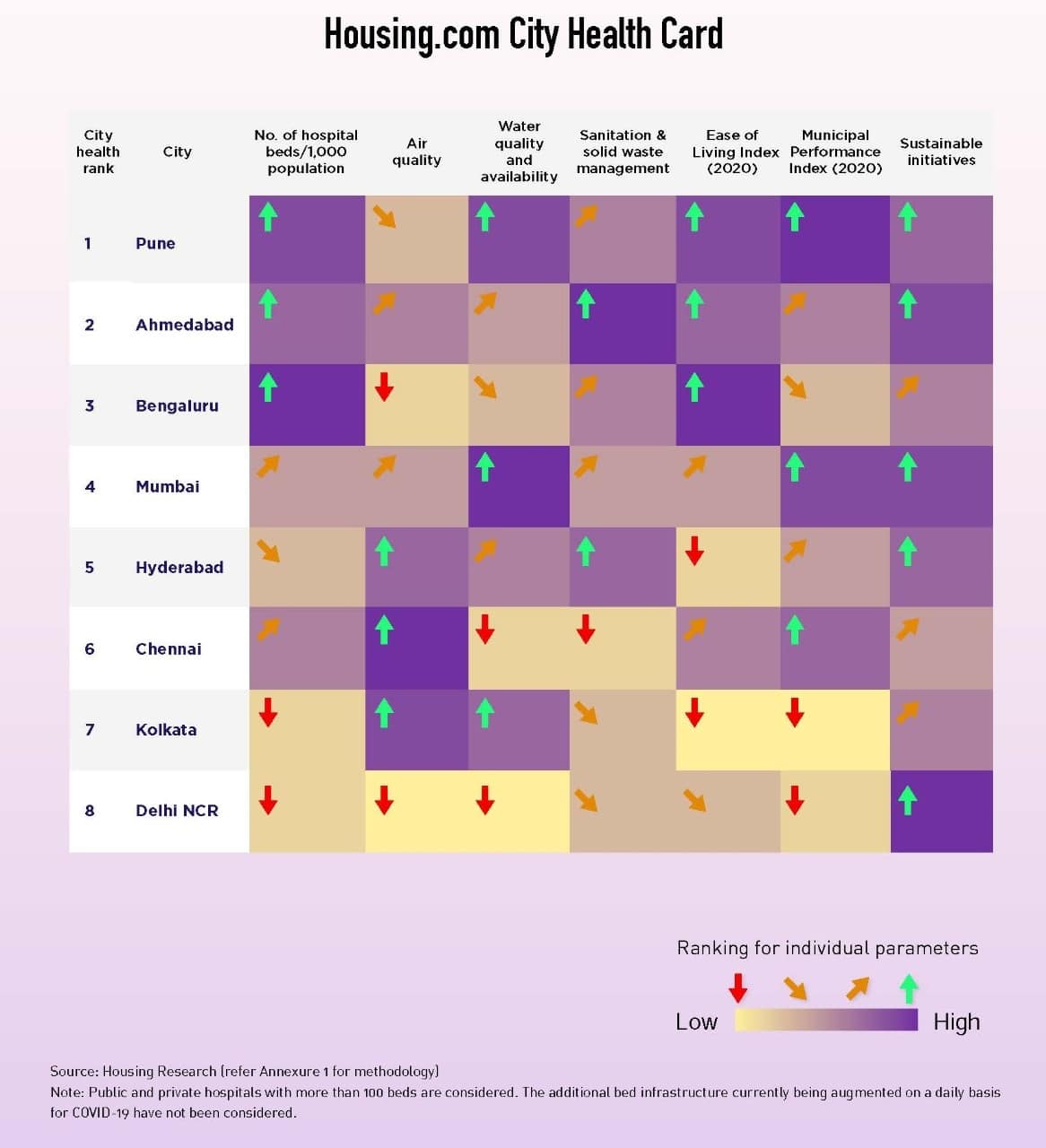 It states that in the public healthcare system, there is only half a bed and 1.4 beds available, if we count public plus private hospital beds available per 1,000 people in India.

The healthcare services in India face a shortfall of 3.5 million hospital beds in terms of public hospitals. The shortfall is reduced to 2.4 million beds with the inclusion of private hospitals.

The southern states of Karnataka, Telangana and Kerala have the maximum number of beds per 1,000 population (of public and private hospitals). On the other hand, states such as Bihar, Odisha, Chhattisgarh and Jharkhand lag behind and rank the lowest in hospital beds, it said.

Whereas in terms of quality, delivery of services and health outcomes, Kerala, Andhra Pradesh, and Maharashtra top the NITI Aayog’s National Health Index (2019), the report said.

The report provides a perspective on nations’ preparedness in terms of providing health services to its people, also states that India is among the countries with the least public health spending and high out-of-pocket expenditure.

According to the report, India spent only 3.5% of its GDP on healthcare in 2018, as compared to developed countries like the US, the UK, Japan, Germany, and Canada which spent nearly 10–18% of their GDP on healthcare. This spending includes both the public healthcare spending and out-of-pocket expenses.

"It is a matter of great concern that despite an impressive economic growth trajectory and healthcare initiatives, India continues to underperform compared to other countries," the report said.

“India, which is the third-largest economy in Asia, needs to significantly increase its spending on healthcare. This has been made eminently clear as the country is currently struggling to keep its people safe from the ongoing second wave of the coronavirus pandemic. As the second most populous country in the world with over 1.3 billion people, India also has to focus on building quality healthcare infrastructure and economically develop itself in such a way that its overall infrastructure is preventive against health risks. Here, one is also forced to acknowledge how crucial quality housing is, in reducing health risks,” said Mani Rangarajan, Group COO, Housing.com, Makaan.com and PropTiger.com.

In response to the growing number of residents and global tech companies, many leading private hospital services have come up in Pune. Not only this, but the city is also becoming a hub for health tech startups due to the presence of a talent pool from high-quality medical and engineering institutes.

Having said that, however, the city still struggles with public healthcare delivery, as is highlighted by the fact that Pune is one of the cities with high COVID-19 caseload.

Currently, the city’s healthcare facilities are concentrated in central areas and eastern areas. Although, the northern regions, such as the IT hub of Hinjewadi and Ravet, see significant residential traction, very few hospitals are located here.

Ahmedabad, the largest city of Gujarat, is ranked number 2. The city has seen significant economic growth in the last decade, due to the thriving textile, manufacturing, and chemical and petrochemicals industries.

With its focus on inclusive and sustainable development, the city is taking strides in initiatives related to transport, solid waste management and sanitation. Ahmedabad stood at the third position in the ‘Ease of Living Index 2020’.

Currently, the commercial development is also concentrated in the western region, while industrial areas are mainly located in the eastern side.

In line with this, the density of hospitals is more in the western and central suburbs compared to other regions. The city has nearly 3.2 hospital beds per 1,000 people. However, albeit sparse, the healthcare services have also come up in other localities such as Chandkheda, Nava Naroda and Vatva, which are also prominent residential hubs.

Bengaluru, colloquially known as India’s IT capital, is ranked number 3 and has the highest number of beds (3.6) per 1,000 population among the metros, aligning with the overall scenario of the state of Karnataka having the maximum number of beds vis-à-vis the state’s population.

Over the years, the city has attracted a large-scale white collar migrant population with high spending propensity, leading to many prominent private healthcare providers setting up hospitals with world-class services. The city has also developed into a medical tourism hub due to robust international connectivity.

Although the city has recently topped the charts in the Ease of Living Index (2020), the burgeoning population, over the years, has led to significant pressure on the water supply, environment, and transport infrastructure of the city.

India’s financial capital Mumbai and its metropolitan region--- also the largest residential real estate market in the country with a transactional value of $2.5 billion in the first quarter of 2021  were ranked fourth on the Housing.com City Health Card, with parameters such as the number of beds, air quality, and liveability pulling its overall score down. The increasing population, lack of space and high capital values in the mainland of Mumbai has seen the residential activity move towards the suburbs of Thane, Navi Mumbai, Kalyan-Dombivli.

However, the public healthcare services have not been able to keep up with the changing demographics, which are still primarily concentrated in the central business district areas of Mumbai.To cater to the demand of people residing in suburbs, many small private hospitals and allied services have mushroomed over the years. Also, these suburbs have seen large healthcare companies setting up their multispecialty hospitals in response to the demand, the report said.

Hyderabad, which has a low number of hospital beds, was ranked fifth, although the city fared well in air quality, sanitation and solid waste management. In terms of healthcare, most of the city's health infrastructure follows the residential footprints, with prominent services concentrated in the western and central suburbs.

Although the city fares better than other metros in terms of air quality, sanitation and waste management, however, the rapid influx of population has added stress over the water supply, with demand exceeding the supply leading to water shortage, the report said.

Chennai scored lower due to poor quality of water and inadequate water supply, as well as poor sanitation and solid waste management. However, it is to be noted that Chennai currently has nearly three beds per 1,000 people, well above the national average of 1.4 beds.

Over the years, Chennai has seen significant growth in the automobile and service sector, especially IT, amassing the working population from all over the country. It is also base for many prominent healthcare service providers and coupled with international connectivity; the city has become a desired place for medical tourism.

Currently, most of the hospitals are located in the eastern suburbs. However, southern and western suburbs with dynamic IT, commercial and residential activity still fall short when it comes to multispecialty and super specialty healthcare services, the report said.

Kolkata lags in terms of delivery of healthcare services, sanitation and solid waste management compared to other cities putting it in the seventh spot. The city, which currently has a population of 15.7 million, has two beds per 1,000 people and requires an upgrade to cater to the growing population, estimated to reach 17 million by 2030.

The hospital services are currently located in the central, eastern and southern areas of the city. The planned satellite areas of New Town and Salt Lake City in the east and upcoming IT hubs of Behala and Joka in the south also see maximum commercial and residential activity. However, no major healthcare services are currently located in the western and northern areas of the city.

Delhi (NCT & NCR) is ranked the lowest among the top eight cities of India as per our City Health Card due to factors such as deteriorating air quality, water supply, and poor solid waste management and sanitation.

The density of hospitals is lower in the Ghaziabad and Greater Noida regions compared to Gurugram, Noida and Faridabad which also have higher levels of service sectors, warehousing and manufacturing activity. Even in Gurugram, Faridabad and Noida, the healthcare services mainly belong to the private sector, as public healthcare remains a straggler.

In terms of residential market, all the cities of Delhi NCR, except Faridabad, hold almost equivalent volume of units, the report added.