Inflation is bad news for homebuyers. But there is a way out of this pain

Those who had taken a home loan as far back as 2015 or 2016 would have benefited from falling interest rates. But those who bought properties—and took loans to refinance them—when interest rates had bottomed out during the Covid-19 lockdowns will feel the pinch

If you’re a homeowner, you would have gleaned from the news that hardening inflation has just made your home loan interest go up. High inflation prompted the Reserve Bank of India (RBI) to increase interest rates for the first time since 2018. More rate hikes may follow through 2022. With each hike, your loan rates rise. Not a good situation for borrowers with floating rate loans.

The situation could be particularly damaging to new homeowners. They had the benefit of borrowing at rock-bottom rates in recent years. They had planned their loan payments a certain way. For example, a 30-year-old individual may have taken a 20-year loan hoping to be out of debt by 50. But if interest rates continue to rise, that loan may extend to their 60s. This could jeopardise their financial goals such as saving for retirement.

Things are relatively easier for older borrowers. Let’s say you had taken a home loan in May 2016 when the rates were around 9.5 percent. Since then, the falling rates would have allowed you to accelerate your payments. You may have even refinanced to a rate as low as 6.5 percent in recent months. Your loan tenor would have shrunk considerably. Even as rates start climbing towards 8 percent now, you’re still better off than you were in 2016. 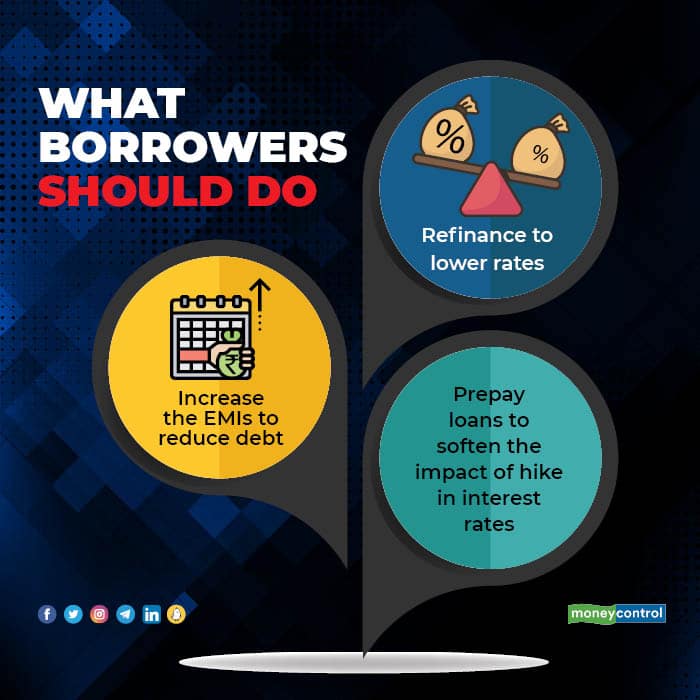 But for anyone borrowing at rock-bottom rates, it’s going to be tougher. Their loan tenors are going to increase. If the rate hikes are substantial, their tenors could increase exponentially. Let’s say you borrowed at 6.7 percent last May for 20 years. You’ve paid 13 EMIs or equated monthly instalments. From June 2022, your rate resets to 7.1 percent. You had brought your tenor down from 240 months to 227. But this single rate hike will now increase your tenor to 243 months. You’re now going to be in debt nearly a year and a half longer.

Subsequent rate hikes would extract additional costs. Experts say there could be a 200 basis point increase over the next two years. In a worst-case scenario where inflation spirals out of control, loan tenors could increase by over 100 EMIs.

This is theoretical. At some point, your EMI will have to increase, too. Your lender won’t go on increasing your tenor. Your amortisation schedule can only stretch to an age limit set by your lender. That’s the age by which you’re expected to close the loan. For instance, it could be 60 or 65.

So if the rates go on increasing, your lender will hike your EMIs factoring in the years left before you hit the age limit.

Either way, extreme inflation will be bad news for new borrowers who’ve taken their loans at low rates. Therefore, they cannot afford to have a passive approach to their payments. They need to get a copy of the amortisation schedule, find an EMI calculator, and start calculating how they can pay off their home loans on time.

In a scenario where rate hikes remain benign—let’s say, within 100 basis points—new borrowers won’t have a lot to worry about. Here’s a simple approach they can take to getting out of debt fast. We call it the 5 percent reducing balance method. Assuming a constant average interest rate, you can pay off a 20-year loan in around 12 years by prepaying 5 percent of the loan balance once every loan year.

We recommend 5 percent because this ensures nearly two-thirds of your loan is paid off with your EMIs. It makes your EMI payments more effective. This is ideal. The rest comes through prepayments. Five percent is not too big a payment and better than not prepaying at all. It allows you to prepay slowly and leaves you money to invest for goals such as saving for retirement and educating your children.

Investment goals are critical to your finances, too. Therefore, prepaying just 5 percent leaves you with more money to invest, especially as your income grows. You grow wealthier as you invest.

You also get out of debt faster as you prepay.

The second systematic way to prepay is by voluntarily increasing your EMIs. The EMI you pay over and above your regular EMI acts as a prepayment. For example, your EMI is Rs. 25,000 and you decide to pay Rs 35,000, the additional Rs 10,000 is adjusted against the principal. This accelerates your loan payment each month. You can step up your EMIs in line with your income hikes and get out of debt faster.

If you’re paying a substantially higher rate than the market rates you may be eligible for, it’s time to refinance. You could ask your own lender to do it. You’ll need to pay a processing fee. If your lender isn’t giving you an attractive deal, consider a balance transfer. This will involve higher costs and a bit of paperwork. But if you get a rate more than 50 basis points lower than the current one, it may be worth doing. It makes most sense when more than half your loan is left.

Ideally, consider a combination of these three methods. That would give you a lower rate through refinancing, reducing interest through stepped-up EMIs, and money to invest for wealth creation through the 5 percent reducing balance method.

If inflation spirals upwards, a systematic prepayment method will have limited impact. You’ll need to take a more aggressive route. Apart from the methods above which help reduce your debt slowly, consider a strategic attack on your loan to keep the interest from ballooning.

Let’s call it the surgical strike method. The plan? To pay off the loan in its intended timeframe.

The plan here is to bring the loan tenor back to 226 at the end of June. This is achieved through a single, strategic prepayment of Rs 1.75 lakh in June. After the payment alongside your EMI, the tenor reverts to 226 months by July. Every time there’s a rate hike, you could repeat this step.

This keeps your payments aligned with the timeframe in which you want to close the loan. It will not balloon out of control in an adverse inflation scenario. In fact, whenever the cycle reverses and rates start falling again, you’ll be positioned strongly to benefit from accelerated payments.

Prepay aggressively if rates start nudging double digits. At this point, the loan wouldn’t be worth the pain. You’re better off without it. You could go for the nuclear option: pre-close the loan if your finances allow it.

In summary, new borrowers need a hands-on approach to their loans. It may not be enough to simply pay EMIs. Hard inflation is destructive. Only regular intervention through prepayments will ease the burn.