Explained in charts: How debt funds dealt with credit risks in 2020

The Franklin Templeton crisis spelled doom for low-rated bonds. But fund managers believe that the worst is over for credit risk funds

It has been a tough couple of years for debt funds, ever since the Infrastructure & Leasing Finance Corporation (IL&FS) crisis triggered a wave of bond defaults in 2018 and later.

What did debt funds learn and how did they cope in 2020? Through five charts, Moneycontrol tells you the tale of the painful lesson debt funds learnt from the credit crisis. But the big question is: Are debt funds out of the woods yet?

COVID-19 worsened the situation matters as many companies defaulted on their interest and principal payments to their lenders – including mutual funds. But debt funds were also part of the blame as many them took credit risks in the months and years leading up to the IL&FS blow-up. The defaulting companies included DHFL, Essel Group, Altico Capital and Reliance ADAG, as securities were downgraded.

In March 2020, the Reserve Bank of India (RBI) wrote down the AT1 bonds of YES Bank. And then, in April 2020, Franklin Templeton decided to wind up six debt mutual fund schemes.

Debt funds cut their investments in lower-rated bonds (those rated AA & Below) by half in 2020, as per data compiled from ACEMF. “Debt funds largely invested in bonds issued by public-sector firms, banks and government securities (g-sec) in 2020,” says Deepak Jasani, Head of Retail Research, HDFC securities.

Investments in government securities rose to 26 percent as of December 2020 compared to 17 percent a year earlier. Jasani adds that wherever debt funds could sell lower-rated bonds, they did so and reinvested the proceeds in g-secs. Falling interest rates helped g-sec investments as prices increased (the inverse relationship between interest rates and bond prices at play here).

Simply put, spread is difference between the yields of corporate bonds and G-secs with the same maturity. As G-secs are considered risk-free due to their being backed by the government, the spread can be used to determine the riskiness of a corporate bond. During uncertainties, people sell corporate bonds more, which would in turn lower the prices of the securities. This pushed the yields up and spreads increased. 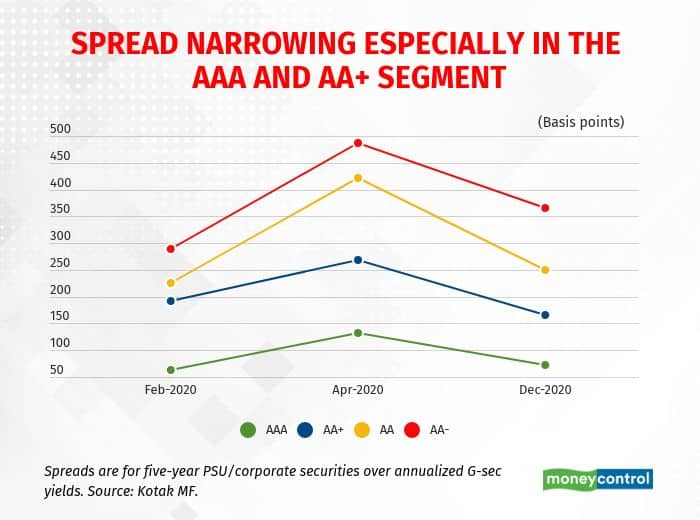 The pace of selling low-rated securities accelerated after Franklin Templeton AMC decided to wind up its schemes. Investors switched from credit risk schemes to those that invested in good-quality securities. “As a result, credit spreads for AA-rated assets widened to multi-year highs, while credit spreads for AAA-rated bonds compressed to multi-year low,” Dalal says.

This helped funds that invest maximum in AAA rated papers like corporate bond funds to generate higher returns. Meanwhile, the return was relatively lower in the funds that allocated to lower rated bonds in 2020.

Last year saw a sizeable shift in the exposure from lower-rated papers to the highest-rated securities, including to g-secs among AMCs. Is the worst over for credit risk funds?

Dalal says that due to RBI measures taken last year to infuse liquidity, yields of non-AAA rated bonds began to fall towards the end of 2020. He adds that AA-rated securities can possibly outperform AAA-rated bonds in CY21.

Lakshmi of Kotak MF believes that the worst is behind us. She believes that spreads of AA-rated securities can fall and this could mean reasonably good returns from debt funds that invest in them. Improving corporate health would also help debt securities issued by them.

Despite the optimism, Moneycontrol recommends staying invested in debt funds that invest in good quality securities. Invest in credit risk funds only if you can stomach the volatility and, in the worst case, a loss of capital, which may accompany them.
Dhuraivel Gunasekaran
TAGS: #debt funds #invest #Mutual Funds
first published: Jan 25, 2021 09:19 am