Bullets to Budgets: A retired colonel who learnt from his mistakes and now helps defence personnel with financial planning

Sanjeev Govila is a retired colonel who studied financial and investment planning and now runs a firm called Hum Fauji Initiatives that exclusively helps the armed forces in financial planning.

After having spent three decades in the armed forces, New Delhi-based Col. Sanjeev Govila took voluntary retirement in April 2010. He was 47 years old when he called it a day. But he was not done yet.

During his years in service, he observed that the singular focus of many armed forces personnel, like him, was to serve the nation – there was little time for financial planning.

Govila, now 59, always had a knack for finance. He recollects how many peers would come to him for financial advice. Over time, Govila's confidence in disseminating personal finance knowledge grew.

Two years before retirement, Govila decided he wanted to become a financial advisor, but exclusively for armed forces personnel. He attended weekend classes when he was posted in New Delhi. Number-crunching came easy to him and he cleared his Certified Financial Planner course with flying colours.

What also motivated Govila were some of his own experiences and observations. It’s difficult for army men and women to manage their money. Frequent transfers and sudden calls to duty meant letting go of investment opportunities. Lack of knowledge and inadequate reading meant financial ignorance and that left personnel vulnerable to mis-selling.

In his day, physical documentation was required at every step. Being posted in remote areas meant investment decisions used to get neglected and sometimes signatures couldn't be collected on time.

Today, he says, everyone has mobile phones and email. Soldiers at Siachen Glacier base camp can make financial decisions over the phone. Govila says he recently communicated with a client who was at a remote army post in Manipur, overlooking Myanmar.

Govila himself had made some terrible financial mistakes and the stories of other jawans and armed forces personnel were quite the same.

In 2010, after his retirement, Govila began drawing up financial plans for people in the armed forces. That wasn't enough. The feedback he got from clients was: Where should one go to make the actual investment?

That was when he got a mutual fund distributor licence and established his firm, Hum Fauji Financial Services. Later, he registered with the Securities and Exchange Board of India as an investment advisor.

Hum Fauji Financial Services is now a 45-employee strong firm with about 3,300 clients spread across India and the world. The firm has about Rs 870 crore of assets under management.

“In India, we see that women aren’t generally interested in personal finances. When calamity strikes by way of their spouse’s demise, there is an army of unscrupulous elements intending to take whatever they may have. That is why we never refuse any widows when they walk through our door seeking financial advice,” says Govila.

In a conversation with Moneycontrol, Govila discusses what financial freedom means to him, his financial journey, the lessons learnt, and how he spreads financial literacy through the firm that he co-started with his wife Bindu Govila. Edited excerpts:

What could ‘financial freedom’ be in the context of the armed forces?

Having the right amount of money at the right time, when you need it. I strongly believe that financial freedom comes from financial, not physical, assets. You can easily liquidate financial assets when your financial goals come closer and you need that cash.

The armed forces have very little exposure to the world outside defence and combat. Due to this, many investment decisions that they take are sudden and lack awareness and understanding. For example, they may not know the education avenues open for their children. Many, therefore, don't plan for their children's education adequately.

If people in the armed forces want to become truly financially independent, then they must do goal-based planning. Sadly, there is very little awareness about it. If they plan for the goals well, there is bound to be a sufficient amount of money, given their fair pay scales now, by the time they leave the forces. 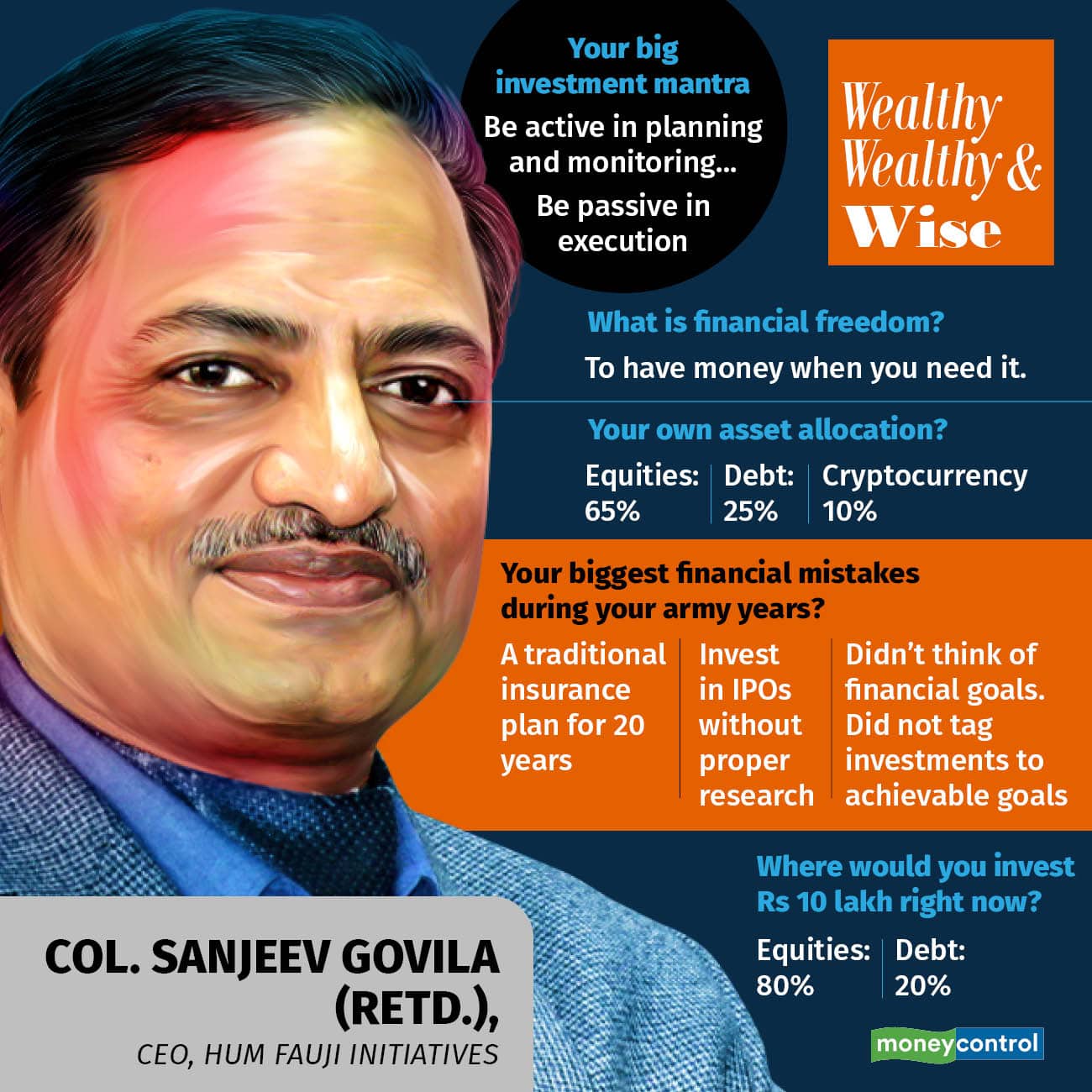 What were your biggest challenges in managing money when you were in the armed forces?

Transfers were very frequent at the young age when I had joined the army. I’ve been posted to places where an entire week's newspapers would all come together, if at all. It was not the internet era, so there was no continuity in financial news and advice. All financial decisions were literally taken in a vacuum, based on outdated inputs.

Frequent transfers meant that we would lose touch with our financial planning, if we ever had one.

People in the armed forces do not usually discuss personal finances with their seniors. Consequently, nobody was guiding us through important financial decisions. Even important decisions were taken more on hearsay and whims than knowledge and analysis.

What were your biggest financial mistakes and what were the lessons learnt?

My first big mistake: I had combined insurance with investment. An insurance agent mis-sold me an insurance policy that he claimed would give 12 percent annual returns. After 20 years, when I did my own calculations, I realised that I had only earned 3 percent. I was shocked.

My big lesson from this episode: If you are not financially savvy, your money will go to dust in no time.

My second mistake: I followed my parents’ investment pattern. I did not bother to check if that suited me. My father used to directly buy equity shares. Therefore, I too started to buy shares. Unknowingly, therefore, I invested without proper research in a lot of initial public offers (IPOs), which turned dud within a couple of years of listing.

My third mistake: Investing without goals. At that time, I only knew that I wanted to grow my money. But I never really thought about why I was saving. So, whenever I needed any money, I would either withdraw from my provident fund or sell equities. There was no thought process; withdrawals were random. Later, I realised that until I set financial goals, impulsive withdrawals will not allow my wealth to grow.

Where do you invest your money now?

Although I have real estate investments, I intend to sell them and retain just the one house where we live.