172@29@17@102!~!172@29@0@53!~!|news|business|personal-finance|applying-for-a-home-loan-or-personal-loan-stay-away-from-the-flat-interest-rate-trap-to-save-money-3218381.html!~!news|moneycontrol|com!~!|controller|infinite_scroll_article.php!~!is_mobile=false
Watch experts decode 'The rise of ESG investing' on October 29 at 4pm. Register Now!
you are here: HomeNewsBusinessPersonal Finance

Applying for a home loan? Stay away from the flat interest rate trap to save money

A flat interest rate is a gimmick by lenders to lure customers into taking a loan without actually allowing them to understand what the entire scheme is all about.

There are banks, NBFCs and online lenders who promote easy and quick loans on flat interest rates. These flat interest rates have been used as a marketing tool by lenders for enticing a customer by quoting low-interest rates and mislead them into taking a high-cost loan. With such interest loans borrowers fall into a debt trap.

This fact is not known to customers in general, who perceive that they are availing a lower interest rate while they are doing just the opposite. 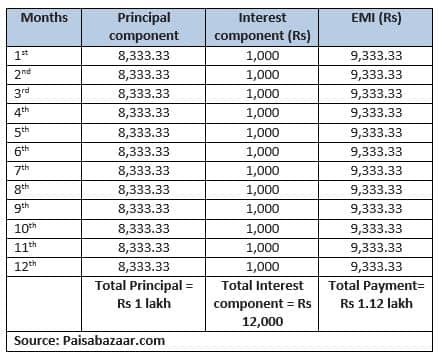 Naveen Kukreja, CEO and Co-founder of Paisabazaar.com said, “Reducing interest rate method is better from the customer’s perspective as the interest cost in the loan availed in the reducing balance method is significantly lower than the loans availed at a flat rate.”

Gaurav Gupta, Co-founder and CEO, MyLoanCare.in added, “From the perspective of being transparent, reducing rates are always better as they reflect the accurate rate and interest to the borrower. Flat rates can be highly misleading especially if quoted on EMI loans that are the most popular loans nowadays.”

Illustration: If a loan of Rs 1 lakh was taken for a period of 3 years at a flat rate of 10%, repayable in monthly installments, you pay an EMI of Rs 3611 and your effective interest rate calculated is 17.92%. In this situation, the borrower is easily fooled by taking a high cost loan, wrongly believing it to be a 10% loan.

There are indeed some major drawbacks as far as the flat interest rate method is concerned. Amit Prakash Singh, Principal Partner-Mortgages, Square Yards said, “The cost of the loan is much higher than a reducing interest rate loan, interest on the entire loan amount and the outstanding loan amount does not go down.”

Lastly, borrowers do not get the benefits of a reduction in interest rates based on market conditions and have to keep paying the same EMI throughout the tenure.

Kunal Varma, Chief Business Officer & Co-founder, MoneyTap said, “A flat interest rate is a gimmick by lenders to lure customers into taking a loan without actually allowing them to understand what the entire scheme is all about.” Consumers who are usually in urgent need of money fall for it and end up paying higher amounts as interest. It’s a trap indeed!

What borrowers should do?

Always ask the lender about the interest rate calculation method before taking a final decision to borrow. Singh added, “You can also spend a little time in the calculation of the total interest payable by multiplying their EMIs by the number of monthly installments and then deducting the principal amount from this sum. This will help compare loan offerings based on rates of interest and calculation methods.”

Also, always take into account upfront costs like processing fees when you are comparing loans from lenders.