Selected Articles from
Financial Times on Moneycontrol Pro
Webinar :Register now for webinar on 'Trade BankNifty in just 15 minutes a day' - By Asmita Patel
you are here: HomeNewsBusinessPersonal Finance

All you need to know about loans against insurance policies

If you default, the insurance company would simply foreclose your policy and recover its dues

Your LIC policy can do more than just give you an insurance cover. It can be used to raise loans.

The rates at which loans can be taken have been revised early May 2020.

Loans against the policy ‘Jeevan Shikhar’ are available at the lowest rate of 9 per cent. On all other regular premium endowment plans and money-back policies launched after April 1, 2019, loans would come with a 9.5 per cent interest.

“The revised rate will be applicable on the new loans being availed by policyholders and there will be no change in respect of existing loans,” clarifies LIC.

As per the last Annual Report of the company, Rs 1.14 lakh crore have been given out as loans in India, of which 99.98 per cent are given against non-linked policies or traditional policies as on March 31, 2019.

The interest rate offered on loans against insurance policies are lower, at 9-10 per cent, when compared with personal loans that come at a steep cost of 15-18 per cent and Credit Card debt, which costs you 36-52 per cent. 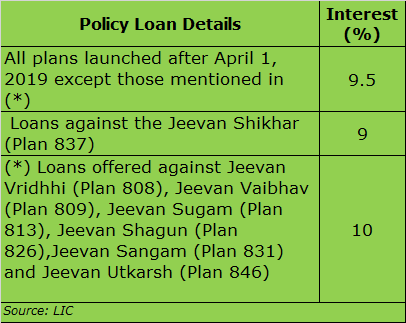 The best part is that the insurance behemoth doesn’t consider the credit worthiness or the CIBIL score as a parameter for offering this loan as it is an advance paid against the policy’s maturity proceeds. However, income proof and bank statements apart from the original policy documents are needed while requesting for a loan.

You can get a loan for up to 90 per cent of the surrender value of a policy, if the premium has been paid for three consecutive years, without any break. Also, these loans are available only for endowment, whole life and money-back policyholders and not for term plans or ULIP customers.

“A policy acquires a wholesome surrender value only after 10-12 years. So, during the early years of a policy, you would hardly be able to apply for a sufficient loan amount,” suggests certified financial planner Pankaaj Maalde.

LIC offers loans against its policies for a minimum period of six months. Firms such as ICICI Prudential Life Insurance, HDFC Life, and Edelweiss Tokio Life too offer loans directly to their traditional insurance policyholders. You also have the option of taking a loan from any bank against the insurance policies, but the interest rate would differ.

“The life insurer or the bank offering a loan against an insurance policy was ask for partial or full assignment of the policy” says Vivek Damani, proprietor of financial advisory Jeevan Prabandhan

As branches in select regions would still be closed during the current lockdown, you can apply for loans against a policies by going online.

How is the interest paid?

While repaying the loan, you can either service the entire loan, including the principal, or merely pay the interest. The rest of the loan principal can be settled from the policy amount at maturity.

“You must always make sure you never miss the interest payment,” Maalde warns, indicating that the policy may be terminated if the total amount outstanding exceeds the surrender value.

If you take a loan against policies offering pension at regular intervals, then the interest would be deducted from the amount that is paid as pension or annuity. Varishtha Pension Bima Yojana (T-828), Pradhan Mantri Vaya Vandana Yojana (T–842) and Jeevan Shanti (T-850) are some such examples.

The loans taken against insurance policies will not qualify for the moratorium that borrowers were given recently by banks to tide over the COVID-19 crisis.

Loans against insurance policies are merely advances against your policies. If you default, the insurance company would simply foreclose your policy and recover its dues.