Floating rate bonds have seen tepid demand in weekly auctions, which is why they have devolved on the primary dealers for three successive weeks of issuance

The Central government should cut down on issuances of floating rate bonds (FRB) in the second half of this financial year given the weak appetite for these notes from investors, bankers and money market experts told Moneycontrol on August 1.

FRBs do not have a fixed coupon rate, like most other bonds. Its interest rate fluctuates based on the benchmark the bond is drawn on, typically the repo rate.

FRBs have seen tepid demand in weekly auctions, resulting in them being devolved on the primary dealers who underwrite the government's bond sales. On July 29, the Reserve Bank of India (RBI) sold only Rs 2,260.45 crore of the 2028 FRB at the auction, against the planned Rs 4,000 crore. The remaining Rs 1,739.55 crore devolved on the primary dealers. Devolvement means that the RBI could not find any buyers or was unwilling to sell at the high yields demanded by investors, mostly banks.

“Banks are facing heavy mark-to-market (MTM) losses by investing in FRBs, and the abundance of supply of these papers are making matters more difficult,” said a treasury official at a state-run bank, requesting anonymity.

“The bond market is demanding higher returns on FRBs and the RBI is in not favour of that,” the banker further said, adding that the market would get a breather if the supply of these bonds was reduced in the second half of FY23 instead of them being devolved repeatedly on primary dealers.

In economics, when supply exceeds demand, the price of a commodity/product falls. Due to high supply, the cut-off prices of FRBs have been lower over the weeks, resulting in losses for investors. The cut-off price set for the floater at an auction on January 14 was Rs 97.85. In an auction six months later, the cut-off was down to Rs 95.25, Rs 2.60 lower.

The government issued more than Rs 1 lakh crore worth of FRBs in FY22, far higher than it did in FY21. In fact, over the past five years, the issuance of floaters has increased 10-fold. However, during this period, the overall government borrowing also ballooned, partly led by fiscal measures to combat the pandemic-induced stress in the economy. New Delhi aims to borrow a record Rs 14. 3 lakh crore via bonds in FY23. The huge supply has fatigued the bond market. 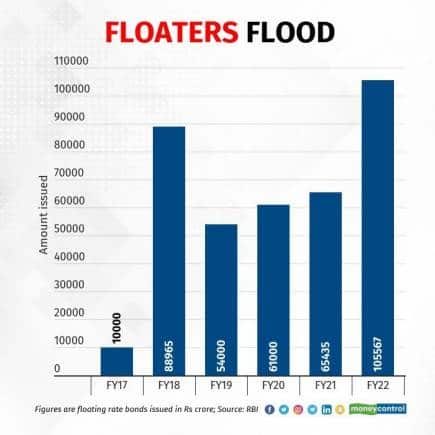 “Going by the current scenario, the government might cut down the issuances of these bonds in the second half, because of no takers and high volatility,” said Ankit Gupta, founder at Bonds India. “Cutting down on these issuances gives a chance of a fair yield signal and capacity for the market to absorb the excess supply of earlier issued bonds.”

Further, this might create a sense of liquidity and fair market pricing, which in turn could enthuse the bankers to take up these issuances on a later stage, based on their capacity to absorb the issuances, added Gupta.

Apart from the regular supply, experts pointed out that the inclusion of papers in debt switch auctions is also accentuating the supply pressure. A bond switch is a mechanism through which the government replaces existing shorter duration sovereign bonds with long-duration papers.

“The government should restrict the supply of FRBs, otherwise these relatively-illiquid papers will have to contend with tepid demand,” said Umesh Tulsyan, Managing Director at Sovereign Global. “The supply of FRBs needs to stabilise to prevent the rising spread and devolvement on primary dealers.”

The RBI-led Monetary Policy Committee (MPC) is expected to continue its rate-hike trajectory in the second half as well, exerting more upward pressure on bond yields. The bond market is pricing in the repo rate to be at 5.75 percent by December, up from 4.90 percent currently. This could mean that investors, specifically banks, could face further MTM losses on their portfolios, which could impact their treasury income. Already, a few banks have seen a dip in treasury income in the April-June quarter.

Typically, FRBs are preferred in a rising interest rate scenario because the coupons on these papers are adjusted every six months to capture the increase in interest rates. This means that the capital of the investor is safe from interest rate risks and can even give handsome returns.

“Ideally, in a rising interest rate scenario, FRB is a better source of investment. But the problem is that banks and mutual funds are overly invested already and are looking to get out at every opportunity to even out their portfolios,” said a treasury official at a private bank, who requested anonymity. “If the supply is not cut, we may continue to see frequent devolvement or even auction cancellations.”

According to Archita Joshi, fixed income advisor at Motilal Oswal, a shorter maturity FRB “does not make sense” even when interest rates climb. “If you exit early, the underlying swaps and reset dates may not entirely come into play by the time of your exit, preventing you from benefiting from the higher yield,” added Joshi.

Since the huge supply has already worsened the bond market, FRBs can be in demand only if the government cuts down on the supply, at least, for the second half of FY23, said Joshi.