Cut-off price for floating rate bonds have been progressively lower, resulting in losses for investors and a hit to sentiment.

Floating rate bonds, a seemingly sound hedge against interest rate risk for investors, have become a pain point and no one wants to touch them. The fear was visible at the auction of government bonds on Friday where the floating rate bond maturing in 2028 was devolved to primary dealers. Devolvement occurs when the demand for a bond is weak and the Reserve Bank of India (RBI) forces primary dealers to underwrite the issue.

“No one wants to take these bonds anymore. There is excess supply and the government has been issuing FRBs too many times this year. Today’s devolvement was a matter of time,” said a primary dealer, requesting anonymity.

Indeed, a seemingly sound investment strategy has turned awry for India’s bond investors, dealing a double blow to portfolios that have already taken a hit. Investments into floating rate bonds, done with the intention of hedging against interest rate hikes, have instead piled on mark-to-market losses for banks.

The government predominantly issues bonds with fixed coupons. Such bonds tend to pile up losses for investors during a rising interest rate cycle. That is because yields rise in tandem with rising interest rates which pushes prices down. Bond yields and prices move in opposite directions. The RBI’s policy rate hikes along with liquidity withdrawal measures over the past six months have sent bond yields surging by more than 100 basis points across tenures. This has meant that banks have taken on big trading losses on their portfolios. Rules dictate that banks have to mark their bonds held in their trading portfolios to the current market prices and adjust the resulting losses against their income, which are termed mark-to-market losses.

Bond market participants typically resort to investing in floating rate bonds during monetary policy tightening periods because the coupons on these papers are adjusted every six months to capture the increase in interest rates. This means that the capital of the investor is safe from interest rate risks and can even give handsome returns. Even if an investor chooses to sell a floater before maturity, there is little damage to the returns.

Then why are floaters bringing pain to the investors now?

The main reason is the large supply from the government. The government issued more than Rs 1 lakh crore worth of floaters in FY22, far higher than it did in FY21. In fact, over the past five years, the issuance of floaters has increased tenfold. Note that during this period, overall government borrowing has also ballooned, partly led by fiscal measures to combat the pandemic-induced stress in the economy. The huge supply has fatigued the bond market. The initial enthusiasm for floaters now seems to have waned and prices have taken a big hit. Enter mark-to-market losses on the instrument that was supposed to provide a hedge. 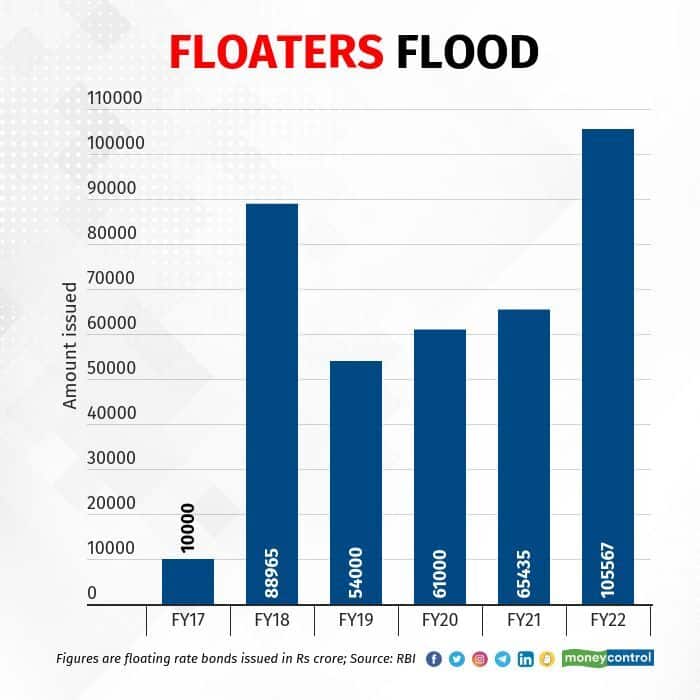 For instance, the government has frequently issued floaters maturing in 2024 and 2028 in 2022. The cut-off price set for the floater at an auction on January 14 was Rs 97.85. In an auction six months later, the cut-off was down to Rs 95.25, Rs 2.60 lower. In the secondary market, the price at which the floater was trading is even lower, according to traders.

Another flip side of floaters is that they are relatively illiquid compared with other fixed-rate government bonds. The lack of regular trading makes price discovery and exit hard. That said, bond traders believe that floaters do give a big advantage because they reduce volatility of the portfolio.

For now, they are giving investors an uncomfortable time.