People of India vs Franklin Templeton: For distressed mutual fund investors, courts are the best alternative

If SEBI is unable to protect the interest of investors by holding Franklin Templeton accountable, letting the courts settle the matter — despite the possible delay — may be their best option.

Franklin Templeton Mutual Fund is facing multiple litigation from investors across courts in India due to its decision to wind down six debt schemes. Writ petitions have been filed in Chennai, Delhi, Ahmedabad High Courts and also in the Supreme Court of India challenging the action of Franklin Templeton. Allegations abound of mismanagement and fraud.

On June 8, the Gujarat High Court thwarted the attempts of Franklin Templeton MF of launching an e-voting to wind up the schemes.  The company ergo suspended the e-voting, which was due to start today—June 9, 2020.

In the interlocutory order, the High Court extended the pause on e-voting until the forensic audit by markets regulator SEBI is completed to enable investors to make a considered decision.  In addition, the need of prior consent of unitholders has been laid down as a pre-requisite to the winding down of schemes. In the meantime, the various litigations will continue in courts with regard to the other issues stated.

Investors hung out to dry

Investors in these mutual fund schemes of Franklin Templeton are a harried lot. Their money is stuck in open-ended funds, which promised daily liquidity – especially investors in Franklin Ultra Short Bond Fund that was a parking vehicle for the very near-term financial goals of around one month or so. Now with the litigation, investors believe the process of getting their money back may be indefinitely delayed thus increasing the trauma for investors.

Franklin Templeton has argued that investors were aware of the credit risks and also other risks that they were taking in these funds. Investors invested in these funds fully knowing the risks and hence should take responsibility and bear this out.

This argument was placed by Franklin Templeton lawyers in the high court also and rejected by the Courts.  This is a malafide argument being put forward.

Investors may have taken a credit risk i.e. they may lose part of their principal due to credit default, however at no point of time had Franklin Templeton highlighted to investors or warned them that they can and will dis-honour the basic promise of an open-ended fund i.e. shut down these schemes and lock-in investor monies.  And the irony is that by doing the wind-down of schemes, it still does not reduce or eliminate the credit risk. Investors continue to take the same credit risk as earlier.

Four out of these six schemes have seen an erosion in NAV from the wind down date i.e. 23rd April 2020 till now (Table 1). The same portfolios which used to be in top quartiles are now in the bottom quartiles in terms of performance.

Table 1: Performance of the Franklin Templeton Schemes Being Wound Up 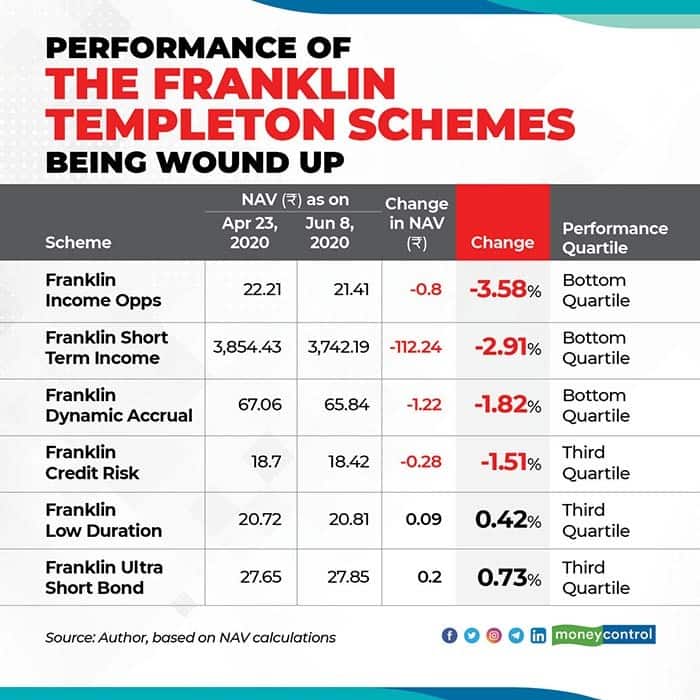 Without doubt, Franklin Templeton has been careful to follow the letter of the law — be it the portfolios or the winding down announcement, or the e-voting process and the voting options. On multiple occasions, Franklin Templeton has said that the winding down decision has been in consultation with SEBI and is the only possible method to protect the investor interests in these schemes.

The trouble with the voting process

But the High court has not accepted this argument that the due process of winding down has been followed. If one were to delve deeper, even the choices given by Franklin Templeton MF in the voting process can be questioned by an investor as falling foul of the spirit of law.

In the voting process as set out by the Trustees, an investor is first requested to give his consent for liquidation of the assets by choosing YES or NO.

If a majority of investors choose YES, then either they can choose Option A i.e. authorise the Trustees to oversee the liquidation or Option B – authorise someone other than the Trustees. This step of appointing someone else (Deloitte) i.e. Option B is to reflect the vote that the investors don’t have the confidence that the Trustees will be able to protect their interest.

Ironically in this case, the Option B of choosing Deloitte and that Deloitte has to only use Franklin Templeton AMC assisted by Kotak has been decided by the Trustees. This is contrary to entire hypothesis of Option B that the Trustees don’t have the confidence of investors and hence a third party has to not only oversee but also formulate what process has to be followed.

In a classical sense, this Voting here is just an illusion of choice – the decisions in all this is still being taken by the same entities whichever option one choses. So what’s the end-game here for an investor, since it is her money which is blocked and the persistent messages to her that she will be responsible for the delay of getting the money back, if she doesn’t vote YES or if she goes to courts.

Firstly, SEBI needs to evaluate whether the debt markets are still in a non-functional limbo or are they at near normal levels as AMFI (Association of Mutual Funds of India) has stated, is Franklin Templeton able to operate under the schemes under these conditions and then decide steps that will be in interest of investors.

If SEBI is unable to protect the interest of investors by assessing the conditions, putting a hard time-line and holding Franklin Templeton accountable, then letting courts decide the process—albeit with a bit of delay—may be the best option for investors.