Highlights
- India depends on China for chemicals across value chains
- China’s share in imports for broad categories range from 10-40%
- Rubber chemicals, graphite electrodes, carbon black, dyes manufacturers are likely beneficiaries
- The impact is complex because not only is China a competitor, but it is also a source of raw materials

The impact of the coronavirus epidemic in China on the chemicals sector could be far reaching, depending on the extent of epidemic reach, the period of plant shutdown in China and restrictions on shipments/logistics. We have been looking at two scenarios.

The first one is of an epidemic being reasonably restricted to cities, allowing manufacturing sites located outside densely populated centres to continue production. Such a scenario, though it will curtail consumption in China, may still keep the production of manufactured goods steady. This may mean higher exportable surplus than usual, raising the probability of higher dumping of goods into other countries.

The second scenario, which is more likely given the pre-emptive measures taken by Chinese government and the reports on the spread of the virus spread, is that China’s manufacturing economy is also going to be reasonably curtailed for some time. In chemicals, the impact would be felt across the value chain – from key basic chemicals to various value added chemicals having applications for a large number of end-markets. Given this context, we attempt to look at a few chemical value chains in this two part series to understand the impact of the epidemic. 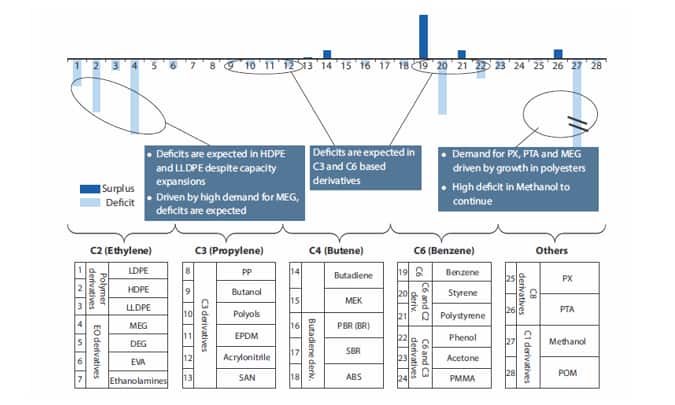 Rubber chemicals: China accounts for about 70 percent of the world’s rubber chemical production, but it only consumes about 33-35 percent of it. The rest is exported, which could be a worry for Indian rubber chemical players such as NOCIL, as exports are likely to increase as the epidemic curbs consumption in China. Higher imports from China, particularly after discontinuation of antidumping duty on rubber chemicals in July 2019 along with the weak domestic end market (Autos, Tyres) in India, impacted both product price realization and volume growth in recent quarters for domestic rubber chemical companies.

Interestingly, NOCIL has recently completed its mega capex project for antioxidants and accelerators at Dahej.  This includes capacity addition for accelerator - TBBS–( N- tert-butyl-benzothiazole sulfonamide; 4500 tonne capacity) which is so far entirely imported into India, whose domestic demand is estimated to be 9,000 tonnes.

So a scenario of lower imports of rubber chemicals from China in the near future can help NOCIL ramp up its production. The key thing to monitor for the company would be the production shutdown period for the leading Chinese rubber chemical company - China Sunsine Chemical. Its key facilities are about 600 km away from the epidemic epicenter.

However, what can restrain NOCIL from capturing the new opportunities is raw material availability. More than 40 percent of NOCIL’s raw material is imported, 10 percent from China. Aniline and Nitro Benzene are amongst the key raw materials for rubber chemicals which are sourced from China.

Carbon black: Carbon black - used as black pigment and reinforcer for tyres, paints and plastics – imports from China constitute about 10 percent of domestic demand. Both the players – Himadri Speciality and Phillips Carbon-- have been undergoing capacity expansion in order to cater to the undersupplied domestic market. However, the recent slowdown in the automobile end market has weighed on volumes sold and realizations. Lower imports from China could be a much needed reprieve for these players.

However, due to the current epidemic in China, there is a likely scenario of lower dumping of electrodes in India. Secondly, as China contributes more than 50 percent to global steel production and exports roughly 10 percent of that, a production halt for steel plants in China would mean higher production in steel plants elsewhere which as matter of fact also means higher throughput through the EAF route. This scenario is positive for graphite electrode makers such as HEG and Graphite India. But a sharp slowdown in global growth due to the epidemic in China could also, on the contrary, result in lower demand for steel as well as graphite electrodes.

The Dyes and Pigments sector in the last few years has benefited from the China opportunity as increased compliance norms had led to closure of various chemical manufacturing facilities in China. The current problem is seen as having a more pronounced effect than the situation few years back when due to environment compliance large players such Hubei Chuyuan had to shut down facilities. Prices of key dye intermediates H-Acid and Vinyl Sulphone have already moved up in the range of 35-50 percent from the average price in Q3 FY20. The management of Bodal Chemicals estimate that epicenter of the epidemic – Hubei province along with adjacent Henan province-- contribute 90 percent of the China’s production of Vinyl Sulphone. Most of the plants in these provinces including that of Hubei Chuyuan are already closed.

Since globally, India and China are the major suppliers of dye intermediates, some demand may shift from China to India. Most of the Indian dye intermediate players such as Bodal Chemicals, Shree Pushkar, Bhageria Industries, Kiri Industries, Aksharchem can benefit from the situation on both the volume and pricing fronts.

However, even then the capacity utilization for Indian players may not be 100 percent as about 20-30 percent of raw materials are sourced from China at the industry level. Due to this, prices of key raw materials such as sulphur, aniline, caustic soda and naphthalene are volatile and there could be a sourcing challenge for them. In India, smaller dye intermediate manufacturers which depend on supply of raw materials from China are likely to close down in case of extended shutdown in China. Similarly, dye manufacturers which are not backwardly integrated would find it difficult to survive due to a spike in dye intermediate prices.

Bodal Chemicals, due to its integrated operations is relatively better placed. As its dye intermediates business is running at 70 percent utilization, it has scope to cater to additional export orders. It gets about a third of its revenue from H-Acid and Vinyl Sulphone and only 12 percent of raw material is imported. As the company is carrying raw material inventory of three months, it is hedged for the near-term. Having said that, sales through its Chinese subsidiary would likely get impacted.