UPCOMING EVENT:Watch leaders discuss the biggest issue of our times at the Sustainability 100+ Summit. Register now!
you are here: HomeNewsBusinessMoneycontrol Research

Is the long-awaited upturn in India’s capex cycle finally happening? In an interview with CNBC-TV18, Uday Kotak, Managing Director and Chief Executive Officer of Kotak Mahindra Bank, said that a revival in private capex is imperative for raising India’s growth rate.

At the same time, animal spirits in the corporate sector are low and corporate earnings for the December quarter have been nothing to write home about. Indeed, several of the large engineering companies including Larsen & Toubro (L&T), Cummins India, Thermax and others have been airing fresh concerns. Worries over the shift in the government’s focus towards consumption, political uncertainty due to the elections, slow export growth and tighter funding conditions have emerged as major challenges for India’s capex recovery. Moreover, many firms are busy repairing their balance sheets and are in no mood to undertake fresh investments.

A detailed look into each of these factors indicate there are good reasons to expect a delayed recovery in the capex cycle.

Shift in government’s focus
Political uncertainty and a shift in the government’s focus from investment to consumption has been a factor weighing on capex. This is all the more alarming as much of recent capex has been government-led. Ahead of elections this year, the Interim Budget doled out several handouts for various sections of society. To compensate, the government has reduced its capex plans. The government’s total capital expenditure has been pegged at Rs 9.54 lakh crore in the Union budget for FY20 as against 9.61 lakh crore in FY19, according to the revised estimates. Gopal Ritolia, an analyst with broking house UBS Securities India, said, “Analysis of capex trends over the past 15 years for a universe of 3,000 companies and project pipelines indicate metals, power, oil & gas and telecom, contributing 58 percent of the total capex, will remain sluggish. Analysis of budget documents show a deceleration in highway and railway capex.”

In an interview with CNBC-TV18, AM Naik, Group Executive Chairman, L&T, said the political agenda might result in capital flowing from the infrastructure to the agriculture sector.

Moreover, it’s not just the shift in government focus from capex to consumption that is worrying — the results of the upcoming elections is also a source of uncertainty. 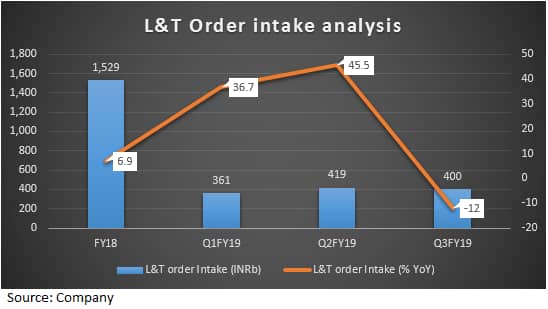 Elections to lead to a waiting game
The management of Cummins India, which receives a substantial amount of its revenue from government projects and the Railways, said during its earnings conference call it is optimistically cautious about the coming quarters in light of the upcoming elections.

"After the adverse results in the recently held state elections, people have started worrying about political stability in the country and that has led a few of the decision makers to wait," Thermax’s management indicated during its Q3 FY19 earnings call.

During times of political uncertainty, corporates typically delay major capex to wait for better clarity about changes in policies that may come up.

"If there is a much wider spectrum of parties that come together and come to power, the government may not be very strong. Therefore, for one-year after the election, I do not see a lot of growth for the sector, especially if there is a coalition government," Naik stated. Stressed credit market
The credit crisis in the non-banking financial companies (NBFC) space, coupled with massive bad loans in banks, has led to a scarcity of funds, with the lenders turning risk averse. Besides, credit spreads have increased and that is leading to an increase in the cost of borrowing. In December, industry credit growth was a low 4.4 percent compared to over 20 percent for services and over 15 percent in the case of retail loans. While the credit growth is picking from the lows, it is still way below its long term range of about 15-20 percent, thus lending very little support for capex recovery.

On a relative basis as well, the divergence between credit to industry and credit to retail is huge, indicating that most bank lending has gone in favour of non-industrial customers. In the past two years (December 2016 to December 2018) while gross bank credit has risen at a compounded annual growth rate (CAGR) of 11.1 percent, credit to large industries has grown by a paltry 3.47 percent.

Weak balance sheets
So far, capex has been fuelled by the government. For instance, during December 2018, private projects under implementation saw a mere one percent growth, better than the 1.4 percent decline in November, but far lower than the 6.5 percent growth recorded by public projects under implementation. Many of the asset-heavy companies are struggling to repair their balance sheets and several of them are monetising their assets or have been forced to liquidate assets.

Based on its study of the top 200 asset heavy corporates, India Ratings said that the stressed corporates have a limited ability to undertake any meaningful capex activity over the next 5-7 years, owing to weak credit metrics as indicated by interest cover of 0.5 times and net leverage of 17.8 times, along with an eight percent decline in earnings before interest, tax, depreciation and amortisation (EBITDA).

Slowing exports
Companies such as Thermax are sounding increasingly cautious about the export market as well.

Global trade tensions, stiff Chinese competition, global slowdown and issues like Brexit could cause a slowdown in demand.

India's export of engineering goods dropped about 3 percent in December 2018. EEPC India, (formerly Engineering Exports Promotion Council) has termed this a matter of grave concern and indicated that this is due to trade tensions and the global slowdown.

Supply-side concerns
With some of the stressed assets under National Company Law Tribunal (NCLT) and other restructuring now being acquired or resolved, the stalled capacities are gradually coming back into the system, examples being the Bhushan Steel and Monnet Ispat assets.

Data from the Reserve Bank of India (RBI) about industry capacity utilisation depicts a slight improvement from about 73.8 percent to 74.8 percent currently, but is still quite low. It is expected that for meaningful capacity expansion to kick-start, this ratio should touch near 85-90 percent levels. This is not going to happen soon.

India Ratings expects capacity utilisation of the top 200 asset-heavy corporates to remain at FY15-17 levels of 65-70 percent over FY18-20 owing to global overcapacity and transition to the Goods & Services Tax (GST) regime. Moreover, utilisation levels may also be hit by lower demand growth as reflected by a nine percent growth in nominal private final consumption expenditure in H1 FY18 compared with double-digit growth in FY17. 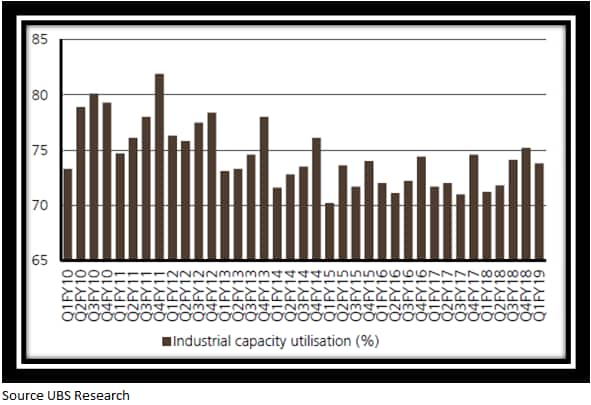 To sum upHow much time can it then take for the capex cycle to turn? “While aggregate industrial capacity utilisation has bounced off multi-year lows, we estimate it would take at least two years of about 10 percent growth to reach around 90 percent utilisation — the level where the private sector has historically started to order new capacity,” Ritolia stated.