Trade Spotlight | What should you do with Matrimony, Sterling Tools, IOL Chemicals, ITI, Trident on Thursday?

At current juncture, Trident is in crucial support zone of Rs 35-36. Moreover, exactly at those levels, we have seen Bullish Engulfing on June 21 along with volume picking up and it is a sign of positive momentum.

The market failed to extend its positive momentum seen in previous session as weak global sentiment and selling pressure in every sector pulled benchmark indices down on June 22.

The Stochastic has given a negative crossover, clearly indicating that sentiments are weak at the moment, while the India VIX, which gauges the expected volatility in the market, remained above 20 levels, suggesting continuity in volatile swings in the market and the trend could remain in favour of bears. The VIX rose by 0.74 percent to 21.30 levels.

Broader markets also reeled under pressure after a sharp rebound in the previous session. The Nifty Midcap 100 index declined 1.6 percent and Smallcap 100 index fell 1.4 percent as about five shares declined for every two advancing shares on the NSE.

But there were several stocks that outperformed the broader space in the falling markets including ITI which surged 17 percent to Rs 104, Matrimony which gained 6.7 percent at Rs 823, Sterling Tools which climbed 6 percent to Rs 238.5, IOL Chemicals and Pharmaceuticals which rose 3.3 percent to Rs 321, and Trident which jumped 4.4 percent to Rs 38.

On the weekly chart, the counter is near resistance levels of approximately Rs 260. Over the last couple of years, the stock has been rejected two times from Rs 260 levels, so one should wait for any fresh buying as of now.

If already holding position, then one should book some profits at current market price. Last but not the least fresh buying in the counter will only trigger once it successfully closes above Rs 260 and settles in. At current juncture, Trident is in crucial support zone of Rs 35-36 (see chart). Moreover, at the said levels, we have seen Bullish Engulfing which was made on June 21 along with volume picking up and it is a sign of positive momentum.

One should buy, hold and add at current market price with upside potential till Rs 45 with downside support of Rs 35. Matrimony has given nice upmove in the last session but the major hurdle of Rs 878 is still intact. From Ichimoku Cloud point of view, the stock is above cloud which is a positive sign but T-K cross is not visible clearly. So one should wait for Matrimony to close above Rs 878 and settle in, then only fresh buy will trigger. 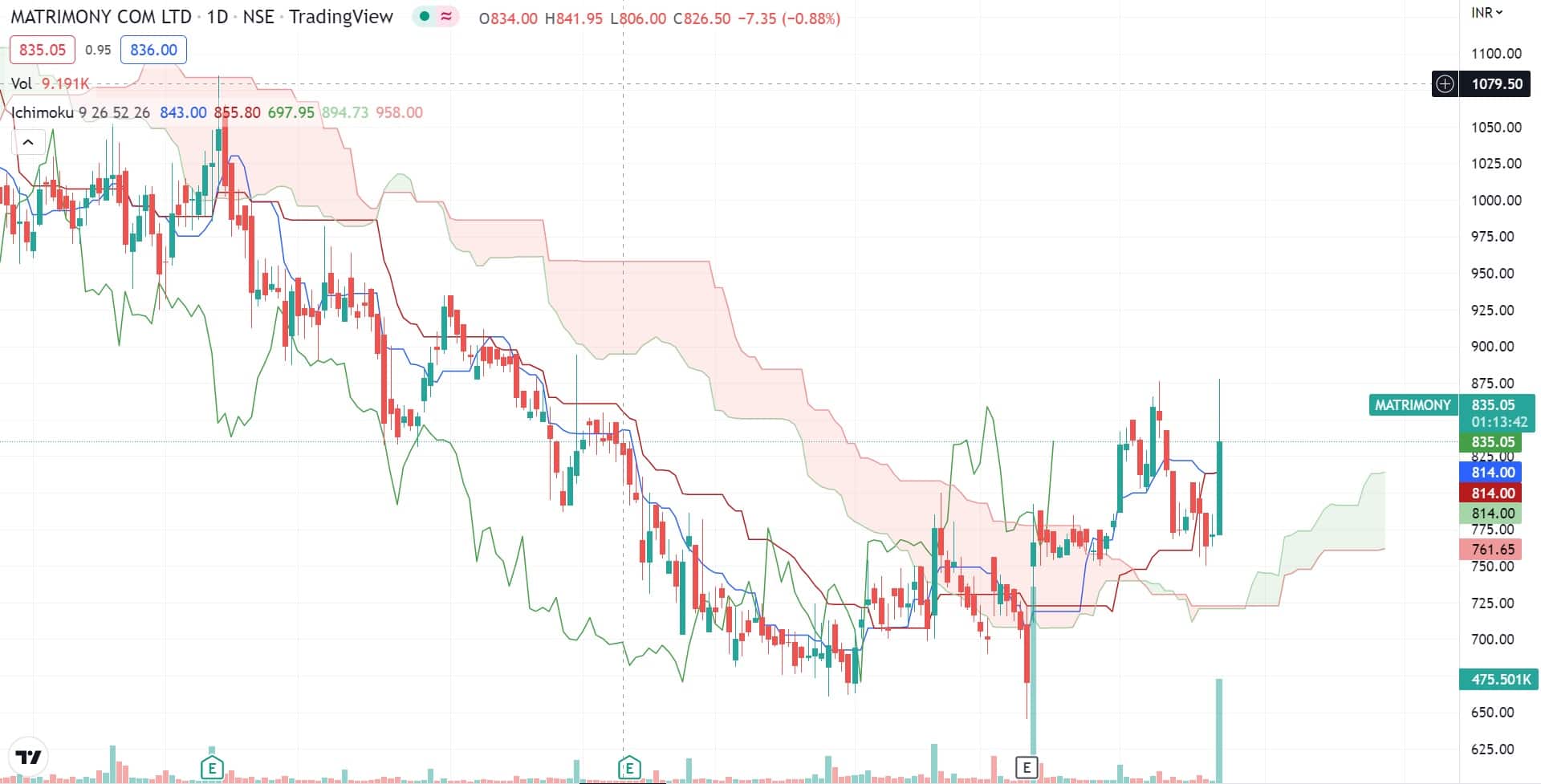 The counter has corrected almost 60 percent from its recent high of Rs 537 in April. At current juncture, the stock is taking support near potential reversal zone (Rs 310-325) of bullish bat pattern.

Moreover, we are getting extra confirmation from Bullish Harami candlestick pattern which was made on June 21. One can buy this at current levels with upside potential of Rs 380 and downside support is at Rs 295. 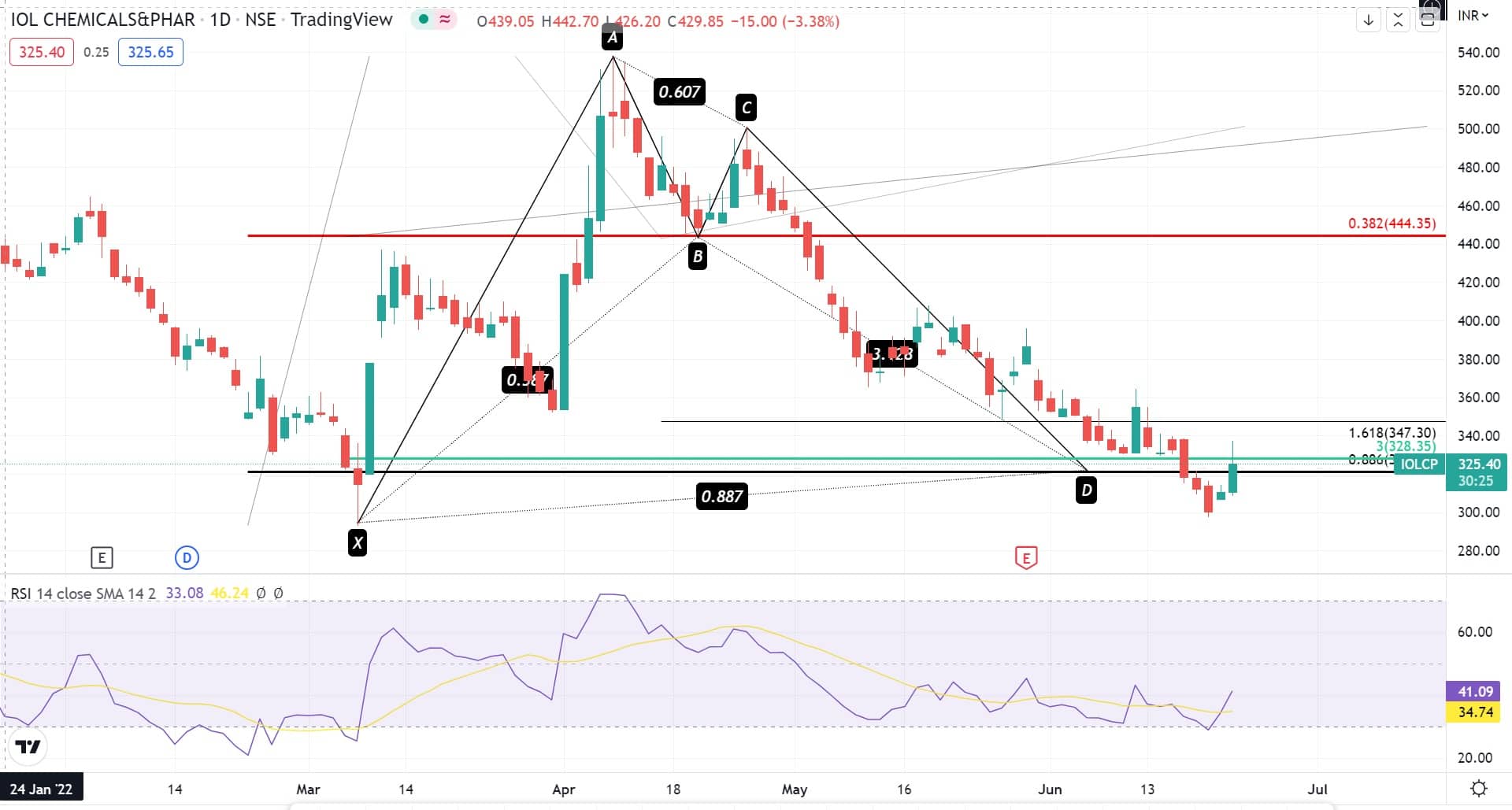 In the previous session we witnessed massive rally of 17 percent. Though upmove is massive but on weekly chart there is a lot of resistance seen from Rs 106-115. No fresh buying is advised if you are holding this; start booking in the range of Rs 110 -115 because we may witness strong selling pressure from resistance levels. Disclaimer: The views and investment tips expressed by investment experts on Moneycontrol.com are their own and not those of the website or its management. Moneycontrol.com advises users to check with certified experts before taking any investment decisions.
Sunil Shankar Matkar
Tags: #IOL Chemicals and Pharmaceuticals #ITI #Market Edge #matrimony #Nifty #Sensex #Sterling Tools #Stocks Views #Technicals #Trade Spotlight #Trident
first published: Jun 23, 2022 07:33 am