Trade Spotlight | What should you do with Manappuram Finance, Navin Fluorine International, Prince Pipes on Monday?

For Prince Pipes, the daily and weekly strength indicator RSI is in a bullish mode, indicating strength in the short to medium- term time frame

The Sensex closed 89 points higher at 58,388, while the Nifty was up 15 points at 17,397 and formed a Doji pattern on the daily charts, an indication that the bulls and the bears are indecisive about the future.

Stocks in action included Manappuram Finance, which rallied 6.4 percent to Rs 108.15 on August 5, its highest closing since May 9. It formed a large Bullish Engulfing candlestick pattern on the daily chart by recouping the losses of the previous three sessions. The volume was also very large.

Navin Fluorine International gained 3.6 percent to end at a record closing high of Rs 4,476.25. It formed a big bullish candle on the daily chart with above-average volumes. Prince Pipes and Fittings was up 4.7 percent at Rs 633.45, its highest closing since June 3. It formed a large bullish candlestick on the daily charts with robust volumes.

On the daily time frame, the stock saw a trend reversal as it confirmed higher tops and bottoms. The positive crossover of 20 and 50-day simple moving averages (SMAs) signals bullish support.

With the strong gains of August 5, the stock managed to surpass 100-day SMA (Rs 102) on a closing basis, indicating further strength. It has also confirmed "rounding bottom" formation at Rs 105 along with huge volumes, suggesting positive bias.

The daily and weekly strength indicator relative strength index (RSI) is in a bullish mode, indicating rising and sustained strength in a short to medium-term time frame.

Investors should buy, hold and accumulate the stock with an expected upside of Rs 120-126, with downside support zone of Rs 99-97. 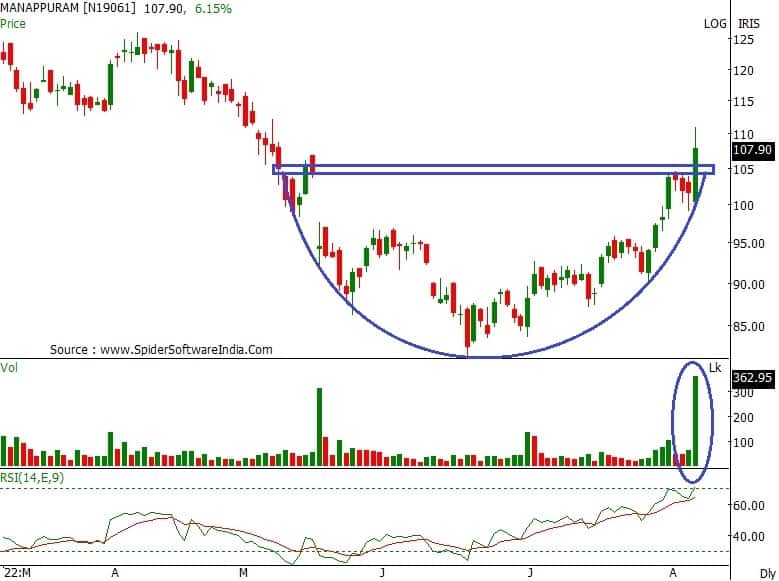 With a strong buying momentum in the past couple of weeks, the stock has decisively broken out of its one-year "consolidation zone" at Rs 4,300 levels on a weekly closing basis. The breakout was accompanied by huge volumes, indicating increased participation at breakout zones.

Investors should buy, hold and accumulate the stock with an expected upside of Rs 4,600-4,750 with the downside support zone at Rs 4,200. With the August 5 upmove, the stock broke out of months of "multiple resistance" at Rs 620. The breakout was accompanied by huge volumes, indicating increased participation.

On the daily time frame, the stock has entered into the bullish mode, forming a series of higher tops and bottoms. The positive crossover from 20 and 50 days SMA implies positive bias ahead.

Investors should buy, hold and accumulate this stock with an expected upside of Rs 670-690, with a downside support zone of Rs 620-600. 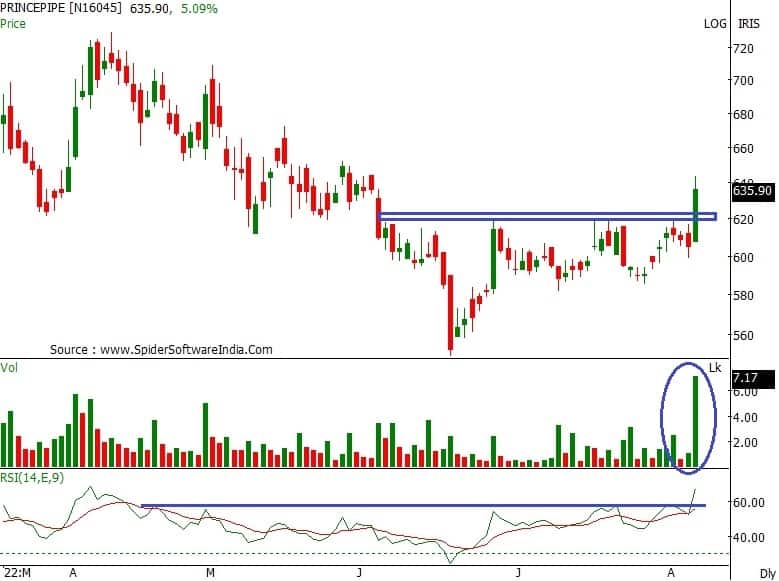 Disclaimer: The views and investment tips expressed by experts on Moneycontrol.com are their own and not those of the website or its management. Moneycontrol.com advises users to check with certified experts before taking any investment decisions.
Sunil Shankar Matkar
Tags: #Manappuram Finance #Market Edge #Navin Fluorine International #Nifty #Prince Pipes and Fittings #Sensex #Stocks Views #Technicals #Trade Spotlight
first published: Aug 8, 2022 06:11 am