Trade Spotlight | What should you do with IDBI Bank, Bank of India, Dabur India?

The market has consistently been making new highs, extending the upward journey for sixth session in a row on November 29, aided by positive global cues, buying in FMCG, metal and pharma stocks. However, the broader markets were under pressure with the Nifty Midcap 50, Midcap 100 and Smallcap 100 indices falling half a percent each.

The benchmark indices both have given a record closing on Tuesday. The BSE Sensex rallied nearly 180 points to 62,682, while the Nifty50 closed above 18,600 mark for first time in history, climbing more than 50 points to 18,618.

Stocks that were in action included Dabur India which was the biggest gainer in the derivative segment, rising over 6 percent to Rs 593. The stock has formed large bullish candle on the daily charts with significantly higher volumes, making higher highs for fifth consecutive session. It has seen a breakout of downward sloping resistance trend line adjoining August 19, November 14 and November 28m 2022.

The stock had recently witnessed a breakout from its previous swing high resistances and has been forming a ‘Higher Top Higher Bottom’ structure. This indicates a short term uptrend in the stock and since the RSI (relative strength index) oscillator continues to hint at a positive momentum.

The stock could continue to trend upwards in the near term. The '20 DEMA' (days exponential moving average) support for the stock is placed around Rs 48 while resistances will be seen around Rs 57 and Rs 63. 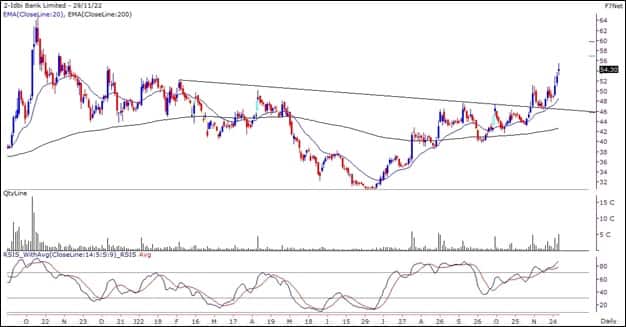 The PSU Banking stocks have witnessed a sharp upmove in last couple of months where stocks within this sector have witnessed good price volume action. The trend still continues to remain positive as the structure remains bullish.

Traders with existing positions can continue to ride the trend, but fresh buying should be preferred on declines and hence, a ‘buy-on-dip’ strategy should be preferred. The supports for the stock are seen around Rs 81 followed by Rs 74. 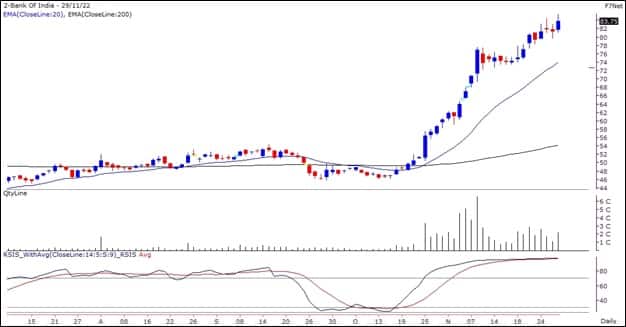 The RSI oscillator is hinting at positive momentum and hence, the stock could continue its upmove in the near term.

Thus, traders can look to trade with a positive bias as prices have potential to continue this rally towards Rs 630-640 in the near term. The immediate support for the stock is placed around Rs 570.