Nagaraj Shetti of HDFC Securities said the expected range or consolidation movement is unlikely to damage the near term uptrend status of the market.

The market rebounded and closed higher on April 12, but snapped seven-week winning streak to end the week on a negative note amid caution as March quarter earnings season as well as polling for general elections started during the week.

For the week, the Nifty lost 0.19 percent and formed 'Hanging Man' kind of formation on the weekly chart.

"The near-term trend of Nifty is rangebound and one may expect this high-low range of 11,750-11,550 to continue for the next curtailed week. Further upside from here could encounter resistance at 11,710-11,750 in the next week," Nagaraj Shetti, Technical Research Analyst at HDFC Securities told Moneycontrol.

He said the expected range or consolidation movement is unlikely to damage the near-term uptrend status of the market.

Shabbir Kayyumi, Head of Technical & Derivative Research at Narnolia Financial Advisors said index if trades below strong psychological mark of 11,500, it will extend prices lower towards crucial support of 11,420 and below that towards monthly pivot point levels (11,360).

The market will remain shut on April 17 for Mahavir Jayanti and April 19 for Good Friday.

Maximum Call open interest (OI) of 29.52 lakh contracts was seen at the 12,000 strike price. This will act as a crucial resistance level for the April series.

No significant Call writing was seen.

Maximum Put open interest of 29 lakh contracts was seen at 11,500 strike price. This will act as a crucial support level for the April series.

No significant Put unwinding was seen. 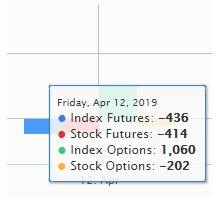 Sadhana Nitrochem: Board meeting to be held on April 17 to consider interim dividend.

Bajaj Finance: Company's officials will meet certain institutional investors, banks and analysts on debt side at a Non-Deal Road Show in Singapore, Hong Kong and Tokyo during April 15-18.

APL Apollo Tubes: Conference call with investors and analyst to be held on April 16 to discuss the acquisition of Shankara’s manufacturing unit.

Jet Airways: SBICAPS acquired 5.19 percent stake in the company on April 11 via pledge encumbrance. Rajshree Pathy submitted her resignation as an Independent Director of the company, owing to time constraints on account of her other current commitments.

Pricol: ICRA downgrades rating on long term - line of credit facilities of the company to BBB (Negative) from BBB+ (Stable).

ITI Limited: Company records a turnover of Rs 2,051 crore for FY19, up 20 percent compared to the previous year.

Sudarshan Chemical Industries: Board approved the proposal to enter into a definitive agreement with GMM Pfaudler (GMMP) to divest industrial mixing solutions division (IMSD) of the company.

Dr Reddy's Labs: Company entered into a definitive agreement to acquire a portfolio of 42 approved, non-marketed Abbreviated New Drug Applications (ANDAs) in the US.

Trident Texofab: Company' newly set-up manufacturing unit in Surat, Gujarat started its commercial production and operations and the said unit has been set up for manufacturing grey fabrics.

International Paper APPM: There would be annual outage (maintenance) from April 15, 2019 to April 22, 2019 (both days inclusive) in the manufacturing facility located in Kadiyam, East Godavari District, Andhra Pradesh. The estimated loss of production would be around 200 MTs per day.