Markets ended marginally lower after a range-bound session on December 10, taking a breather after the recent surge.

Participants took money off the table amid weak global cues. However, resilience in FMCG majors capped the downside and recovery in metal and banking majors in the last hour further trimmed the losses.

"Indications are in the favour of some consolidation in the index and it would be healthy for the markets. The Nifty has critical support at 13,350 and its breakdown may result in further correction ahead. In the case of a rebound, the 13,550-13,600 zone would act as a hurdle," said Ajit Mishra, VP-Research, Religare Broking.

Maximum Call open interest of 24.10 lakh contracts was seen at 13,000 strike, which will act as a crucial level in the December series.

Maximum Put open interest of 37.21 lakh contracts was seen at 13,000 strike, which will act as crucial support in the December series.

Central Bank of India: The board will meet on December 11 for general purposes.

Hatsun Agro Products: The board will meet on December 11 to consider and approve the bonus issue.

Power Grid: The board will meet on December 12 to consider interim dividend.

Midas Infra Trade: The board will meet on December 12 to consider and approve quarterly results.

Sayaji Hotels: The board will meet on December 12 to consider and approve quarterly results.

Kotak Mahindra Bank - The RBI restricts the bank from paying out dividends on PNCPS as well.

Ircon International - The company is awarded work of Rs 900 crore by NHAI.

Bank of Baroda- The bank has revised the Marginal Cost of Funds Based Lending Rate (MCLR) w.e. f. December 12, 2020.

TCS - The company expands its presence in Texas with a new facility in Austin. 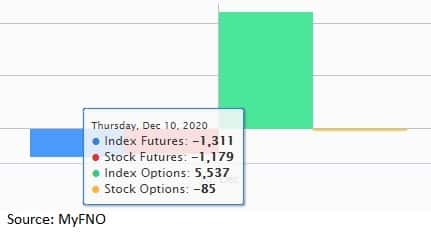 Two stocks - Canara Bank and Punjab National Bank - are under the F&O ban for December 11. Securities in the ban period under the F&O segment include companies in which the security has crossed 95 percent of the market-wide position limit.