Global cues turned negative following a spike in US bond yields and a surge in COVID-19 cases across the globe, including India, leading to some bit of profit-taking at higher levels.

A volatile week for Indian markets as every rise was being sold into but the bulls managed to gain some control on March 19 after days of selloff. Both the Sensex and the Nifty50 closed below their crucial support levels, raising concerns about a fresh selloff in the coming week.

As many as 31 stocks in the BSE500 index fell 10-30 percent. These include Raymond, Tata Coffee, IDBI Bank, Dish TV, Tanla Platforms, Bank of India, Future Retail, and Bliss GVS Pharma. 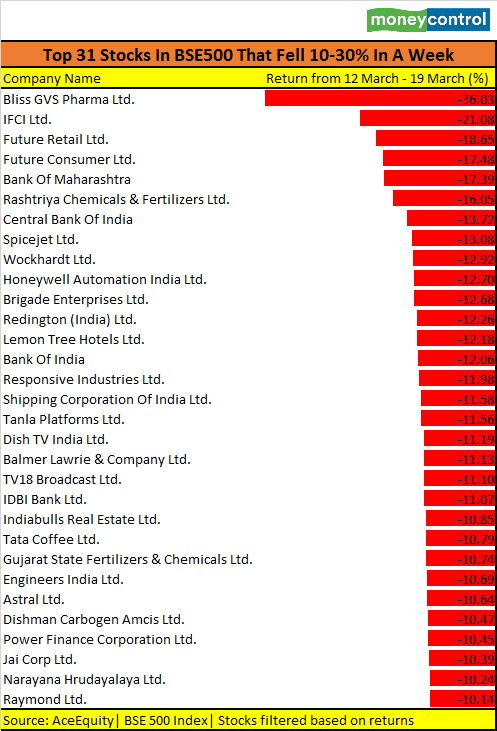 Global cues turned negative following a spike in the US bond yields and a surge in COVID-19 cases across the globe, including India, leading to some bit of profit-taking at higher levels.

“Yield on US 10-year notes, which has risen sharply in the past seven weeks on growth expectations, hovered near a 14-month peak at $1.742 percent,” said a Reuters report.

The US 10-year treasury note yield (were) highest in over 14 months. The sharp rise has been driven by a spread of triggers such as inflation and economic recovery, Palka Chopra, Senior Vice President, Master Capital Services told Moneycontrol.

"Treasury bonds are considered to be the safest investment and investors generally invest in treasury bonds in times of economic recession. When the economy shows a sign of recovery, investors shift their focus towards risky assets. This triggers a selloff in bonds," Chopra said.

“Stocks which have undergone a correction in the recent pressure could also see buying. FMCG and pharma can see good momentum going forward,” she said.

“While FIIs were net buyers in the cash segment, DIIs and retailers have been selling in this market after being spooked by the rising 10-year treasury bond yields and rising inflation,” Shah said.

The Nifty closed at 14744, down 1.9 percent amid elevated volatility during the week. “We expect the Nifty to trade with positive bias in the range of 14,400-15,000 in coming weeks. Hence any decline should not be construed as negative rather an incremental buying opportunity,” Dharmesh Shah, Head–Technical, ICICI direct, told Moneycontrol.

“A decisive close above the psychological 15,000-mark would confirm the conclusion of ongoing corrective phase with an extended target of 15,300,” he said.

IT, pharma and FMCG sectors were better placed on relative rankings and risk-reward parameters and were expected to outperform, Shah said.