"I would give rating of 9 out of 10. I would be happier if GST brings petrol and diesel under the GST ambit," Sumit Bilgaiyan of Equity99

Goods and Services Tax (GST) was one of the India’s most bold reforms. We have seen little hiccups in the execution, but it has come a long way.

I would give a rating of 9 out of 10. I would be happier if GST brings petrol and diesel under the GST ambit. But we are making slow-but-steady move in that direction.

GST was one of the biggest steps in the direction of formalisation of the Indian economy. As we all know, India had an economy which was considered as a black economy but because of GST and demonetisation, it has reduced at quite a high rate.

There are lots of industries which have been opened up just because of GST. 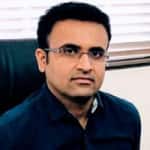 Here is the list of stocks that are likely to benefit from GST reforms:

We remain bullish on the stock. Management remained confident about the jewellery segment's growth by giving guidance of 20 percent CAGR over FY18-23.

New products will also play a big part in driving this growth. Proportion of new products has increased consistently every year to 30 percent of sales as of FY18 and is likely to cross the 50-percent mark by FY23.

We are recommending a Buy, looking at growth prospects of the company.

NCC has consistently focused on execution, which is backed by strong order backlog which makes it one of the best stocks in the infrastructure basket.

If you look at the Q4FY18 numbers, it has delivered a robust performance with its revenue and EBITDA growing by 12 percent YoY and 75 percent YoY respectively, which led to EBITDA margin expansion to 12.7 percent during the quarter.

We believe NCC will ramp up its orders in FY19 quite aggressively, which will lead to pick up in execution and better mobilisation of resources which will led to profit and margins expansion aided by better topline growth.

NCC has 4x of order book compared to FY18 topline. Looking at the massive pile up of domestic orders, NCC is looking to shut down its international operations over the next 6-12 months.

This is quite a positive step as it will allow NCC to consolidate its position in the market. We are recommending a Buy.

With improving demand scenario for liquor and execution on track, it has witnessed rise in volume growth, margin expansion and free cash flow generation.

Uttar Pradesh is an important market for Radico Khaitan, where the new government introduced ‘go-to-market’ distribution model. This is positive for strong brands, including Radico Khaitan.

Margins should expand due to improving product mix and benign raw material prices. We are recommending a Buy.

Disclaimer: The author is Founder of Equity99. The views and investment tips expressed by investment experts on moneycontrol.com are his own, and not that of the website or its management. Moneycontrol.com advises users to check with certified experts before taking any investment decisions.