As RBI raises repo rate, here are 10 rate-sensitive stocks to bet on

As markets salute the central bank, we decided to come up with rate-sensitive stocks that experts say can return up to 26 percent over the next 3-6 months

The Monetary Policy Committee (MPC) on September 30 delivered an interest rate hike of 50 basis points on expected lines, retaining its inflation forecast at 6.7 percent for FY23.

However, the central bank decided to lower its FY23 real GDP growth estimate to seven percent from 7.2 percent earlier, which was lower than the S&P Global Ratings' 7.3 percent projection but same as that of Fitch Ratings.

"The MPC delivered rate hike in line with expectations. At this point, we still think that the RBI would not go too restrictive and terminal rate could hover near estimated real rates, implying not more than 100 bp hikes ahead, including today's decision. However, the extent of global disruption will remain key to the RBI’s reaction function ahead," Madhavi Arora, lead economist, Emkay Global Financial Services, said.

Given the RBI acted in line with other central banks, the equity markets rebounded with the Nifty50 moving closer to 17,000, up 146 points at 16,964 while the BSE Sensex rallied more than 500 points to 56,936 at the time of writing this article, after losing seven percent in previous seven consecutive sessions.

The volatility also cooled down further with the passing of two key events (RBI policy and Fed meet). India VIX declined by 3.87 percent to 20.48 levels.

Banking & financial services, realty, and auto stocks participated in the run-up, but defensives IT and pharma were under pressure.

As markets salute the central bank, we decided to come up with rate-sensitive stocks that experts say can return up to 26 percent over the next 3-6 months. Returns are calculated based on the closing price of September 29.

After nearly 26 percent correction from life-high levels of Rs 2,253, Kotak Mahindra Bank took support at its 50 percent retracement level (Rs 1,625) and the stock has posted a sharp bounce till the Rs 2,000 mark before entering corrective phase again.

On the weekly charts, the stock has formed Double Bottom price pattern at Rs 1,650 levels and also the CIP (change in polarity) pattern has been seen at Rs 1,650 – 1,700 levels which provides solid support for the stock near that zone for the medium to long term.

The RSI (relative strength index) indicator on weekly time frames is moving in a range of 40 - 60 for the last one year which indicates range-bound movements of the stock.

Going ahead we can expect the stock price will continue to move in the same range in the medium term so one can accumulate the stock near Rs 1,700 – Rs 1,650 for upside potential of Rs 1,980 mark.

We recommend following a stop-loss of Rs 1,580 for this trade on a closing basis. Bank of Baroda has been moving in a strong uptrend on monthly charts with higher highs and higher lows formation since May 2020.

The stock has formed a strong base at Rs 95 levels with Double Bottom formation on the weekly charts and moved up near its 52-week high indicating existence of a strong uptrend in the medium to long term.

For the last couple of weeks, the stock has been facing strong resistance at Rs 144 levels which is its 2019 high levels and has moved in a corrective phase. However, the stock has immediate strong support at Rs 117 – Rs 113 zone where it formed CIP (change in polarity) formation.

The RSI indicator on the weekly charts is sustaining above the 55 mark indicating positive momentum in prices.

We advise a stop-loss of Rs 95 for the trade on a closing basis.

On the weekly charts, the stock has posted a Symmetrical Triangle pattern breakout with volume confirmation and currently has been in a corrective phase for the last couple of weeks. However, the stock is still sustaining above its 20-week SMA (Rs 103) indicating positive strength in the medium to long term.

The RSI indicator on the weekly & monthly charts is sustaining above the 55 mark which shows positive momentum of the stock.

In the coming future, we can expect the stock may correct till Rs 108 – Rs 103 levels where one can get good buying opportunity in the stock for an upside potential of Rs 129 followed by Rs 143 levels.

We recommend stop-loss for the trade at Rs 95 on a closing basis.

The stock has overall been in a positive trend moving above the significant 200-day moving average (DMA) zone of Rs 6,780 levels with a consolidation phase witnessed recently moving between the range of Rs 7,100 and Rs 7,600 levels but medium-term bias remains positive.

We anticipate a revival from Rs 7,000 levels which is the support zone of the channel pattern on the daily chart with major support lying near the 200 DMA level of Rs 6,750.

Our view gets negated only in case a breach below the 200DMA level is established and till then the overall trend remains positive. The stock has immense potential to rise further and one can buy and accumulate this stock for an upside target of Rs 8,000-8,200 keeping the stop-loss of Rs 6,700. The stock has indicated a breakout recently above Rs 545 levels and has strengthened the trend but with a correction has again slipped inside the channel with bias still remaining strong.

The strong support visible is near the 200 DMA level of Rs 500 where we anticipate a revival and can move ahead for another fresh upward move to breach the recent peak level.

With the chart overall looking good, we suggest buying and accumulating the stock at every decline till Rs 505 levels and expect it to rise thereafter for upward targets of Rs 580-620 while keeping a stop-loss at Rs 490. Axis Bank has witnessed a very sharp correction of 13 percent in the last week. Since then the stock has been consolidating between Rs 710-730 and it has made a solid base near Rs 710 levels.

On a daily scale, the said counter has formed a Doji like structure near the support zone and daily RSI (relative strength index) has formed an impulsive structure which is adding more confirmation for upside in coming days. One can buy between Rs 705-710 with upside seen till Rs 765 with credible support seen at Rs 680. What a classic setup we are having in Tata Motors, precise bullish BAT pattern (note: it is one of the most powerful patterns among entire harmonic arsenal) which got completed near 0.886 ratio on the daily chart with potential reversal zone of Rs 390-395.

In the current scenario, daily RSI (relative strength index) has a complex structure near the oversold zone which is also complemented by over-stretched daily MACD (moving average convergence and divergence) hinting at early reversal in counter. 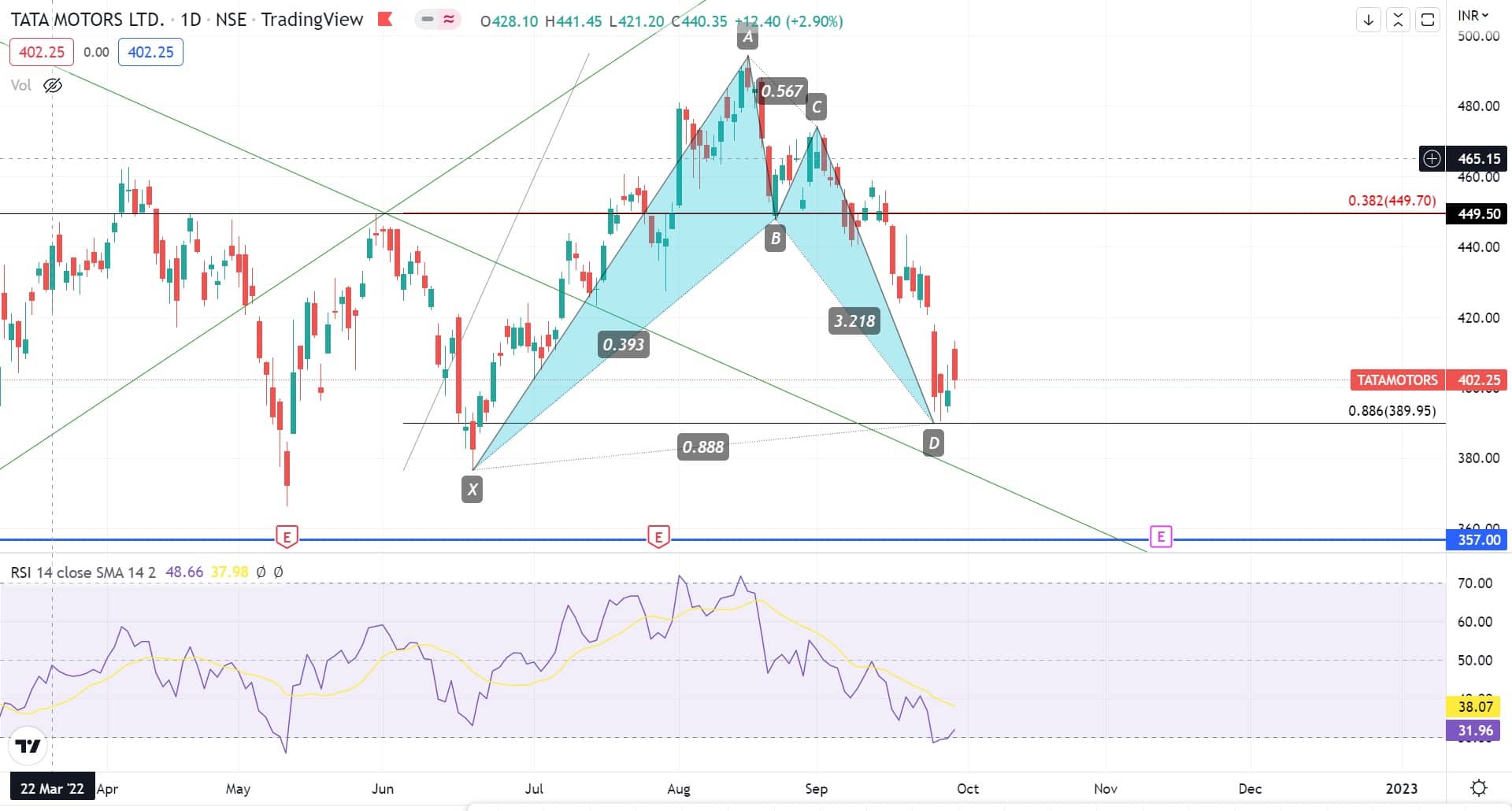 The free fall that started from November 2021 till June 2022 resulted in a 43 percent decline in price. On a weekly scale the counter has formed a bullish shark with potential reversal zone of Rs 960-990 along with double bottom near mentioned PRZ (potential reversal zone) which is adding more confirmation for early reversal in the said counter.

From an indicator perspective, weekly RSI (relative strength index) has formed a complex structure along with the MACD bullish cross which further confirms upside in the counter.

One can buy in small tranches at current levels and buy another tranche at around Rs 1,010 levels (if again tested). Upside is expected till Rs 1,145 and support is seen around Rs 970. 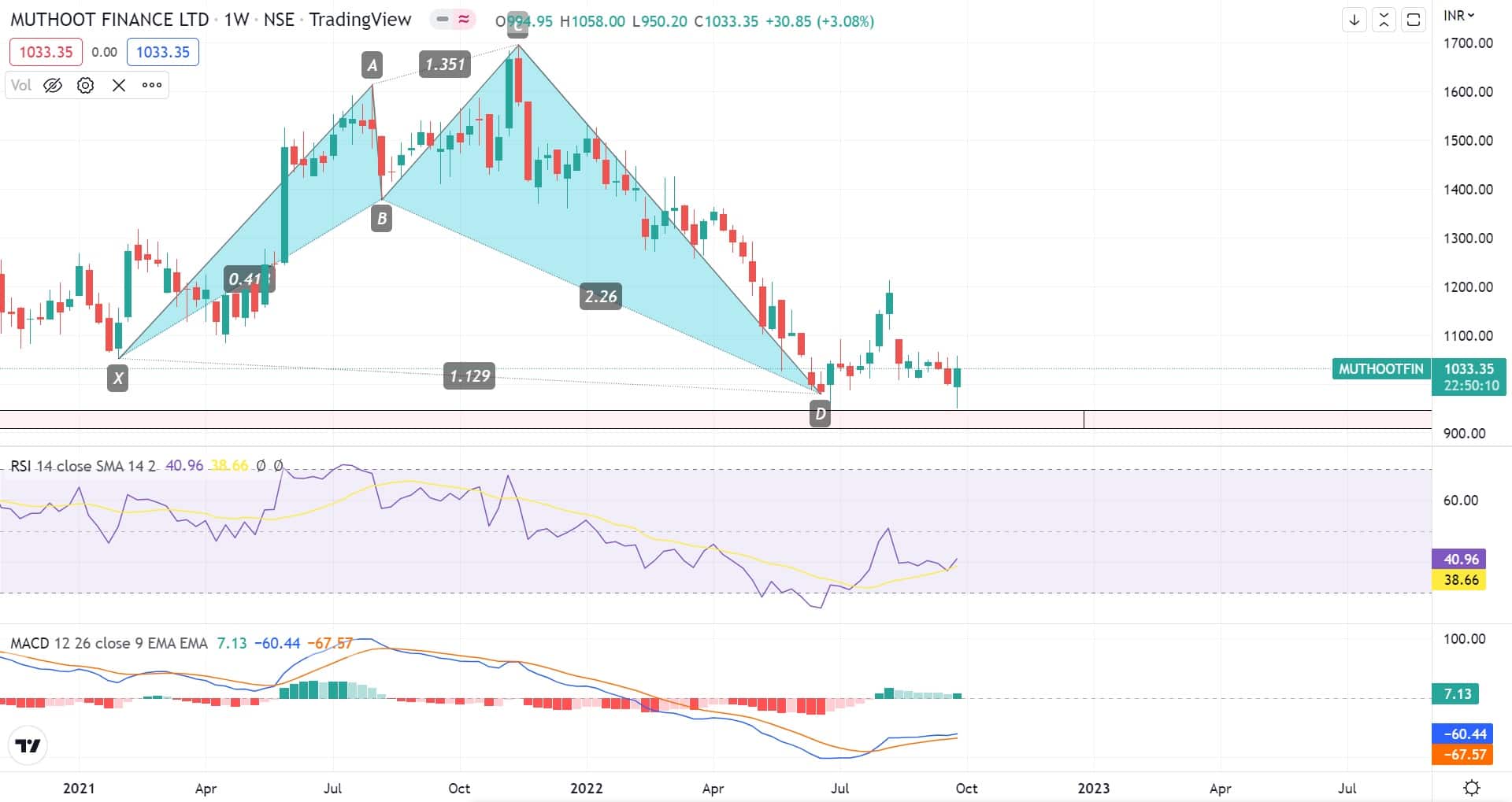 The stock has been consolidating around the crucial support of 200DMA after it corrected from Rs 235 to Rs 176 in quick sessions. The RSI has entered into an oversold zone which may induce a recovery over the short term.

A decisive move above Rs 185 may induce a strong rally towards Rs 210. The RSI is entering into an oversold zone which may induce a recovery over the short term. A decisive move above Rs 415 may induce a strong rally towards Rs 470. On the daily chart, the stock has moved up after a consolidation suggesting a rise in optimism among investors. The momentum indicator is in a bullish crossover on the daily chart.

Over the short term the stock is likely to remain strong; on the higher end it may move up towards Rs 500.