Ours is Company, which honestly tried to restructure its debt even if that meant parting of precious assets because credibility is more important, said Manoj Gaur, Executive Chairman, JP Associates.

ICICI Bank-led consortium has completed the Rs 16,000 crore Jaypee-Ultratech deal. With this, part of the debt of Jaiprakash Associates and Jaypee Cement has been transferred from a stressed account to a triple A-rated new company.

Throwing more light on the deal and the outlook for the company going forward, Manoj Gaur, Executive Chairman & CEO, Jaiprakash Associates said the organisation was determined to get back the credibility of the company. He said the transaction with UltraTech Cement was complex one but got concluded only because of high trust levels between both the parties and the quality of assets.

He also clarified that the whole deal went through post the approvals from the Joint Lenders Forum and the Independent Evaluation Committee (IEC).

He said, it was a tough phase for the company but going forward the company would focus on real estate, hotels, E&C & Cement business and aim for Rs 6000 crore topline from the remaining businesses.

He said the debt repayment would happen in the next 3-4 days. Going forward they would balance debt-to-equity ratio. 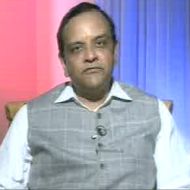 He is also confident that the residual assets will be sufficient to pay the balance debt.

A: As already reported and as indicated by you in your opening remarks, we have been able to conclude this transaction. This transaction underlines many facets of this organisation, assets have been world-class. The organisation built the assets which drew attraction from a prestigious companies like UltraTech Cement. It has been a complex transaction but it could only be concluded because of very high trust level between both the organisations and the quality of assets. I am very thankful to all the banks, all the people, various state governments because this is the first transaction after Mines and Mineral Development and Regulation (MMDR) Act came into existence which was modified also and all the formalities were completed and transaction got consummated yesterday.

It was done because the organisation is determined that we have to redeem the credibility of this organisation and what many people do not know, I have no hesitation in admitting that it has been a tough phase for the organisation. We grew, we expanded but we believed in infrastructure story of the country; in power, in roads and of course the traction came, economy did not go as per the expectation.

It has impacted everybody including banks but the crux of the entire transaction vis-à-vis JP that there is a company which honestly tried to restructure its debt even if that meant parting of very-very precious assets but the credibility is more important. There is an issue of large FD holders of 88,000 and everything will get paid in next three-four days. So the organisation now is much trimmer, definitely have shrunk in the size but financial are going to be stronger.

Anuj: You had to sell some of your really good assets, cream of your assets in this process. Going forward, I want to understand, how is your profit and loss (P&L) account is going to look like now that your interest cost will be much lower and what kind of residual assets are you left with now?

A: In this Jaiprakash Associates Limited (JAL) version 2, the organisation would have cement capacity of over 5.5 million tonne. It would have hospitality business with more than 800 rooms. It would have real estate opportunity at a very important location of Greater Noida and Noida adjacent of Formula One. It would have its basic core business to concentrate - the engineering and construction (E&C) business which catapulted the organisation to this height. Definitely there are lessons to be learnt that growth has to be there but we have to have a good balance of debt and equity but at a same time -- I would say it was an economic tsunami, the last four years but even for this financial year ending March '18, god willingly even though this capacity has gone in the first quarter now virtually cement capacity of only 5 million tonne will be  available for three quarters but the business of E&C, real estate, hotels and other businesses, we are still looking for a topline of Rs 6,000 crore.

Nigel: You are one of those companies that have been making a genuine attempt to pare down your debt but the street wants to know what the equity value left in your company. We understand that close to Rs 13,000 to Rs 40,000 crore have been transferred to a special-purpose vehicle (SPV). Could you tell us if that is right and also what assets have been transferred because market rumour suggests that it is around 700 to 1,000 acres of land? Is that number right?

A: As part of complete JAL debt resolution plan, it has three parts. One is a debt by way of cement assets which has gone to UltraTech. Second is a debt which will remain as JAL residual where the capacity of cement business, residual capacity of 5 million tonne plus and all the businesses that I pointed out and of course it has investment in power and Yamuna Expressway company, infratech, fertiliser and all these are there. Third is the partial debt which has gone as a land SPV -- because this is in the Formula One place, there is a Formula One city where for three years Formula One took place and it is just 15 kilometres from the new Noida International Airport which has been sanctioned. So it's a strategic location.

So I will say this has been very innovatively done exercise where we have tried to find total solution for JAL with the help of banks and banks wanted to showcase how stressed account can be resolved if  the promoter is willing to sell the asset.

Cement plants have a commercial life of 50-70 years. So Reva is a shining example in operation for over last 32 years. So the point which I am trying to say here is that the entire scheme has been approved by the JLF, many meetings took place, over 15 meetings took place and after the last meeting which took place on June 22, the entire stretching was approved including the land SPV where more than 1,000 acres of land is going and with the valuation which has been undertaken by the banks through various agencies.

Anisha: With Ultratech deal happening, Rs 14,000 crore worth of debt is off the book but what is the sustainable portion now that JAL has right now and what has been converted on unsustainable portion where they converted into bonds or transferred to SPVs, what does that exact amount?

A: Around Rs 13,000 crore would be for the land SPV. That is the amount which is to go there and about Rs 6,000 crore will remain with JAL with the residual assets to work upon.

A: There is engineering and construction (E&C) business, there is hospitality business and we are confident that we will do this.

Nigel: You said JLF has approved it. Has the Independent Evaluation Committee (IEC) also approved this entire recast plan that we are talking about?

A: Multiple JLF meetings took place, the government of India is also very clear that financial resolution of stressed accounts should take place then banks whether it is ICICI Bank, State Bank of India (SBI) or IDBI are responsible for various accounts as per their own assessment so in this case the process is that after JLF approved the complete plan, it went to IEC then IEC held two meetings in this case then they approved this plan and then went to the voting in JLF which took place on June 22 after that only -- otherwise why Ultratech would agree to consummate a transaction like this.

So that is the way the process has been run and I only want to tell you that the entire process – we are running this process with a great sense of responsibility that we want that no pain or minimum pain to bank take place because of us. That has been a motto, that has been the teaching from my father, that is the way we are working along with my team, my professional, we all are working to actualise this.

I have come to you only to tell you that the time will change but value should not change and that is what we want to work upon and we need good wishes.
TAGS: #Business #business news #ICICI Bank #Jaiprakash Associates #Jaypee Cement
first published: Jun 30, 2017 11:46 am