Headcount fell by 9,000 at the top four IT firms in Q1 due to Covid-19. How will they fare in the next three quarters?

India’s top four IT companies fired more people than they hired during the quarter ended June. Delays in on-boarding freshers, a slowdown in lateral hiring and a decline in attrition, all in the wake of the Covid-19 pandemic, were behind the net decline in employee addition, say experts.

The top four IT firms – TCS, Infosys, HCL Tech and Wipro – employ about 10 lakh people or a fifth of the IT sector’s total headcount of 50 lakh. In the quarter that ended in June, the four firms saw a net decline of 9,000. During the same quarter last year, they had recorded a net employee addition of 22,000.

This is one of the biggest contractions in hiring companies have witnessed in a single quarter. TCS saw a decline of close to 5,000 in Q1, while Infosys recorded a decline of 3,000. Wipro saw a drop of 1,000, while HCL Tech’s net hiring figures remained largely flat, with a decline of about 150 people. Hiring in IT firms in Q1 FY21 compared to the March quarter. Source: Q1 result reports.

While presenting their March-quarter results, all the four IT firms had said there would be a freeze in lateral hiring for the first quarter of the next fiscal year and that fresher on-boarding would be deferred. Lateral hiring refers to recruiting people, mostly experienced hands, particularly in terms of pay, as their previous job

Fresher on-boarding, which usually begins in the April to June quarter, was deferred due to Covid-19. It will start from Q2 onwards and will continue through the year.

Explaining the trend, Pareekh Jain, founder of  tech consultancy firm Pareekh Consulting, said: “The June quarter sees high attrition as this is when people go for higher studies and shift to new jobs. But it had come down due to uncertainty around the pandemic,” he explained. 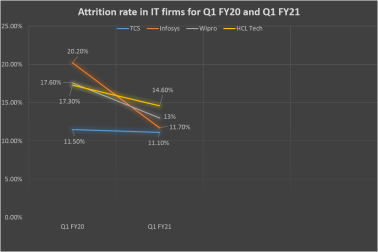 Attrition in IT firms in Q1 FY21 compared to Q1 FY20. Source: Q1 result reports of IT firms.

However, all this is voluntary attrition. Though the companies have said there will not be any Covid-related layoffs, performance-related layoffs are set to continue.

Jain expects performance-led attrition to rise 5 percent in FY21, as companies are making appraisals stringent. “By now, the appraisal process should be over and that is also reflecting in the decline in headcount,” he added.

So, how will future recruitment shape up? Hiring numbers will not be what they were in FY20, concede executives. The last fiscal year saw record hiring by IT firms with TCS alone hiring close to 30,000 freshers.

Apparao explained that typically, laterals are hired to replace those who quit the company; however, with attrition declining, lateral hiring would also come down. HCL Tech typically hires 3,500-4,000 laterals per quarter. However it has hired only 2,000 in the first three months of the current financial year.

When it comes to growth, though they have performed well despite the pandemic, IT companies will be cautious. Executives warned that a second wave and frequent lockdowns might impact business.

In a recent interaction with Moneycontrol, V Ramakrishnan, CFO, TCS, said that lateral hiring will be selective and will happen in niche areas. UB Pravin Rao, COO, said during a recent press briefing that the company is looking at hiring niche talent when it comes to laterals, and on a need basis. Infosys hired close to 5,000 laterals in Q1, while Wipro recruited close to 7,000.