It can be argued that despite enjoying windfall gains from the drop in global oil prices, the NDA government opted to shore up revenue by raising taxes, instead of passing the benefit to customers.

Even as petrol prices seem to be inching towards the psychological Rs 100/litre mark in most cities, the Bharatiya Janata Party (BJP) and Congress have been at loggerheads over a connected issue. The opposition believes that the BJP is involved in a smear campaign to blame it for high fuel prices on outstanding payments of oil bonds issued when it was in power.

Despite global crude oil prices being significantly low as compared to 2011-12, customers have to pay more at fuel stations than earlier. The average price of crude in March 2011 was $104.42 per barrel while the price of petrol in the national capital was Rs 58.37 per litre. On September 21, 2018, customers in Delhi had to dish out Rs 82.41 per litre despite crude prices retailing for $70.78 per barrel. Petrol prices have already breached the Rs 90-mark in Mumbai.

End users are paying more, and the government alleges that the pinch felt now is on account of feckless borrowing to subsidise prices in the past. However, that is not the case. The excise duty on petroleum products is much higher than it was when the UPA government was in power.

What the economist PM Manmohan Singh said & did on petroleum prices? He said that money does not grow on trees & left unpaid bills of oil bonds worth Rs. 1.3 lakh crore. Modi govt paid off the pending bills with interest because 'we should not burden our children'. #NationFirst pic.twitter.com/Z8zTV1kG1i

The BJP said in a tweet posted on September 10 that the Manmohan Singh-led UPA government left behind a debt burden of Rs 1.3 lakh crore in oil bonds. However, the tweet went on to say, "Modi govt paid off the pending bills with interest because 'we should not burden our children'. #NationFirst."

According to data sourced from the Budget document for 2018-19, this is not the case. In June 2018, Petroleum Minister Dharmendra Pradhan said, "Congress party purchased oil bonds of Rs 1.44 lakh crore that we inherited. Not only this, we also paid Rs 70,000 crore on interest part alone. In total, we (govt) discharged our responsibility by repaying over Rs 2 lakh crore." He went on to attribute high fuel prices to the pending payments on oil bonds.

Our Govt. pays Rs. 10000 Cr interest for this every year & Oil Companies had to sell these bonds at discounts as there was no takers for these. People save for their future generations but our friends in the UPA burdened the future generations for temporary gains & politicking.

The opposition has alleged that the minister has overestimated the payments made by the government, and has hence misled the populace. One of the first policy interventions of the NDA government after it came to power in 2014 was to deregulate the price of diesel. 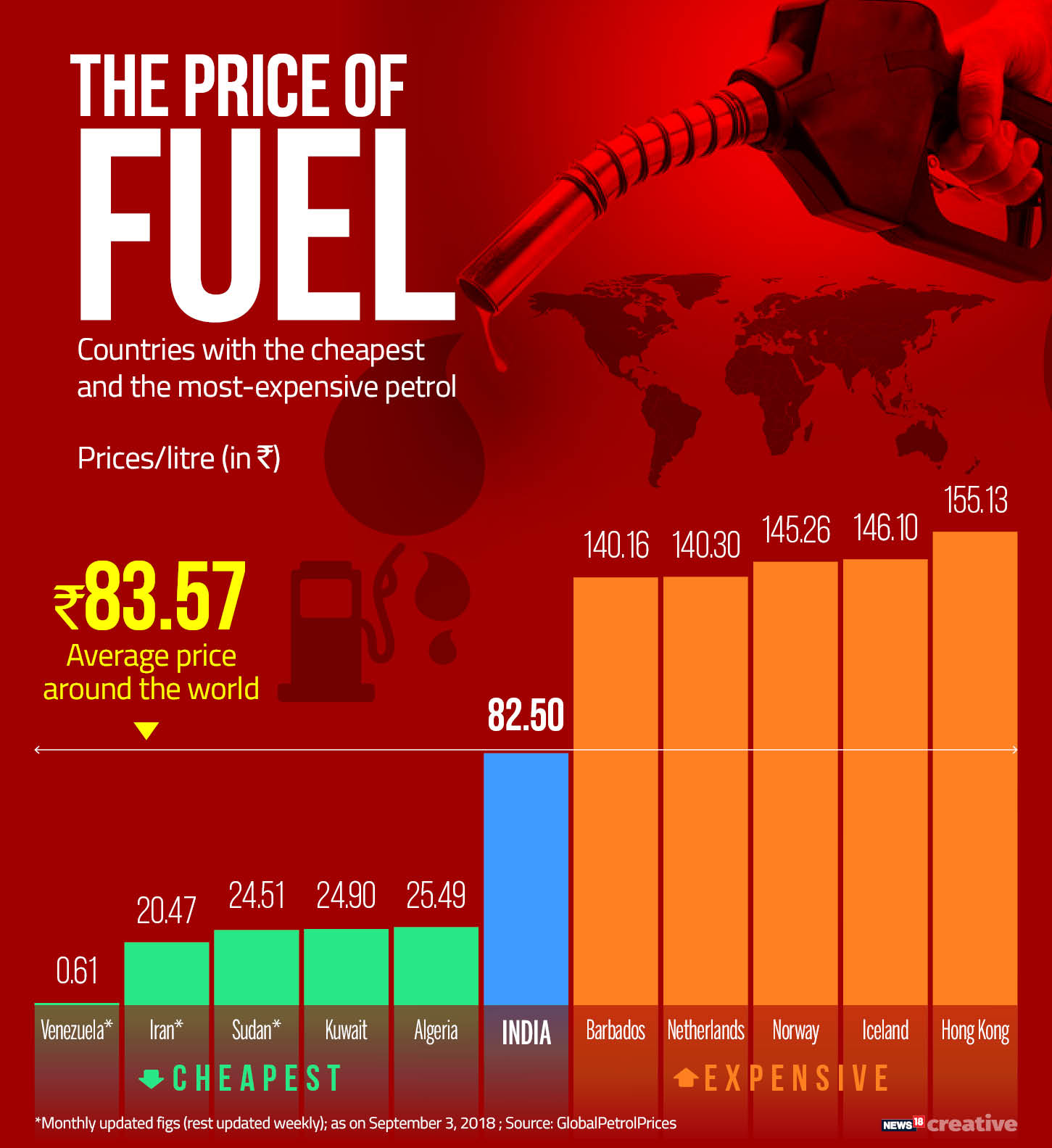 Oil bonds were issued by the UPA government when fuel prices were regulated. By doing so, the government shielded customers and domestic businesses from the vagaries of the global market for crude oil. However, subsidies were soon done away with, and excise duties were also increased.

What are oil bonds?

Oil bonds are issued by the government to compensate oil marketing companies (OMCs), fertiliser companies and the Food Corporation of India (FCI) for losses borne by them in the process of regulating prices. They are akin to government securities. These usually have a long maturity period extending over 15-20 years. Interest payments will be due at fixed intervals during the tenure of the bond.

These debts are not accounted in the fiscal deficit number of the issuing year. Unlike cash subsidies, there is no direct cash flow. Moreover oil bonds do not qualify as statutory liquidity ratio (SLR) securities, making them less liquid when compared to other government securities. Oil bonds can be traded for liquid cash by sale in the secondary market to insurance companies, banks, and other financial institutions.

The then-UPA government took to issuing oil bonds as a substitute for subsidies between 2005 and 2010. High crude prices and the blowback from the recession of 2008 increased fiduciary pressure on the government. By raising capital through bonds, these payments could be made in a deferred manner without causing a major escalation in prices, thus insulating customers.

Between 2005 and 2009, the government issued bonds worth Rs 1.4 lakh crore. This was done to partially compensate OMCs for recoveries amounting to Rs 2.9 lakh crore. Under-recoveries are the difference between the cost of purchasing crude oil in the international market and the price at which petroleum products are sold in the domestic market.

In the aftermath of the recession, OMCs were facing large under-recoveries. This presented the government with the dilemma of ensuring financial stability of OMCS, many of which are government-owned, while taking into account political repercussions of allowing fuel prices to rise. Oil bonds were chosen as the vehicle to dampen the pressure on OMCs while keeping prices in check.

On November 30, 2010, the Minister of State for Petroleum and Natural Gas Jitin Prasada informed Rajya Sabha that the debt burden was to be shared by public sector oil companies, the government, banks, and other stakeholders.

The first step towards deregulation was taken in 2010 with the announcement that oil bonds will be discontinued, and OMCs will be paid in cash. In June 2010, petrol prices were deregulated, mirroring the market price of crude. Diesel went the same way in October 2014. In June 2017, the NDA adopted the system of dynamic fuel pricing whereby the retail price of petrol and diesel fluctuate on a daily basis.

The UPA government issued bonds valued at Rs 1.44 lakh crore between 2005 and 2010. However, only two bonds worth Rs 1,750 crore each matured during the tenure of the NDA government. This implies that the government has only repaid Rs 3,500 crore. The next payment will be due in October 2021. No new bonds were issued hence. According to the annexure – 6E of the Budget documents for 2016-17, 2017-18, and 2018-19, the total value of special securities issued to oil market companies in lieu of subsidies has remained constant. More importantly, only two bonds matured during this period, contradicting the NDA government’s claim that high oil prices were on account of interest payouts on outstanding bonds worth Rs 1.44 lakh crore.

How are petroleum products taxed? Taxes amounted to roughly a third of petrol prices in New Delhi in May 2014. According to Hindustan Petroleum data, the share of taxes as a component of the final price has risen to 45 percent in September 2018. The tax on petroleum prices is much more in Mumbai. It can be argued that despite enjoying windfall gains from the drop in global oil prices, the NDA government opted to shore up revenue by raising taxes, instead of passing on benefits to customers. The fuel market is a major contributor to the government coffers. Records maintained by the PPAC show that of the Rs 18.23 lakh crore that flowed into government coffers between 2014-15 and 2017-18, Rs 11.04 lakh crore was in the form of central taxes. The state exchequer netted Rs 7.19 lakh crore. 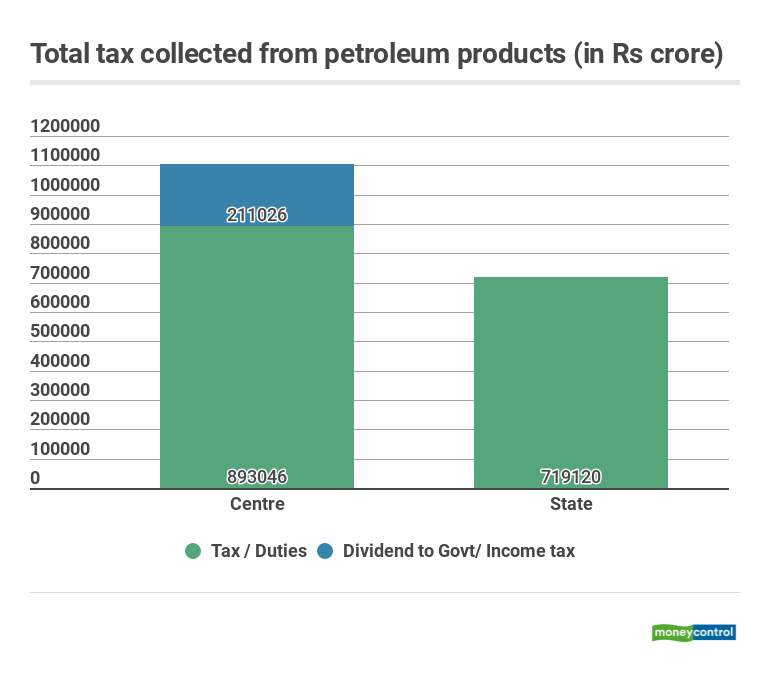 The depreciation of the rupee's value is also contributing to escalating fuel prices. India imports majority of its oil, and a weakening rupee will translate into higher costs. A corollary of this is that tax collection will further go up. Since retail prices are now linked to the global market, higher fuel prices will translate into heftier fuel bills for customers lining up to fill tanks at fuel stations. Since excise duty is a percentage of the base price at which fuel is exported, the greater the price of acquiring fuel, more money will go into the government's kitty.

With the lion's share of interest payments on oil bonds yet to mature, it is incorrect to say that these payouts have driven up prices. As they are spread over a period of time, the debt burden will not be as severe as it is being made out to be.

Moreover, under the Indian budgeting system, it is not possible to pre-pay bonds as the government prepares budgets based on cash flows, and not on an accrual basis. Government bonds are common procedure since budgetary expenditure is, to an extent, financed through bonds which will have to be repaid over the course of time. If the government had the cash to make an up-front payment, the premise of taking on debt at interest would be defeated.