The induction of Aditya Puri on the board and acquisition of Medlife is in the run up to the company's IPO. The former head of HDFC bank has been in demand in the corporate world, and will join the board of PNB Housing Finance as an investor nominee, while Strides Group’s Stelis Biopharma announced his appointment as a chairman of the board.

Aditya Puri, the former CEO & MD of HDFC Bank, has joined the board of API Holdings, the parent company of medicine-delivery platform PharmEasy, and will soon be chairing it, sources familiar with the development said.

The appointment comes ahead of the company’s planned blockbuster IPO.

“Aditya Puri’s vast experience will help scale up the company. Healthcare has huge potential and can grow as banks did in the country,” a source said.

The company declined comment on the appointment. “As a policy, we don’t comment on market speculation,” it said in an emailed reply to Moneycontrol. Aditya Puri did not respond to an e-mail query from Moneycontrol 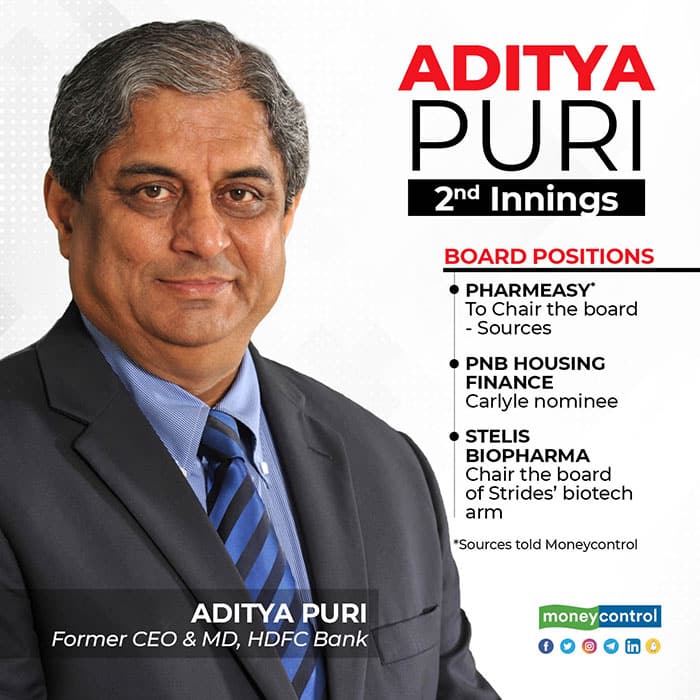 Aditya Puri recently announced an investment in PNB Housing Finance along with Carlyle and other investors. Puri will be joining the board of PNB Housing as an investor nominee. He joined Carlyle as a senior advisor.

Earlier, Strides Group appointed Puri as the chairman of the board of Stelis Biopharma, biotech arm of Strides Pharma.

Induction of Aditya Puri, acquisition of Medlife is in the run-up to PharmEasy’s IPO. Sources suggest the medicine delivery platform aims to list in Q4FY22 and expects over $5 billion valuation after the Medlife acquisition.