172@29@17@107!~!172@29@0@53!~!|news|business|economy|poor-credit-disbursal-and-visible-green-shoots-paradoxical-mismatch-5963141.html!~!news|moneycontrol|com!~!|controller|infinite_scroll_article.php!~!is_mobile=false
FREE virtual training session on Passive Income Secrets: October 24 and 25, 2020, 10am to 1pm. Register Now!
you are here: HomeNewsBusinessEconomy

The pertinent question that one needs to ask is: Is credit growth declining due to a lagged effect of a weakened demand being faced by corporates?

The coronavirus pandemic has sent financial markets worldwide into a tailspin. In order to provide a relief from its adverse impact, an amalgamation of monetary, fiscal and regulatory interventions were announced by the government along with the Reserve Bank of India (RBI).

The corrective measures were initiated to mitigate the negative impact of the novel coronavirus on the demand as well as supply side of the economy and to ensure close to normal functioning of the financial markets.

The RBI in no way failed to respond to the unprecedented economic crisis due to pandemic. Series of monetary measures were announced to strike a balance between financial stability, preserving the economic value of businesses and protecting depositors. It was done to shield the macroeconomic and financial environment from the negative influence of the virus and mitigate its bearing on credit demand and asset quality of scheduled commercial banks. The easing of financial conditions was done to boost system level liquidity and sector specific funding. However, it needs to be investigated if the deployment of conventional and unconventional tools that the RBI resorted to, for restoring financial stability has yielded the desired results?

As per data under the reverse repo window there has been a dramatic increase in deposits by banks with RBI from Rs 41,214 crore as on January 1 to over Rs. 6.3 lakh crore on May 28. Is this a reflective of the fact that businesses which have been facing the onslaught of liquidity stress and tightening of financial conditions amidst disruptions of cash flows and working cycles are still not borrowing?

On further investigating the credit and deposit growth numbers it can be seen that deposit growth (8.6 percent in March) clearly outweighs credit growth (5.9 percent in March) in the Indian banking system. The inability to lend has become so dominant that banks have huge amounts of cash lying unutilised. This clearly outlines a lack of credit-offtake in the Indian financial system.

A micro level analysis of bank credit growth, time deposit growth and demand deposit growth numbers shows that bank credit, which was already on a decline in Q3 and Q4 of 2019-20 witnessed a further downswing. Rather, the difference between deposit and credit growth numbers for India has widened even more during the pandemic. Contrary to RBI infusing liquidity in the financial system, bank credit growth which in March 27 was at 6.3 percent saw a fall to 5.4 percent as on September 11. It only witnessed a temporary increase to approximately 7 percent in April. So, the pertinent question is: Are corporates not engaging in borrowing from banks? 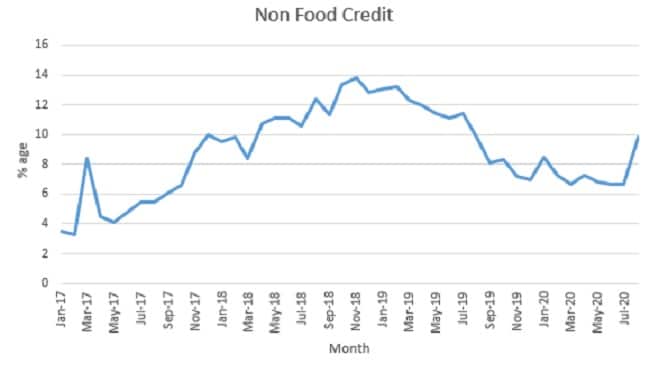 Decline in demand for non-food bank credit growth reflects a declining demand by industry and coincides with declining demand in the economy and falling capacity utilisations. On the flip side, thrusting in money into banks and financial institutions without boosting demand could result in increasing of bad loans and non-performing assets. The excess liquidity in the financial system could result in a huge social cost. This could lead the country into a liquidity trap with a large increase in money supply and not much use of it by corporates and households.

Thus, the pertinent question that one needs to ask is: Is credit growth declining due to a lagged effect of a weakened demand being faced by corporates? Have supply side interventions been able to clear supply-side bottlenecks in the Indian economy and generate demand?  Signs of green-shoots observed in the month of September do indicate revival of the economy. Purchasing Managers’ Index (PMI) at 56.8 was the highest in eight and half years; GST collections at Rs 95,480 crore was the post-pandemic record collections and also 4 percent higher than the corresponding month of the last year; E-way bills at 57.4 million set a record; power demand at 169,000MU showed 4.8 percent increase. Importantly, the number of persons seeking support from MGNREGS at 29 million was the lowest since May which is a definite sign of improvement in employment opportunities. The FPIs would not have become net buyers of Indian debt instruments after 11 months without seeing positive signal in Indian economy.

Pick up in consumer demand is likely to get further intensified during Q3 and Q4 of FY21. In this highly uncertain economic environment retailers are pinning their hopes on Q3 festive demand i.e. from Diwali to the onset of the New Year 2021 to revive flagging sales. Festive season typically accounts for 20-30 percent of the annual sales and businesses are waiting with bated breath for the season to yield positive results for them. Attractive offers are being lined up to influence consumer demand and the pedal has been pressed on aggressive promotions and advertising campaigns. To be able to bring cheer and respite from the pandemic linked slumber it is time for companies to woo back customers through behavioural nudges.

However, baffling question here is the mismatch between RBI's noble intentions in facilitating availability of liquidity vis-a-vis the corporate sector's unenthusiastic response in availing the offer. Does it mean that the corporate sector is flush with cash and hence need not rely too much on the banking system? In a way it is a good sign now that the government borrowings is to expand horizontally as well as vertically.